Telegram Messaging on Sunday announced a new privacy rights feature that allows user to delete not only their own comments, but also those of all other participants in the message thread on all devices that received the conversation. Although the move is meant to bolster privacy, it’s likely to spark some controversy. 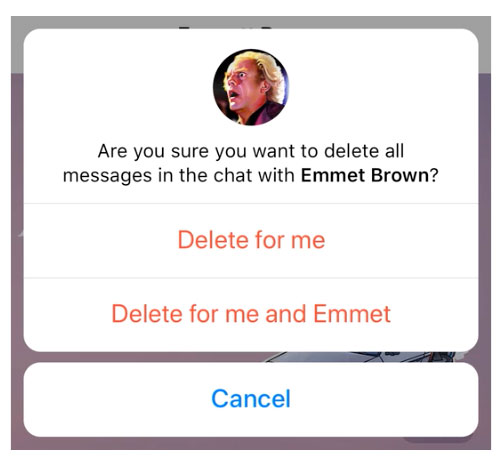 Telegram also changed a policy regarding how users can or can not forward another’s conversation.

“Many people use chat apps under the assumption that their communications are private, so it is very important that chat apps meet those expectations of privacy,” he told LinuxInsider.

Obviously, if you’re a dissident in an autocratic country that cracks down on free speech, privacy is very important. However, it is also important to everyday people, said Bischoff, for “sending photos of their kids, organizing meetings, and exchanging Netflix passwords,” for example.

Telegram’s new unsend feature could stir controversy over the rights of parties to a message conversation. One user’s right to carry out a privacy purge could impact other participants’ rights to engage in discourse.

Regardless of who initiated the chat, any participant can delete some or all of the conversation. Criticisms voiced since the change in the company’s unsend policy suggest that the first participant to unsend effectively can remove control from everyone else. Telegram’s process allows deletion of messages in their entirety — not just the senders’ comments.

The chat history suddenly disappears. No notification indicates the message thread was deleted.

Telegram Messenger, like its competitors, has had an “unsend” feature for the last two years. It allowed users to delete any messages they sent via the app within a 48-hour time limit. However, users could not delete conversations they did not send.

Facebook’s unsend feature differs in that it gives users the ability to recall a sent message — but only within 10 minutes of sending it.

“Telegram doesn’t enable end-to-end encryption by default, but you can get it by using the “Secret Chats” feature,” said Comparitech’s Bischoff.

End-to-end encryption ensures that no one except the intended recipient — not even Telegram — can decrypt messages, he said. WhatsApp and Signal encrypt messages by default.

Telegram has an incredibly strong brand, according to Jamie Cambell, founder of Go Best VPN. It has a reputation for being the app of the people, since it’s been banned from Russia for not providing the encryption keys to the government.

“Its founder, Pavel Durov, actively seeks to fight censorship and is widely considered the Mark Zuckerberg of Russia,” he told LinuxInsider.

The new unsend feature gives millions of users complete control of any private conversation they have ever had, according to Telegram. Users can choose to delete any message they sent or received from both sides in any private chat.

“The messages will disappear for both you and the other person — without leaving a trace,” noted the Telegram Team in an online post.

The change was orchestrated “to improve the privacy of the Telegram messaging application,” the post continues. “Its developers upgraded the Unsend feature “to allow users to remotely delete private chat sessions from all devices involved.”

The privacy changes are to protect users, according to the company. Old forgotten messages might be taken out of context and used against them decades later.

For example, a hasty text sent to a girlfriend in school can return to haunt the sender years later “when you decide to run for mayor,” the company suggested.

Telegram users can delete any private chat entirely from both their device and the other person’s device with just two taps.

To delete a message from both ends, a user taps on the message and selects the delete button. A message windows then asks the user to select whether to delete just his/her chat messages or those of the other participants as well.

Telegram’s new feature lets users delete messages in one-to-one or group private chats. Selecting the second choice deletes the message everywhere. Selecting the first choice only removes it from the inbox of the user initiating the delete request.

The privacy purge allows users to delete all traces of the conversation, even if the user did not send the original message or begin the thread.

Telegram also added an Anonymous Forwarding feature to make privacy more complete. This feature gives users new controls to restrict who can forward their messages, according to Telegram.

When users enable the Anonymous Forwarding setting, their forwarded messages no longer will link back to their account. Instead, the message window will only display an unclickable name in the “from” field.

“This way people you chat with will have no verifiable proof you ever sent them anything,” according to Telegram’s announcement.

Telegram also introduced new message controls in the app’s Privacy and Security settings. A new feature called “Forwarded messages” lets users restrict who can view their profile photos and prevent any forwarded messages from being traced back to their account.

The Telegram application programming interface is 100 percent open for all developers who want to build applications on the Telegram platform, according to the company.

Telegram may be venturing further into open source terrain. The company might release all of the messaging app’s code at some point, suggests a note on its website’s FAQ page. That could bode well for privacy rights enthusiasts.

“Releasing more of the code will have a positive effect on Telegram’s appeal, barring any unforeseen security issues. That allows security auditors to crack open the code to see if Telegram is doing anything unsafe or malicious,” Bischoff added.

Telegram’s new take on protecting users’ privacy rights is a positive step forward, said attorney David Reischer, CEO of LegalAdvice.com. It benefits both customers who want more control over how their data and communications are shared and privacy rights advocates who see privacy as an important cornerstone of society.

It is not uncommon for a person to send a message and then later regret it. There also can be legal reasons for a person to want to delete all copies of a previously sent message.

For example, “a person may send a message and then realize, even many months later, that the communication contained confidential information that should not be shared or entered into the public domain,” Reischer told LinuxInsider.

Allowing a person to prevent the communication from being forwarded is also an important advance for consumers who value their privacy, he added. It allows a user to prevent sharing of important confidential communications.

“Privacy rights advocates, such as myself, see these technology features as extremely important because the right to privacy entails that one’s personal communications should have a high standard of protection from public scrutiny,” Reischer said.

Still, there exists a negative effect when private conversations are breached through malicious actors who find an unlawful way to circumvent the privacy features, he cautioned. Ultimately, the trust and confidence on the part of senders could be misplaced if communications turn out to be not-so-private after all.

Privacy is extremely important to those who use chat communications — at least those who are somewhat tech-savvy, noted Cambell. For Telegram, privacy is the most important feature for users.

Privacy is extremely important to many Americans who want to have private conversations even when the communications are just ordinary in nature, said Reischer. Many people like to know that their thoughts and ideas are to be read only by the intended recipient.

“A conversation taken out of context may appear damnable to others even when the original intent of the message was innocuous,” he said.

Additionally, many professionals of various trades and crafts may not want to share their confidential trade secrets and proprietary information, Reischer added. “Privacy is important to all business people, and there is typically an expectation of privacy in business when communicating with other coworkers, management, legal experts or external third parties.”

Telegram added new features that made the app more efficient to use. For example, the company added a search tool that allows users to find settings quickly. It also shows answers to any Telegram-related questions based on the FAQ.

The company also upgraded GIF and stickers search and appearance on all mobile platforms. Any GIF can be previewed by tapping and holding.

Sticker packs now have icons, which makes selecting the right pack easier. Large GIFs and video messages on Telegram are now streamed. This lets users start watching them without waiting for the download to complete.

VoiceOver and TalkBack support for accessibility features now support gesture-based technologies to give spoken feedback that makes it possible to use Telegram without seeing the screen.

Lost Ark Beta Preview – The MMO Diablo Would Like to Be?

Valve Is ‘Working Hard’ to Meet Index Demand Ahead of Half-Life: Alyx Release