Designer Luca Redwood has a knack for turning puzzle games into something bigger. It started with 10000000, which combined match-3 and RPG elements into rapid-fire action, and it continued with You Must Build a Boat, which added dungeon-crawling adventure gameplay to the formula. But Redwood’s latest game is also his most ambitious: with Photographs, he’s out to prove a puzzle game can also tell a story.

The game is divided into five chapters, each of which tells a different story. They’re all fairly short; as long as you don’t get majorly stuck on any puzzles, you can finish each chapter in around 30 minutes. You start out following the story of an alchemist, an old man with an apothecary shop in the woods and a young granddaughter who eventually falls ill. Later stories follow a seemingly disparate group of people, like a champion diver and the editor of a struggling newspaper. 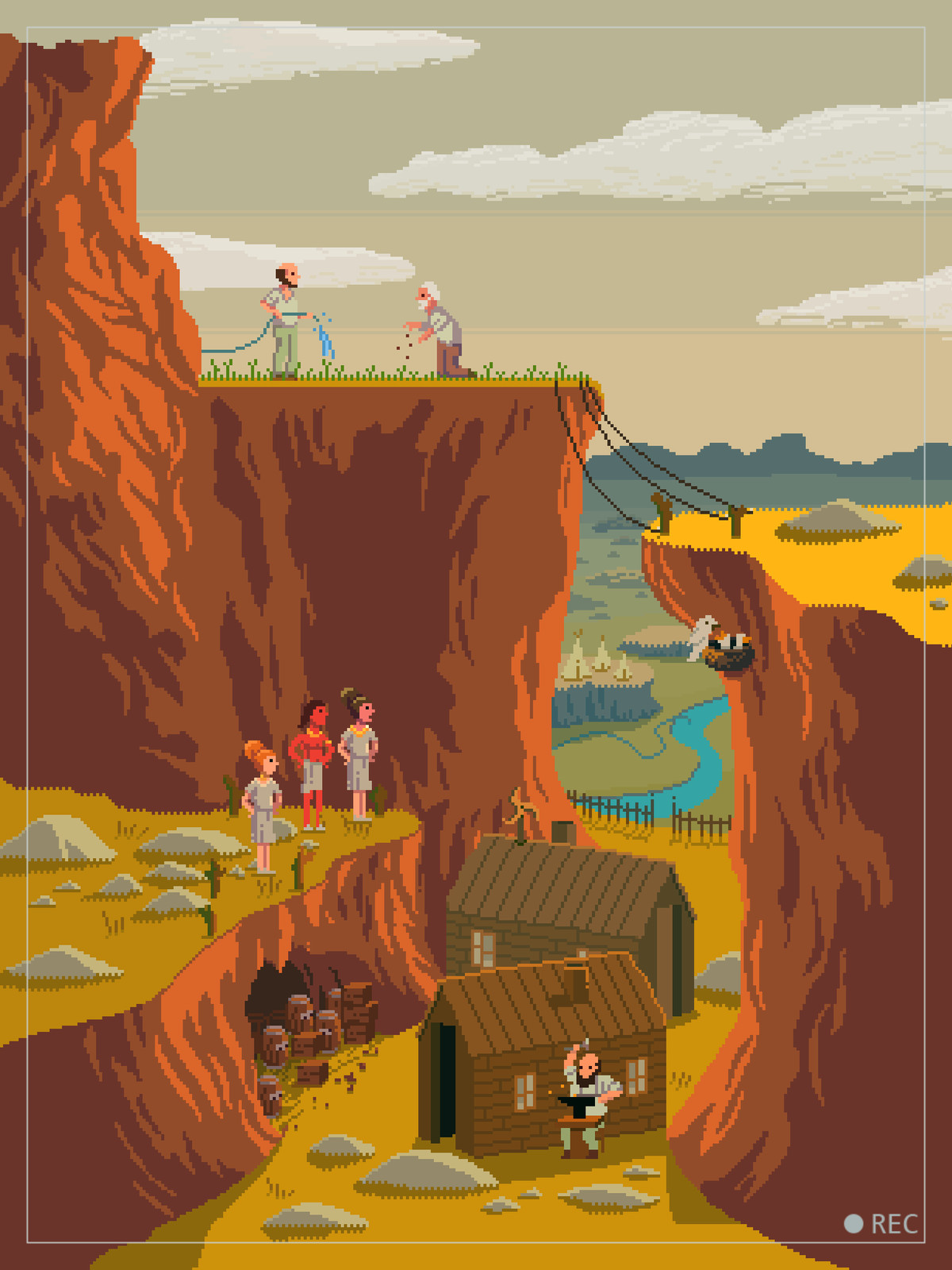 Not only does each chapter in Photographs tell a different story, but each one has its own unique style of puzzle. As you listen to the alchemist’s story, for instance, you’ll be presented with puzzles where you have to slide figures across a grid to specific points. Slowly, you’ll realize that what you’re doing in the puzzles actually correlates to the story itself. For example, as the granddaughter becomes sick, it becomes increasingly challenging to move her figure around. For the diver, you’re bouncing balls off of platforms, while a story about colonialism has you creating paths by plowing fields.

This structure is somewhat reminiscent of the iPhone romance game Florence, which similarly used game mechanics as a storytelling tool. The main difference is that in Photographs, the gameplay is still very much puzzle-oriented. They can get challenging, and the way they change to fit the narrative is mostly very clever. (Unfortunately, it’s hard to say too much about the changes without veering into spoiler territory.) But this also means that there will probably be moments when you get stuck, and you will have to put the game down and come back later with fresh eyes.

As you solve the puzzles, you’ll hear a voiceover from that story’s particular protagonist detailing what’s going on, and you’ll see photographs of key scenes. Along the way, the pixel art background scene will steadily change. The building for the struggling newspaper will slowly fall into disrepair, for instance, or the colonizers will quickly set up a dominating presence on new land. All of the stories are very different, but they share one common characteristic: tragedy. Photographs isn’t a particularly cheerful game.

For most of the game, you’ll be wondering how these characters are all connected. Every story seems to exist in its own unique time and space. Some are set in the modern day, while others are rooted in fantasy. Thankfully, Photographs pulls all of these threads together in the final chapter, which wraps things up in a satisfying, albeit still tragic, way. By the end, you’ll be convinced that a puzzle game can indeed tell a story, and you might never look at sliding blocks quite the same way again.

Photographs is available now on iOS and Steam, with an Android version coming soon.

The New Mutants has a new August 2020 release date

The 14 biggest trailers and announcements from The Game Awards 2020