Feren OS might well be the Linux computing game-changer that lures you away from your current operating system.

Feren OS is based on Linux Mint 19 and the Cinnamon desktop environment that Linux Mint devs developed. This distro currently does not give you any other desktop options. However, it comes with a wide assortment of configuration choices that let you tweak the look and feel into almost any customized appearance you could want. 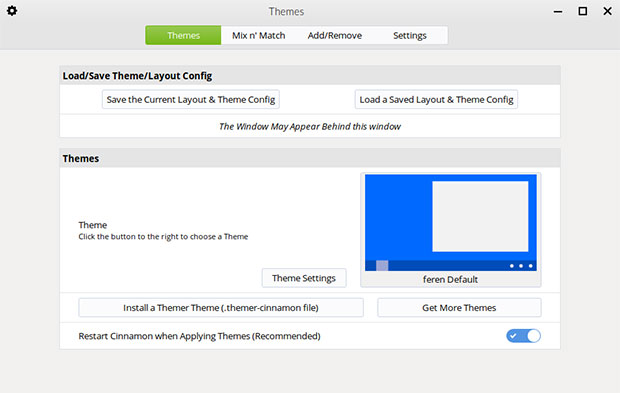 The Theme Changer tool lets you alter the appearance of icons, background, window decoration, and just about everything else that determines how Feren OS looks on the screen.

The latest snapshot of Feren OS, 2019.04, was released on April 17. Part of what makes Feren OS so attractive is its developmental strategy. This distro follows a partial rolling release system that constantly updates the OS for its lifetime.

A true rolling release ensures that you never have to handle ISO installations again. That means no more configuring settings and getting the upgrade working with the same look and feel as the current version.

Feren OS pushes software updates and security patches as they are ready, just like many other Linux distros. In addition, the U.S.-based developers push a refreshed system update via a new ISO download at predetermined intervals. After you download the new ISO, let the software manager automatically integrate the latest core elements and system upgrades.

This is a very workable arrangement. It gives you the best of both upgrade worlds. It spares you the hassle of waiting for the latest computing ingredients. It has the built-in automated convenience of upgrading without the manual labor.

Feren OS first appeared in late 2015. Since then, the distro’s community and the OS’ performance have gained considerable maturity. Feren has its own personality, so you will not feel like you are using a Mint clone. Even the in-house customization of the Cinnamon desktop environment gives it a considerably different atmosphere.

You’ll find that it is a polished Linux distro that is well-suited to be a replacement for any Linux distro, whether you are a Linux newcomer or a seasoned power user — that is, of course, if you do not have an aversion to the Cinnamon desktop environment. With that qualification, Feren OS comes close to being an ideal replacement for Microsoft Windows and macOS.

If you are not familiar with the Cinnamon desktop, you do not have to worry about much of a learning curve. It is easy to use, especially with all of the customized features the Feren developer added.

Not everyone finds the Cinnamon desktop to be an ideal computing environment, but for me, Cinnamon offers the best all-around combination of features, productivity and ease-of-use.

Cinnamon has a basic computing layout that is comfy for users coming from most other platforms. Its default settings meet most users’ needs. Its collection of panel applets and desktop fluidity choices let you take what you like and leave what you don’t.

Easy Set Up and Go

Feren OS is easy to install. The new Calamares system installer is also very fast. I pulled off the storage shelf a long-unused laptop that ran Windows 7 on an Intel Core i5 processor with 4 GB of RAM. This laptop had multiple operating systems, so I geared up to handle partitioning and GRUB file editing.

Neither was an issue. The Feren installer offered three choices: install alongside, replace an existing partition, or set up manual partitioning. I clicked on one of the volumes and sat back while the installer replaced what was there with Feren OS.

After responding to a few set-up options some 10 minutes later, the reinvigorated laptop was waiting for a reboot. After a minute or two, I was looking at the default Feren background image and a freshly minted Cinnamon desktop.

On first run, you have the option to install third-party codecs. That same launcher is available in the Welcome Screen that appears on subsequent logons. However, the additional installations failed due to an error involving Ubuntu.com.

The initial setup screen offers the option of selecting your desired theme layout. There are two default layout options involving screen color and a choice of desktop clock or panel clock. Other layout options are Windows XP, Windows 7/8, Windows 10, macOS or Linux Mint.

Feren OS includes animations for extra eye candy in the default experience. You can adjust this setting later in System Settings > Effects.

The Theme Changer tool lets you alter the way icons, backgrounds, window decorations, and just about everything else in Feren OS look on the screen. The Themes manager makes personalizing the desktop easy.

This distro provides a handy tool not available in most other Linux distros. The Windows Transfer Tool makes it next to foolproof to move your Microsoft Windows documents and some settings to the Feren OS partition during the installation process. 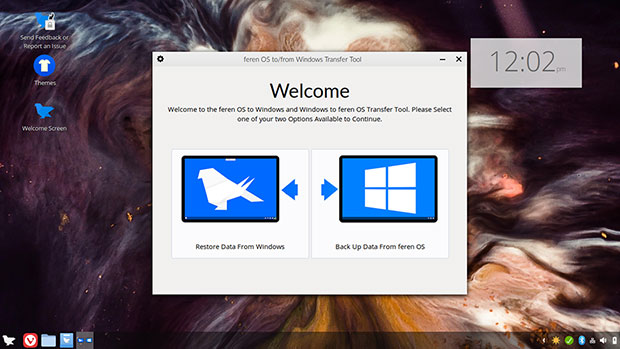 Feren OS has a Windows Transfer Tool to move your Microsoft Windows documents and some settings to the FerenOS partition during the installation process.

This makes Feren OS suitable for those migrating to Linux or at least to this operating system. Feren OS offers a specialized software repository that is colorful and efficient to use.

A few other Linux distros attempt to distinguish themselves from more mainstream Linux offerings. However, the in-house customization of the Cinnamon desktop environment gives Feren OS an atmosphere that differs considerably from the current Linux Mint Cinnamon iteration.

The look and feel, along with the easy operation, resembles the Zorin OS and Condres OS. But Feren OS has what Zorin OS lacks — the Cinnamon desktop.

Feren OS is not a retread of Zorin, which runs the GNOME desktop (or an alternative edition that runs the Xfce desktop); or Linux Mint itself; or Condres OS, an Arch-based distro that offers the Cinnamon distro. All of them are designed to look like classic Windows.

Feren OS displays a handful of system icons on the desktop if you want them. It shows a fully functional task bar or panel on the bottom of the screen.

The left side of the panel is home to the main menu button and four launch icons for the Web browser, the file manager, the Software Center and a launcher to install proprietary icons. The right end of the panel houses the notifications tray and systems tools launchers. 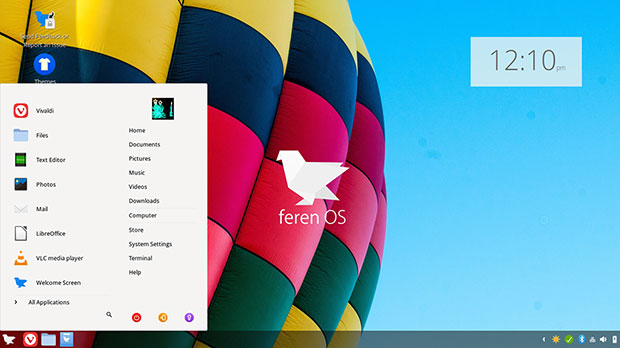 The Feren OS main menu is a change from the typical cascading displays used in Windows and many Linux distros.

A handy feature with Feron OS is the ability to keep the bottom panel visible but hide the work spaces switcher and other applet icons you add. These items tuck away automatically after a few seconds. A button slides them back into visibility to the left of the standard notifications area at the right end of the panel bar.

You can add a broad assortment of applets to that task bar. You also can choose from a library of desklets on the desktop to display various readouts, such as weather and system monitors.

The main menu is a change from the typical cascading display used in Windows and many Linux distros. It is a two-column menu display with the categories in the left column. The wider right panel lists installed software titles in rows.

Depending on how many software titles are installed, this panel slides out of sight and is replaced by another set of icons with titles as you click the buttons on the bottom of the menu.

A search window at the bottom of the left column lets you start typing the name of an application. A filtered list of what you might be looking for fills the right-hand column waiting for your selection. It is very classy!

Feren OS is one of very few Rolling Release Distributions taking the Stable Path over Bleeding Edge. I last looked at Feren OS almost nine months ago. This new snapshot release comes with a major overhaul and improvements over the January 2019 Snapshot. These include improvements to WinStyle and macStyle Window Borders (Metacity themes).

The distribution is still available in both 64-bit and 32-bit architectures. It also ships with the WPS productivity software, and the Vivaldi Web browser. This latest build involves lots of changes to theme designs.

Out of the box, Feren OS in not a good choice if you want to play games. You have to track down your own Linux games. PlayOnLinux and Steam won’t be waiting for you in the menu.

Feren OS is a nearly flawless Linux computing platform. This distro is practically maintenance free. The developers have taken the best parts of several innovative Linux distros and seamlessly integrated them into an ideal computing platform.

Feren OS is attractively designed and has just enough desktop animation to make using it a tad bit more interesting.

Other than the missing games category in the main menu, this latest snapshot is a bit skimpy on including a better collection of applications. That is not a bad thing in terms of sensitivity to software bloat, but the developers should at least provide automated tools to download software bundles similar to what was included in previous releases.

Still, Feren OS is a nice alternative to Linux Mint, which has gotten sluggish and slow since the version 19.1 release. Feren OS is an easy stepping stone to transition to Linux from Microsoft Windows and macOS. It is also a satisfying change for more experienced Linux users.

TikTok is giving some users a less cluttered viewing experience