HBO’s Game of Thrones is a dense series with a huge weight of history behind its story. So in practically every episode, something happens that could use a little explanation. Every week, The Verge will dive into a scene or event from the latest episode of the series and explain how we got here. Whether you’re basically a Game of Thrones maester or you need a little reminder about previous events, we’ll try to help you keep your history straight.

This episode of Game of Thrones was… a lot. Bad decisions were made. People died. Seasons of buildup and character arcs came to their culmination. But instead of looking at that, let’s dive into what might be the least impactful (from a larger story perspective), but most anticipated (by certain fans) event: Cleganebowl.

Spoilers ahead for Game of Thrones in general, but especially season 8, episode 5, “The Bells.”

“Cleganebowl” was perhaps the best Game of Thrones theory, somewhere at the intersection of plausible books/show development, internet meme, and incredible catchphrase: GET HYPE! (Which seems to originate in this 2013 YouTube video, at least according to Know Your Meme.)

The long-speculated-over fan theory postulated that two brothers, Sandor “The Hound” Clegane and his older brother Gregor “The Mountain” Clegane, would eventually face off in a climactic duel. Fans dubbed this event Cleganebowl, a portmanteau of their shared surname and “bowl,” from the term used for many big football playoffs.

In tonight’s episode, “The Bells,” fans finally got the showdown they’ve been waiting for, with the Hound and the Mountain confronting each other for the final time. This showdown has been a long time coming. Here’s how we got here. 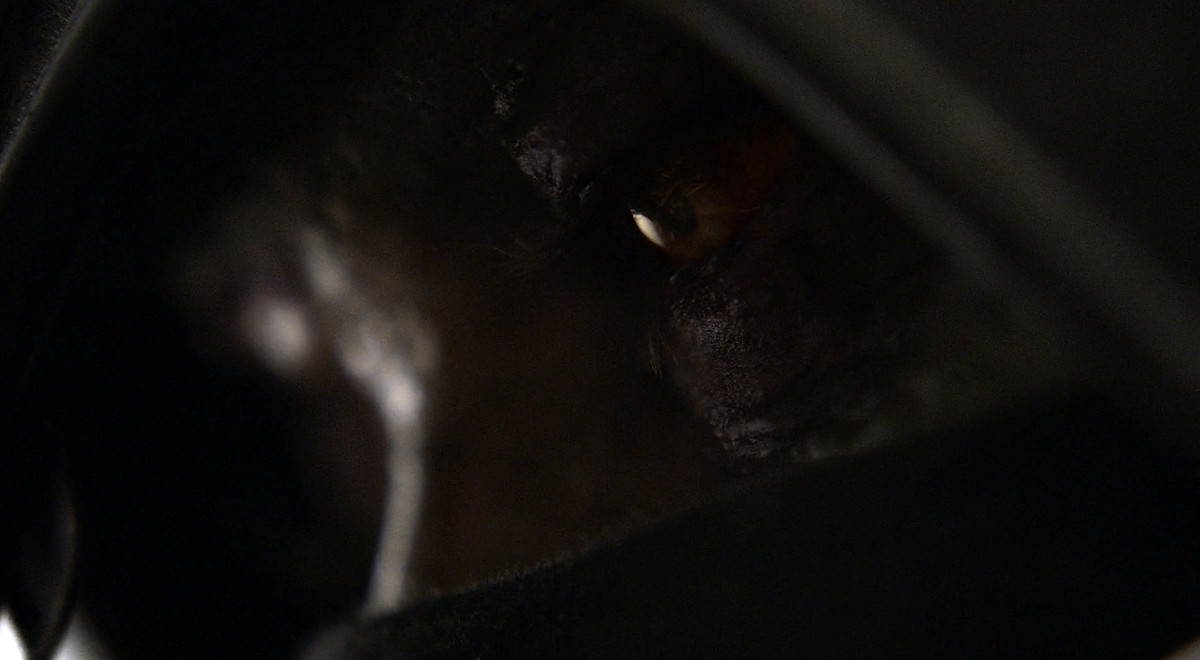 To understand why the Hound/Mountain face-off is important to fans, if not to the larger story, we have to go back to the beginning. Sandor and Gregor grew up together, and even in childhood, Gregor was cruel and inhuman. Gregor is infamously responsible for the horrific scars on his brother’s face — he shoved Sandor into a fire when they were both young, because Sandor played with one of Gregor’s toys.

Sandor’s fear of fire stemming from that moment never went away, and neither did his hatred. He despises his brother, knowing he’s a monster even as he’s made a knight of the realm. Gregor is a murderer, rapist, and general thug. And while the motives for his feelings about Sandor aren’t as clear, he clearly hates his brother just as much. 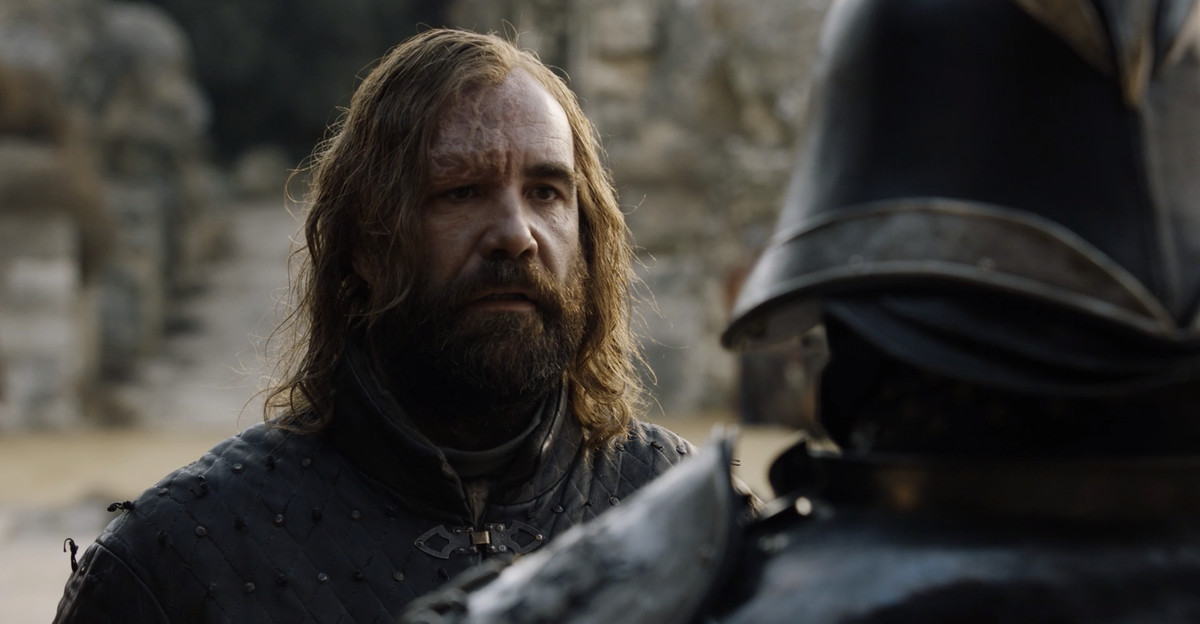 George R.R. Martin’s A Song of Ice and Fire novels not only haven’t reached the point of covering whether Cleganebowl happens, they haven’t fully made it clear whether either brother is still alive. In the books, Cersei faces off against the humiliations of the ascendant High Sparrow, concluding with the now-infamous Walk of Shame through King’s Landing. She’s met on the steps by the ousted ex-Maester Qyburn and a towering, silent giant — Ser Robert Strong, whom she names her champion for her upcoming trial by combat against the High Sparrow and the Faith of the Seven.

Fans theorized (and the show confirmed, at least for its own version of the story) that “Ser Robert” was the zombie-corpse of The Mountain, preserved and reanimated by Qyburn following Gregor’s poisoning by Oberyn Martell.

The other side of Cleganebowl, however, was where things got tricky. As book-readers and show-watchers alike know, Arya Stark left The Hound to die after a battle. (The circumstances differ between Martin’s novel A Storm of Swords and the season 4 episode on the show.) On the show, Sandor turns up again in season 6, revealed to have been saved by a septon played by Ian McShane. Later, he’s murdered, and The Hound avenges him. 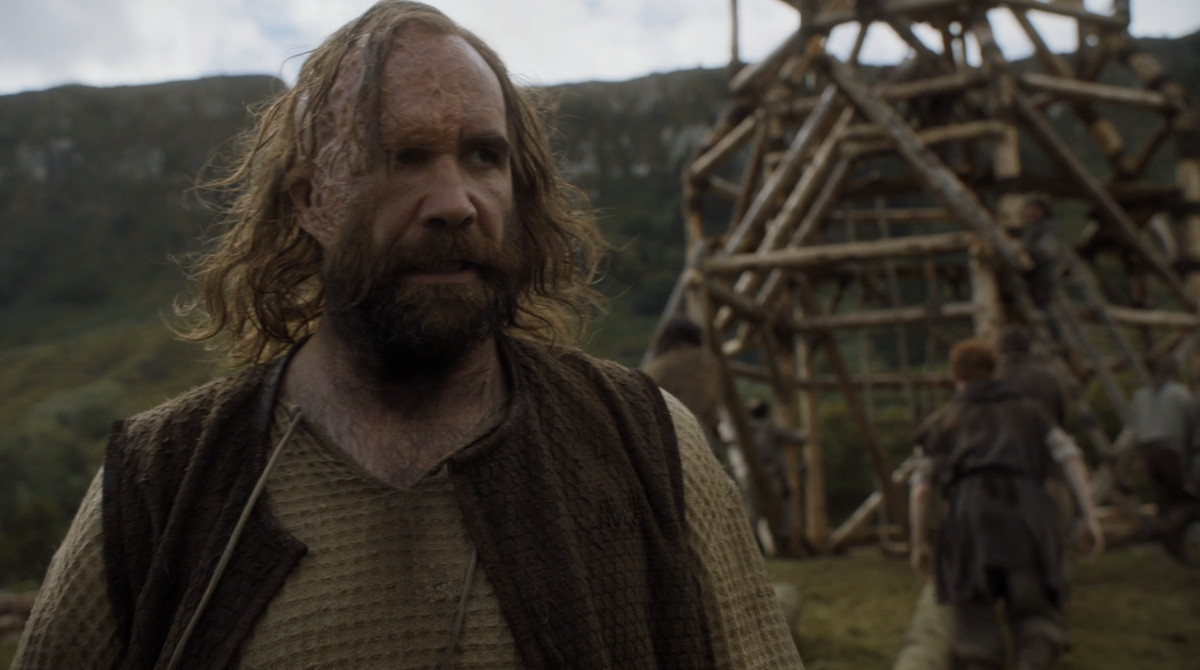 The story in the book is less clear, given that it’s incomplete. But in A Feast For Crows, Brienne of Tarth and Podrick Payne, while searching for The Hound (who they suspect has Sansa Stark in his custody), encounter a commune led by the Elder Brother, a priest who is extremely familiar with The Hound’s exploits and mindset. He claims he encountered the dying Sandor, and cared for him until he died. The Hound’s horse is also at the commune. But readers latched onto certain nuances in the Elder Brother’s choices of words (he refers to “The Hound” as dead, but says Sandor Clegane is “at rest”), as well as an unnamed gravedigger at the commune, with injuries similar to The Hound’s. It’s generally presumed that the gravedigger is Sandor, who’s put aside his violent past and joined The Faith. 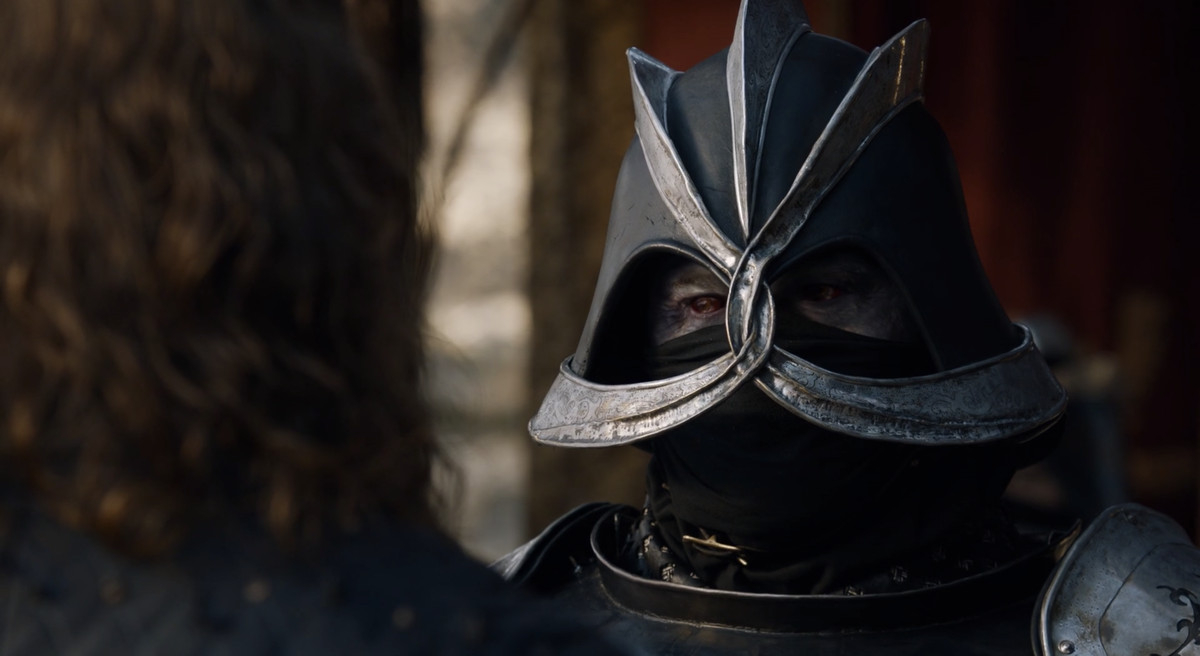 At thid point, events between the book and show get muddier. The original Cleganebowl theory was that the reformed Hound, representing the faith of the Seven, would face off against his sorta-undead brother for Cersei’s trial by combat, resulting in her downfall. (That also gels with another book theory, revolving around a prophecy that Cersei would be killed by “the Valonqar,” meaning “the little brother” — which could refer to Sandor, who is Gregor’s younger brother.) And who knows? That still might happen in the books, if they’re ever finished.

The show sees things play out differently. Cersei is unable to defend herself through trial by combat at all, after her son King Tommen outlaws the practice, due to the High Sparrow’s machinations. The resurrected Mountain never fights for her in single combat — instead, she solves the problem of the Faith Militant by nuking the entire High Sept with wildfire.

But there were two Clegane brothers out there, and even without anyone else’s life riding on their face-off, fans were holding out to see the two siblings settling things once and for all.

Which brings us to “The Bells,” episode 5 of the show’s final season. After eight years of hating each other a lot, the Clegane brothers reached the end of their roads, facing off against each other. Both sides saw callbacks to earlier duels: Sandor attempting to finish the job Oberyn Martell started by impaling the Mountain, and the Mountain trying to crush Sandor’s head as he crushed Oberyn’s. But ultimately, the battle could only have ever ended in one way: in fire, just like it began when they were young.

The question remains, though: why did fans care about this conflict so much? The answer is twofold. Part of it is how Cleganebowl theories came together: fans picked up on the clues Martin scattered throughout the books, filtered it through the show’s added lore, then blew it up into countless memes. It’s Game of Thrones fandom writ in microcosm, with all the ridiculous prophecies, backstories, revenge plots, and theories rolled into a single, easy-to-shout catchphrase.

Cleganebowl also highlights the diverging paths that the stories have taken over the years: The Hound in the books has seemingly achieved some measure of peace, for example, while the show’s iteration continues down his path of vengeance until it literally kills him. At least he manages to impart to Arya that the path she’s following doesn’t lead anywhere good.

The other reason? Because it was fun to see two of the show’s most lethal characters try to destroy each other, after spending so much time watching their separate paths: one of murder, bloodshed, and horror, and one of a sort of semi-redemption on the way to getting the ending he apparently wanted. Not every battle has to have the fate of the world resting on it. Sometimes, you just want to watch a good old-fashioned long-destined smackdown.

Trump will lose his Twitter ‘public interest’ protections in January

Galaxy S7 edge Owner Claims Her Phone Exploded While It Was Unplugged – Family...