I went to Lenovo Accelerate last week and feasted my eyes on one of the most innovative PCs I’ve ever seen. However, as I absorbed the rest of Lenovo’s announcements, I realized I was looking at just the tip of what could be a significant coming change in personal computers — one that could eclipse every change we have seen so far.

I’ll share my thoughts about that change and then close with my product of the week: the Lenovo Smart Tab — another innovative product from Lenovo that blends the features of an Amazon Echo with a tablet.

It is interesting that Lenovo is doing the old Jobs “one more thing” better than Apple is at the moment. I remain flabbergasted that Tim Cook effectively has thrown out virtually every practice that made Apple the power it was in the early part of this century and instead has been running that company into the ground.

That certainly has given companies like Lenovo an opportunity, and they have been stepping up with a series of laptop improvements that should, when complete, make tomorrow’s laptop so different from today’s laptops that they’ll likely have a different name.

Lenovo’s “one more thing” is a coming foldable screen laptop that is semi-hardened to military specifications, can fold down to something that is nearly in the size class of a smartphone. It gives up almost nothing in performance, while having all-day battery life and a persistent (likely 5G) connection.

Unfolded, it has a 13.3-inch OLED screen that has no visible seam when opened, making it the closest thing to a perfect e-book I’ve every seen.

The presenters brought this out at the end of the Lenovo Accelerate keynote, and I doubt there was a single person in the audience who didn’t want the damn thing. They’ll have to wait, though, because it isn’t due until 2020.

This wasn’t the only announcement at the event, however, and I think the blend of the things that Lenovo showcased eventually will result in an even more revolutionary result.

Like the failed IBM TransNote and the impressive HP Spectre Folio, Lenovo’s new foldable laptop will be covered in leather. I now have two leather-covered notebooks — that HP Folio and a Microsoft Surface Book covered in leather. (It’s from Toast, which also offers a wood cover that I’ve used — I like the leather much more.)

Leather makes a notebook, particularly one you want to use as a tablet or e-book, far more comfortable to carry. It is a much bigger difference than you think, and having experienced it with two products, I have a hard time wanting to carry a notebook not covered in leather.

The one exception would be a notebook covered in open weave real carbon fiber like that used in high-end exotic cars. I’m big car guy (we recently moved from a house that had a three-car garage to a smaller house with a six-car garage, because I feel I got my priorities straight).

Other PC makers, including Lenovo, have used carbon fiber in the past, but they tend to paint over it, losing the carbon fiber cool factor. Well, Lenovo is going to get carbon fiber right in one of its coming Halo notebook products, and it won’t be the last to do so.

Granted, this may play to a mostly male audience, but that same audience generally chases high-performance notebooks as well, and since I’m in that group I’m certainly excited.

Now one of the features that HP has made very popular is the electronic security screen. HP stepped out aggressively with what I still think is one of the most important security offerings brought to market. It recently improved that offering to reduce power and display a black screen to the unauthorized observer rather than a bright white screen.

What a security screen does is polarize the view so that only the person sitting directly in front of the screen can see what is on it. This is particularly useful if you are watching almost any current movie, and the obligatory but typically unnecessary sex scene pops up unannounced. However, it also prevents someone from seeing the confidential crap a lot of executives work on while flying or in public spaces.

There are folks who book seats on planes specifically to see what an executive is working on. The last time I checked, these efforts were mostly to try to get an illegal jump on the stock market, but with state players trying to steal intellectual property and large companies once again forgetting the risks of IP theft, this exposure is more problematic than most realize.

What Lenovo showcased was the first smart implementation of a security screen I’ve seen. You see, a lot of folks who have the screen don’t turn it on, because it reduces power and screen brightness. What one of the equipped Lenovo laptops does is watch for illicit viewers and then automatically fire up the screen — both protecting the data and privacy, and alerting the user that someone potentially is trying to steal the IP they are working on. This kind of active defense likely will define the next wave of personal computers and even smartphones, as we adapt to the world of state-funded IP theft and blackmail.

The Microsoft HoloLens is a wearable computer, if you think about it, and Microsoft’s Virtual Windows effort shifts much of the load from the device to the cloud, both anticipating a very different future.

Well, Lenovo was on that page with its own ThinkReality line of wearable AR computers. Just like Microsoft, it studied the initial users of the HoloLens solution and built an offering to address the resulting needs. You could argue that both Lenovo’s initial ThinkReality offering and HoloLens II are effectively second-generation offerings.

What makes the Lenovo offering different is that the company made both the battery and the controls remote, and it reduced the cost while bundling in a programing solution that is simple and will work with hardware other than Lenovo’s. This lowers the weight of the device and increases the amount of time you can use it (because you can swap out the four-hour battery).

Lenovo isn’t as advanced as Microsoft with either its breadth of solutions (Microsoft has a collaboration solution with Spatial, for instance) or its gesture-based user interface (though this is coming).

Still, I think this is going to lead to a class of wearable computers that will let users define the size of the virtual display, wear the device for extended periods, increasingly use a voice interface (which certainly will promote office-based noise canceling headphones), and perhaps eliminate the need for smartphones, tablets and PCs as we know them. Other than Microsoft, Lenovo is the only PC company that is solidly on this merged path.

I’m really only touching the tip of the iceberg of change, because behind this hardware is not only the coming wave of cloud-based personal computing and gaming, but a coming wave of virtual AIs that will be visible in these ever-more-common AR headsets.

This is one of the areas that Microsoft likely is going to jump on pretty hard, because it has been talking about rendering Cortana for some time, and it would be so cool to be able to talk to a physical rendition of your AI (not sure how Google is going to deal with this because talking to the Google logo isn’t going to be anywhere near as much fun as talking to a rendered Cortana, Alexa or Siri). Lenovo works with both Amazon and Microsoft, suggesting it might give you your choice first.

The bottom line is that I saw the future of the PC at Lenovo Accelerate, and that future is exceeding cool.

I use my Amazon Fire tablet a lot, and it typically resides near my bed where I have it charging. I have an Echo right above it for questions and alarms. It would be nice to have just one device that does both so I could free up some real estate on my relatively small end table. That is basically what the Lenovo Smart Tab is. It is a tablet wedded to a base, which performs like an Amazon Echo Show when docked and a tablet when undocked. It gives you a decent-sized screen for videos, for music lyrics, weekly forecasts or news. 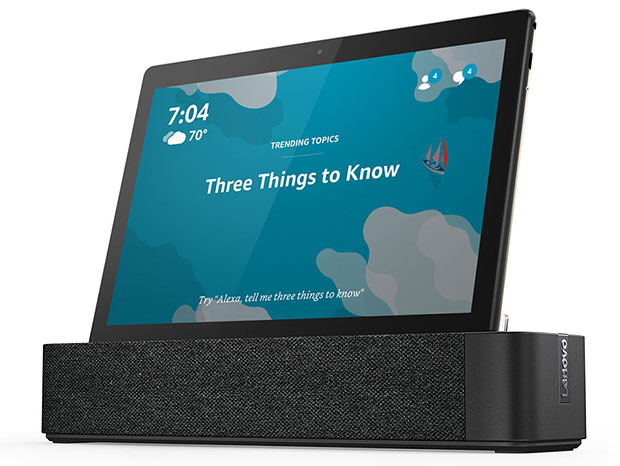 The base has enhanced Dolby Atoms sound, making this a decent source for music in the bedroom or kitchen (another ideal place for it). The only addition I’d make is some kind of integrated leather cover to provide better protection from a drop and make it easier to hold for extended periods.

The price difference is significant, with the M10 around $190 and the P10 around $300, or around $110 more. It may be worth it for the far larger batter and at least a GB more memory, though.

Oh, and both have a fingerprint sensor for secure login, something my Fire tablet currently lacks. Also, both will take up to a 256 GB micro-SD card, which should piss off Apple iPad users more than it likely does.

This product won the Best of Innovation award at this year’s CES. This is one of the few tablets with built-in GPS, making it handy if you want to use it in the car to navigate. Since it meets a need I didn’t even know I had until I saw it, the Lenovo Smart Tab is my product of the week.

Gearbox Will Be the Lead Developer on All Future Borderlands Games, Says Randy Pitchford

God of War Creator David Jaffe Joins Polish Studio Movie Games, May Get Financing for His New Projects from Them