Sony isn’t holding its usual E3 press conference this year, but the company has been gradually revealing parts of its next-generation PlayStation console. The PlayStation 5 will support 8K graphics, 3D audio, SSD storage, and backwards compatibility with existing PlayStation 4 titles. That SSD storage should boost load times significantly, and Sony offered up some clear demonstrations of exactly that today.

During a Sony investor relations meeting (PDF), the company demonstrated PlayStation 5 load times using Spider-Man to load cities and rapidly navigate throughout them. While the PS4 takes around eight seconds to load a Spider-Man level, the PS5 (identified simply as next-generation) does the same in less than a second. The PS5 can also better handle dynamic maps that load portions of a game as a player moves throughout them, avoiding the classic spinning circle or pause when you move from one part of a map to another.

Sony’s PS4 is still important for the next three years

Sony might be focused on its next generation PlayStation 5 console, but the company says the PS4 will “remain the engine of engagement and profitability in the next three years” and will provide early adopters for the next generation of PlayStation. Sony also previously revealed that the PS5 will use an eight-core CPU based on AMD’s third-gen Ryzen line, and include a GPU that supports ray-tracing graphics. Sony has not yet demonstrated ray-tracing on the PS5, though.

We’re still waiting to hear about pricing and release dates (not in the next 12 months) for the PS5, and even games and the general user experience, but Sony has started hinting at how it sees cloud gaming as part of the next generation. Sony is planning to leverage its existing PlayStation Now network to support 1080p and beyond games, while improving the quality of content and maximizing what it describes as its “off-console opportunity.” 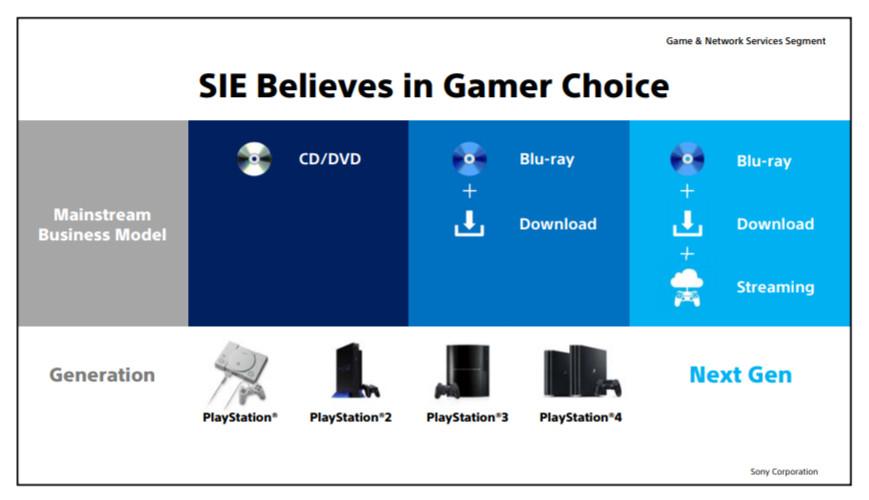 PlayStation Now has been criticized for a lack of content, especially compared to offerings like the Xbox Game Pass, but it’s clear that Sony sees it playing a big role in the next generation console space. Sony’s vision is that PlayStation Now will rapidly expand beyond its capacity to support 5 million subscribers, and the company is partnering with Microsoft to help achieve scale.

While cloud gaming is a focus, Sony says it still believes in gamer choice for its next-generation console. During one particular slide, Sony even hints that the PS5 could come with a Blu-ray drive and support downloads and streaming. Sony has only officially said that the next console will support discs so far.

Australia plans to strengthen its power grid with another giant battery