The National Museum of the US Air Force in Dayton, Ohio, is honoring the exploits and sacrifices of the Greatest Generation in a new augmented reality exhibit “D-Day: Freedom from Above.” This AR experience commemorates the 75th anniversary of the Normandy landings, which helped liberate France and Western Europe from the Nazis and lead to the Allied victory in the Second World War.

The 3,500 square foot exhibit premiered on May 13 and will run through the end of 2019. It focuses on the D-Day missions of the 82nd and 101st Airborne divisions landings in Normandy, and the air assault on Sainte-Mère-Église, the first French town to be liberated by Allies. 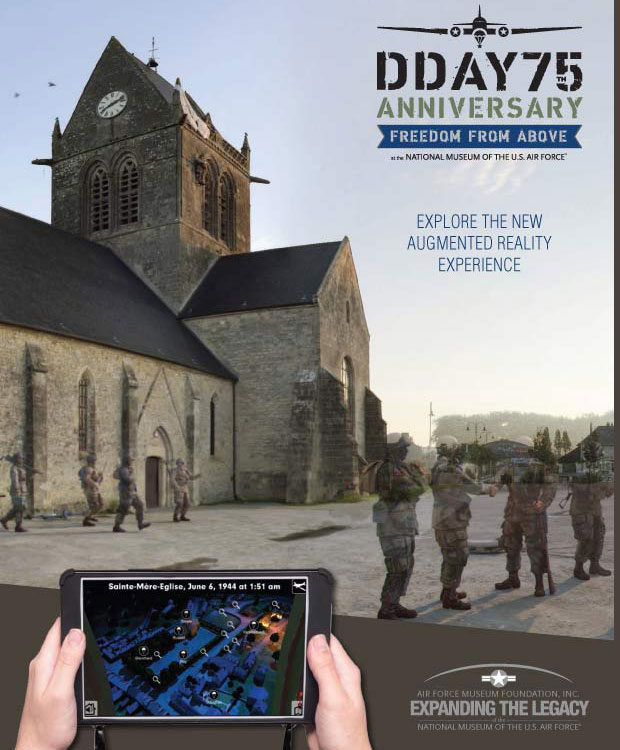 The D-Day Freedom From Above exhibit will run through the end of 2019.

The limited-run AR experience took France-based Histovery nine months to develop. The Dayton exhibit may be temporary, but a similar exhibit already has become a fixture at the Airborne Museum in Sainte-Mère-Église, where it provides context for the paratrooper operations and virtually “transports” the user to nearby locations as they were 75 years ago.

“This became a new goal thanks to the partnership initiated by the Air Force Museum Foundation for the National Museum of the United States Air Force,” said Bruno de Sa Moreira, CEO of Histovery.

“This innovative concept came out also because of the 75th anniversary, and became a reality thanks to our American partners,” de Sa Moreira told TechNewsWorld.

It is the latest exhibit that the AR technology firm has created for several museums in France. Other exhibits currently are on display at the Pope’s Palace in Avignon, the Royal Palace of Amboise, the Dungeon of Loches, and the Residence of William the Conqueror.

By using a HistoPad — a Samsung tablet device running Histovery’s proprietary software — visitors can get a digital experience that complements the artifacts in the various museums. 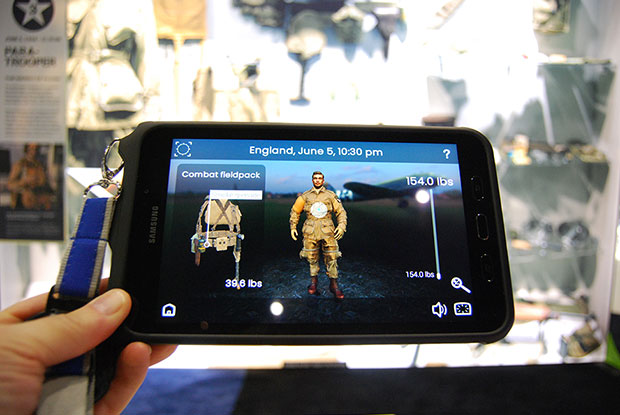 The HistoPad creates an immersing experience and allows visitors to interact with AR objects.

Since not everyone can travel to France, the decision was made to bring “D-Day: Freedom from Above” to the United States for the 75th anniversary of D-Day.

“This is the first time that a Histovery experience has been provided outside of France,” said Marie Angoulvant, lead graphic artist at Histovery.

“This experience plays off the National Museum of the US Air Force’s collection,” she told TechNewsWorld.

The National Museum of the US Air Force is openly daily to the public free of charge. There is a US$5 charge for the “D-Day: Freedom from Above” exhibit.

The National Museum of the US Air Force is the largest and oldest military aviation museum in the world. It also was the first museum devoted to one of the United States military’s service branches — actually predating the foundation of the USAF. It is home to more than 300 aircraft, including the B-17 Memphis Belle and the B-29 bomber Bockscar, which dropped the atomic bomb on Nagasaki and helped end World War II.

A section in the museum’s World War II gallery devoted to the D-Day landing includes various equipment and uniforms, as well as an actual Douglas C-47 Skytrain transport aircraft, which was used to deliver paratroopers to France and to tow gliders. 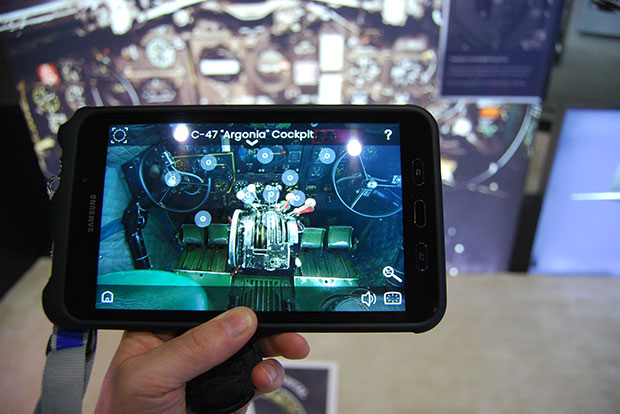 AR can allow visitors to see parts of the National Museum of the United States Air Force’s collection in ways not normally possible. In this case they can see a 360-degree view of the cockpit of a C-47 transport plane.

“D-Day: Freedom from Above” builds on those exhibits, creating a less static presentation. Via the HistoPad users can experience a pre-mission briefing, see the equipment carried by each paratrooper, take part in a flight on a C-47 transport aircraft, and jump into action in Nazi-occupied France. 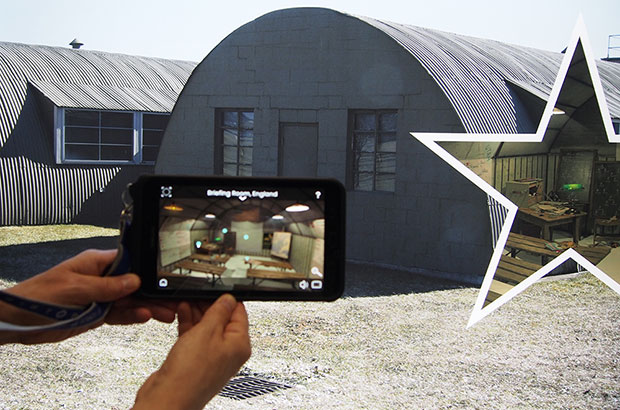 From the HistoPad visitors are taken back to England to prepare for the invasion of Normandy on June 6, 1944.

The exhibit features 12 physical panels that guide users through the experience, allowing them to manipulate various 3D virtual relics, view unpublished photographs, interact with animated maps, and get a hands-on perspective of the history.

“The average user spends about 45 minutes going through the presentation,” noted Angoulvant.

Since opening last month, the exhibit already has become a popular attraction for visitors to the museum.

“We believe it is a new way to way to connect with the younger generation that only knows about D-Day from movies, TV and games, and they are the ones that have tended to stay the longest,” said Angoulvant.

However, it isn’t just kids who are finding the HistoPad tablet to be an enticing way to take in history.

“We have found that veterans have been touched by it,” Angoulvant added.

“D-Day: Freedom from Above” isn’t the first AR experience built around “Operation Overlord,” the codename for the Battle of Normandy.

France-based 44 Screens in 2013 released “Arromanches 44,” an application designed to commemorate the 70th anniversary of the Normandy landings. It includes a reconstruction of the Port of Arromanches as it looked back in 1944 (pictured above) complete with an animated panoramic view of the harbor, and it offers an AR view of the Canadian landings at Juno Beach.

Spokane-based Gravity Jack, which creates AR and virtual reality presentation and tools, also developed its own app from the ground up to commemorate the Greatest Generation in the classroom. The “D-Day: June 6, 1944” app combines a multimedia experience with cinematic sound and animation, and works off a classroom map to walk users through the Normandy invasion.

It offers presentations on the landings, battles and equipment. Gravity Jack teamed up with The Greatest Generation Foundation and traveled to Normandy to record video, gather historical information, and even get firsthand accounts from veterans. All of this data is combined in a free app that runs on iOS and Android devices.

Creating the “D-Day: June 6, 1944” app took Gravity Jack about 12 weeks, but what was more difficult “was convincing “old school thinkers” to “think outside the box,” said Jennifer Richey, cofounder of Gravity Jack.

“One of the problems thus far with new technology is that companies — and museums which still run like companies — are reluctant to spend money on things they don’t know,” she told TechNewsWorld.

Gravity Jack proved AR could bring history to life in a new way when the company worked with The Tank Museum in Bovington, England, and Wargaming, the game development studio behind “World of Tanks.” That technology utilized Microsoft HoloLens and Google’s Tango app to create a 3D replica of the infamous Sturmtiger tank that could roll through the wall and park itself beside actual physical tanks in the museum.

It isn’t just D-Day or even World War II in general that has been getting the AR treatment. In addition to the AR experiences installed in several museums throughout France, Histovery has developed exhibits for other institutions. The National Museum of Singapore and the Smithsonian National Museum of Natural History in Washington also have embraced this technology.

At the Kennedy Space Center in Florida, as part of the “Heroes and Legends” exhibit, AR can be used to insert a hologram of astronaut Gene Cernan over his actual Gemini 9 space capsule and digitally create the historic spacewalk, the second in human history. Cernan’s spacesuit overheated and his visor fogged up, and the AR app allows visitors to experience this “spacewalk from hell.”

For those who want less drama but still desire an immersing experience, a new app dubbed “England’s Historic Cities” was released last year. It utilizes AR as a way for tourists to interact with heritage sites across the country. The app works with dozens of different locations, from Hadrian’s Wall and Durham Cathedral in the north of the country to Salisbury Cathedral in the south.

There is the question of whether this technology might take away from the actual artifacts in a museum.

“That may be an issue with some visitors, but museums aren’t the only places being challenged by technological distractions,” said Charles King, principal analyst at Pund-IT.

“Hopefully, AR and other new features will help inspire people to put down their phones and be entertained, educated and inspired by museum exhibitions,” he told TechNewsWorld.

New Way to Present the Past

AR technology is just the latest way to make the past come alive. It is especially appealing to younger museum visitors, who have grown up with smartphones and other devices. AR tablets and apps can help connect them with the past.

“We see AR as a new way to learn and digest information,” said Gravity Jack’s Ritchey.

“You can take a class on history and take notes, and you can listen to recordings and watch video, but this medium takes it a step further,” she added.

“With our ‘D-Day: June 6, 1944’ app you can hold up your phone, see the ships and paratroopers — as well as the bombs drop — and this lesson is many times more engaging than just reading about D-Day,” suggested Ritchey.

AR and related technologies could be the logical next step for all types of museums to engage with visitors.

“Museums have long been places for research and education, but over the past couple of decades, educational activities have incorporated increasingly sophisticated features,” observed King.

“Those include audio/video presentations, on-site performances by actors, recorded narrations, and smartphone apps for ‘self-guided’ tours and interactive exhibits and features. These are especially popular at science and technology museums,” he said.

“Some might see this as mere entertainment, but I believe it has more to do with engaging modern audiences on terms they understand and enjoy,” added King.

Museums could be just scratching the surface of what eventually will become commonplace, largely because the technologies involved are still emerging.

“Other museums are using AR to allow visitors to delve more deeply into specific subjects, like the San Francisco MOMA’s AR gallery of the works of painter Rene Magritte,” he continued. “Since most museums exhibit only a tiny fraction of their holdings at any given time, they have a lot of material and information to work with.”

Fallout 76 is Bringing Back the Brotherhood of Steel, Game is Free to Play This Weekend

The Trials and Tribulations of Paying Ransomware Hackers

PS5 and Xbox Series X/S to Have Netflix, Disney+, and Other Major Streaming Apps at Launch

Microsoft Ignite and Dominating the Future of Tech the Right Way