This is Cowboy, the best looking pedal-assisted electric bike with a removable battery that I’ve ever seen. And that’s not just my opinion, either.

While shooting the photograph above, several Amsterdamers stopped to ask me about the bike. That’s remarkable for a bicycle culture as diverse and sophisticated as Holland’s. A passing VanMoof S2 owner even stopped after taking notice. “Wanna trade?” he asked with a sly smile. That’s high praise from someone who rides what might be the most attractive electrified urban commuter in the world.

Oh, this Cowboy sill has its faults, which I’ll get to in a moment. But the 2019 prototype with GPS anti-theft tech that I’ve been testing is a very good e-bike that does what VanMoofs and Amplers can’t: lets you leave your heavy bike outside while you take the battery inside to charge. And it does it for about €1,000 less.

The bike does have a battery bulge along the backside of the seat tube. But its placement is less offensive than a slab on the rear carrier or a big ol’ Bosch tumor bolted onto the down tube. It’s a trick that lets this e-bike approach the clean lines of those with integrated batteries.

Most likely, you’ve never heard of Cowboy, the €1,990 e-bike, or Cowboy the company. No surprise, as the Belgian startup that currently employs 40 full-timers has only been selling its e-bike in Belgium for the last year. That’s changing now that the company has raised €10 million in funding to leave home. Starting on Monday, the 2019 Cowboy will enter mass production in Poland and begin shipping to Belgium, The Netherlands, Germany, and France in July, with more countries to come.

The Cowboy I’ve been testing is a late-model prototype, probably 95 percent complete, so don’t confuse these words with a review. Instead, let me help you decide whether an e-bike from a brand you’ve never heard of is worthy of your interest, and maybe even your hard-earned cash.

First let’s address the elephant in the room: mud guards. The Cowboy doesn’t have any, and the company doesn’t even offer them as accessories. Urban commuters, especially, need fenders when it rains to avoid road splatter on their way to the office. This bike also lacks a kickstand option when ordering, another commuter no-no. Sure, it can be fitted with off-the-shelf components, and Cowboy will happily recommend accessories that fit. But that’s not the expectation you have when dropping €2k on a bike, is it? Fortunately, these unfortunate oversights will soon be corrected.

Cowboy’s first accessories, mudguards, are coming after the summer, which is also after the delivery of its first 2019 e-bikes. “When we do start selling mudguards I want us to be proud of them, and not just be a piece of metal or plastic that completely ruins the design of your bike,” said Cowboy co-founder Adrien Roose when I sat down with him last week. “We’re taking another approach. More on that soon.” If you do buy a bike now you can order the mudguards later, of course. Other Cowboy-made accessories are coming as well.

A major criticism of the 2018 Cowboy was its dependency on your phone: the e-bike can only be turned on with the Cowboy app. That sucks, frankly, because fishing your phone out of a pocket or purse just to ride your bike is a pain in the ass, in my experience. But I’m climbing on my bike multiple times a day — more casual riders might not be as annoyed. Fortunately, Cowboy says it will have a workaround for this too, though not on day one.

The torque sensor is perfectly tuned for aggressive riding

2019 Cowboy e-bikes will eventually have the option to turn on their bikes without the app, by inserting the removable battery into the bike. How this will work exactly isn’t yet decided, but it’s likely that the owner would have to insert the key that locks the battery into place, eject the battery slightly (no need to fully remove it), and then snap it back into place. It’s fussy, compared to a button, but not as fussy as fishing out your phone, unlocking it, launching the Cowboy app, then pressing the unlock button, and storing your phone again. Roose tells me that they didn’t want to add a physical button to the bike because then anybody could turn it on. They wanted to ensure it was tied to the owner either through a physical key or the app.

Fair, but I’ve ridden plenty of pedal-assisted e-bikes with physical power buttons and it’s never been an issue. Especially when they’re securely locked and set to turn off automatically after a pre-determined time of inactivity (Cowboy’s bikes already feature an auto-off timer but I wasn’t able to test that on my prototype bike.) Otherwise, they could always adopt VanMoof’s ingenious button that requires the owner to tap out a secret code to turn on the bike.

Riding the Cowboy is very similar to riding an Ampler Curt. Both bikes put the rider in the same sporty position. Both bikes offer a single belt-driven gear and near silent 250W rear-hub motor. Both are lightweight for e-bikes, though the Cowboy is a bit heavier at 16.1kg or a bit less than 36 pounds. The Cowboy, however, provides noticeably more power from a standstill, helping you get started easier when under load or on an incline.

In fact, I find the torque sensor on the Cowboy to be perfectly tuned to my aggressive riding style. Push lightly on the pedal and the motor provides a light touch without feeling underpowered. Push harder and the bike responds with confidence. The pedal assist never felt too jerky or too weak, even on my prototype test bike. 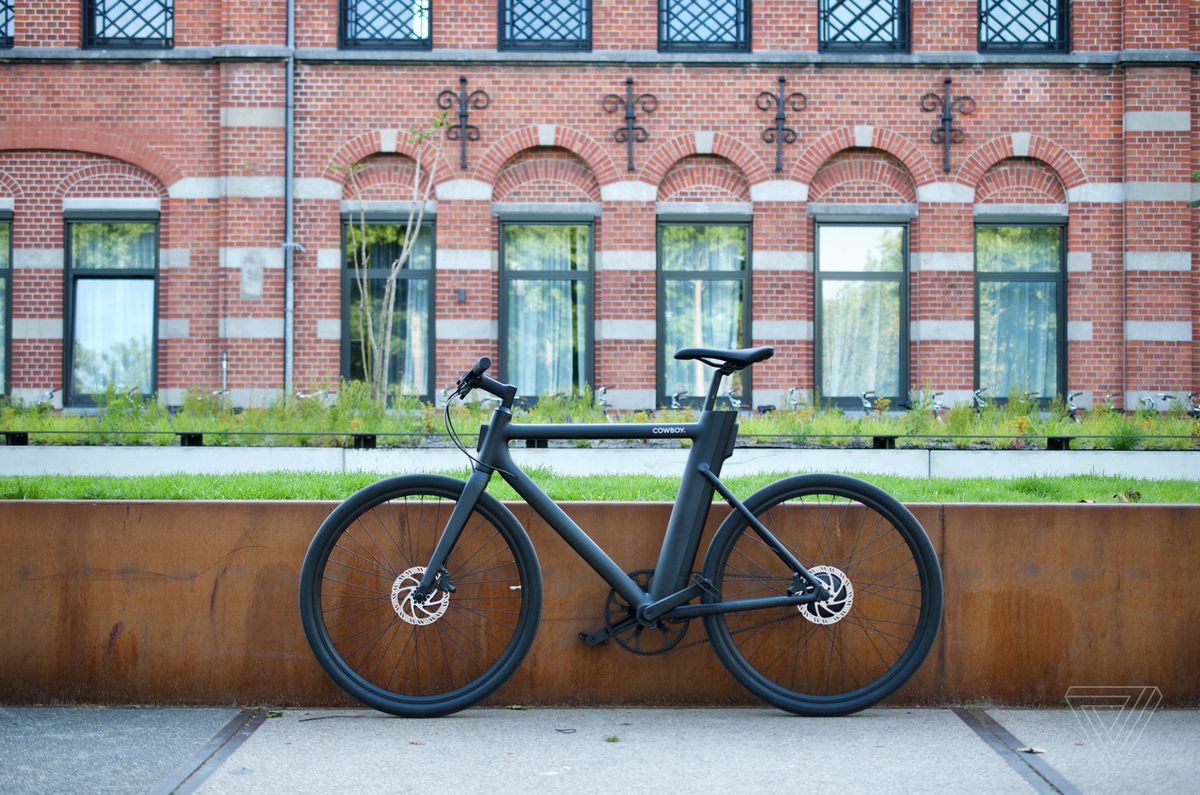 I couldn’t test everything though, since my bike was a near-final engineering prototype. For example, the rear light, that’s supposed to intensify when braking wasn’t enabled on my bike.

Here’s my takeaway after meeting with Roose and living with his company’s 2019 prototype for a week and change: Cowboy is a name to watch in the booming e-bike industry.

I’m a fan of Cowboy’s business model which favors slow growth over a global launch. While it’s tempting to make a short-term grab for riches by opening up to worldwide sales, the young company has chosen to expand slowly in order to maintain control over the quality of its bike and the after-sales experience. “Our Success depends half on the product and half on the service,” said Roose. That’s no guarantee that this second-generation bike won’t suffer issues. But if you buy one, you can take comfort in knowing that a support network will be in place to help make things right.

If you’re in Europe with €1,990 to spend on an alluringly sporty e-bike with a removable battery then Cowboy should be on your short list. Just make sure you’ve got a little cash on reserve for accessories.

Photography by Thomas Ricker / The Verge

Samsung leaks new notched tablet on its own website

Can I Downgrade watchOS 7 Final Back to watchOS 6 on Apple Watch?

How to Fix Your Phone or Tablet’s Broken Screen