Amazon plans to begin drone deliveries within the next several months. The drones have become far more capable, safer, and less noisy, but there are five other problems that will need to be addressed before this delivery method reaches its full potential.

Now, don’t get me wrong. I’m looking forward to drone delivery, which might be ideal for Uber eats if it wasn’t for the problem of cold air blowing on the food the entire transit time. Still, there are several things that will need to be addressed before most of us will have drones dropping off our packages.

I’ll explain and then close with my product of the week, a book this time. It’s one that every person interested in the history of Silicon Valley should read: 3Com. This is the story of the first Silicon Valley dragon and how it died.

We currently have a huge problem with theft when people deliver our products. Crooks typically watch for the delivery guy to drop off the package, wait a few minutes, then help themselves to the package left on your porch.

With drones you’ll be able to see where they are going from some distance. They’ll need to drop on an open area like a driveway where the package will be visible from the street (if there isn’t a back yard) and they’ll need to avoid lawns due to sprinklers. For places where there are lots of trees, for apartment buildings, or in dense city neighborhoods, there just may not be a safe place (other than a roof) to place the package.

Eventually homes and buildings will be designed with this in mind (you might even be able to use the unused helipads on the top of some buildings). I can even imagine large windows that would open and allow the drone to drop the package inside (of course if the window doesn’t open there will undoubtedly be a really expensive event).

Until we figure out where these drones can drop packages safely, a huge number of locations just won’t be secure enough or accessible enough for drone deliveries.

Delivery vehicle drivers must work in most kinds of weather. However, when it is really hot the air density drops, reducing dramatically the lifting capacity of aircraft (including drones). When it is really cold, energy capacity for electric vehicles drops like a rock.

In addition, drones will be dangerous in the snow, fog and rain (particularly with lightning), so those conditions generally will be no-fly weather. High and gusting winds also are problematic. Weather patterns suggest there will be a lot of areas and times during the year when drone delivery just won’t be practical.

Delivery drones will need to handle a wide spectrum of weather conditions — otherwise you won’t be able to depend on them. If you can’t depend on them, you can’t get rid of your human delivery drivers who can deal with the weather.

People already are shooting down drones. There are a lot of people with too much time on their hands who think up of new and creative ways to do damage.

Whether we are talking about people shooting these things down, sending up other drones to mess with them, or just trying to hit them with stuff they can throw, keeping drones from being destroyed will be problematic.

Aside from mischief, this would be one way to gain ownership of the drone’s payload (I’m actually anticipating drone pirates at some point). The firms using drones will need a better way to determine if the drone is at risk and to bring anyone who purposely damages one to justice.

These things aren’t cheap, and losing a significant number over a short period could drive a delivery company under. Protecting them against abuse needs some additional thought.

Batteries remain the weakest link on any electric solution (most of the proposed new drones are electric). The weight and size, or aerodynamics, of the product being delivered will have a huge adverse impact on the drone’s range, making it critical to consider these issues before the drone wanders off on its way.

Range changes a lot with heat, cold and various weather events. A headwind, for example, will cut into a drone’s range dramatically, not to mention wind that exceeds the drone’s top airspeed.

In fact, it may be necessary to change packaging a lot, to make it more water resistant, more aerodynamic, and easier for a drone to carry.

The visual sensors being used in autonomous vehicles have improved a lot, but they still aren’t very good in all kinds of weather or with small objects. Even people have issues with seeing powerlines in low light or when the sun is in their eyes.

Power lines are above ground in many areas and historically have been a huge problem for helicopters, but even some planes have hit them. Planes are at risk only for the huge power distribution lines, but drones will have to deal with the far harder to see municipal power lines.

Granted, as long as they keep to vertical takeoff and landing and move horizontally only when they are up 100 feet or more, this problem largely could be eliminated, but they also are going to have to fly around trees, between buildings, and during various wind events, all of which could bring them into contact with power lines. It won’t be enough to dodge the big ones, as a lot of homes have power lines running from them to power poles.

Note that I haven’t mentioned problems such as these things falling from the sky or terrorists bombing people with drone-delivered packages, which I expect to happen once we have thousands of these things buzzing around.

I also haven’t addressed traffic management, which will be a huge problem at scale. However, these issues won’t materialize until the industry can wrap its arms around the first set, because if there are long periods of time when the drones can’t fly, they can’t be relied upon. Firms will need their traditional human-based distribution systems to stay intact.

It is summertime, when a lot of us go places where we want to kick back, quietly read, and maybe learn something new. I highly recommend a new book coauthored by an old friend of mine, Jeff Chase. It is about 3Com, the first dragon in Silicon Valley. 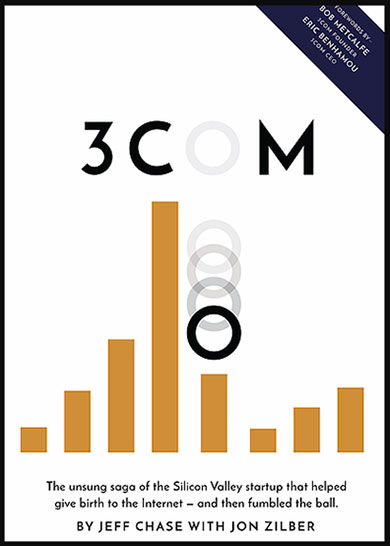 You’ve likely heard of unicorns, but dragons are even more rare. These are firms that are so successful they effectively replace the entire investment fund that was used to create them.

3Com preceded Cisco and should have become that company but through a series of missteps, a truly horrid merger process, and a series of strategic and tactical mistakes, the dragon 3Com was killed.

The authors — Chase and Jon Zilber — do a good job of pointing out what 3Com did right and wrong, and in contrasting Cisco’s rise with 3Com’s fall. What is particularly interesting — or troubling, depending on your frame of reference — is that 3Com used an acquisition process that is common in the industry, and that is partially what killed it.

Other mistakes were trying to chase Cisco and not staying focused on the market it knew. This tale of corporate failure could well be in most any firm’s future — I’m thinking Apple at the moment. It’s like that old saying, “Those who fail to learn from history are condemned to repeat it.”

Reading this book is a great way to learn how not to make a number of very common mistakes and avoid 3Com’s fate.

Helping companies avoid mistakes is a lot of what I do these days, and this book has become a critical part of my library. I recommend it for your summer reading, so the book 3Com is my product of the week.

3D Printing and the Rise of Bespoke Products at Scale