The electric motor scooters came at dawn. Slowly, at first, but then truckful after truckful. They were parked on the streets of densely populated (and mostly affluent) neighborhoods across Brooklyn and Queens like Williamsburg, Park Slope, Long Island City, and Astoria.

New Yorkers are used to rapid change, but the black-and-bright-blue Vespa-style scooters from a startup called Revel kept coming, at a clip of more than 100 per day, until 1,000 were parked on city streets within just one week.

“People were just going everywhere with it.”

The scooters are a remarkable change in the landscape of the city’s two most populous boroughs. And despite being the first such service in the city, Revel appears to have found a foothold in the day-to-day lives of people who live here. While Revel won’t say exactly how many rides people have taken, the company’s two co-founders tell The Verge they were seeing four to five rides per day on each electric motor scooter just three days into the rollout, all with no paid advertising.

“It was kind of cool, Saturday and Sunday, looking at our back-end operations map, seeing like one hundred and fifty rentals moving at once,” Frank Reig, CEO and co-founder, tells me. “People were just going everywhere with it. It’s exciting.” 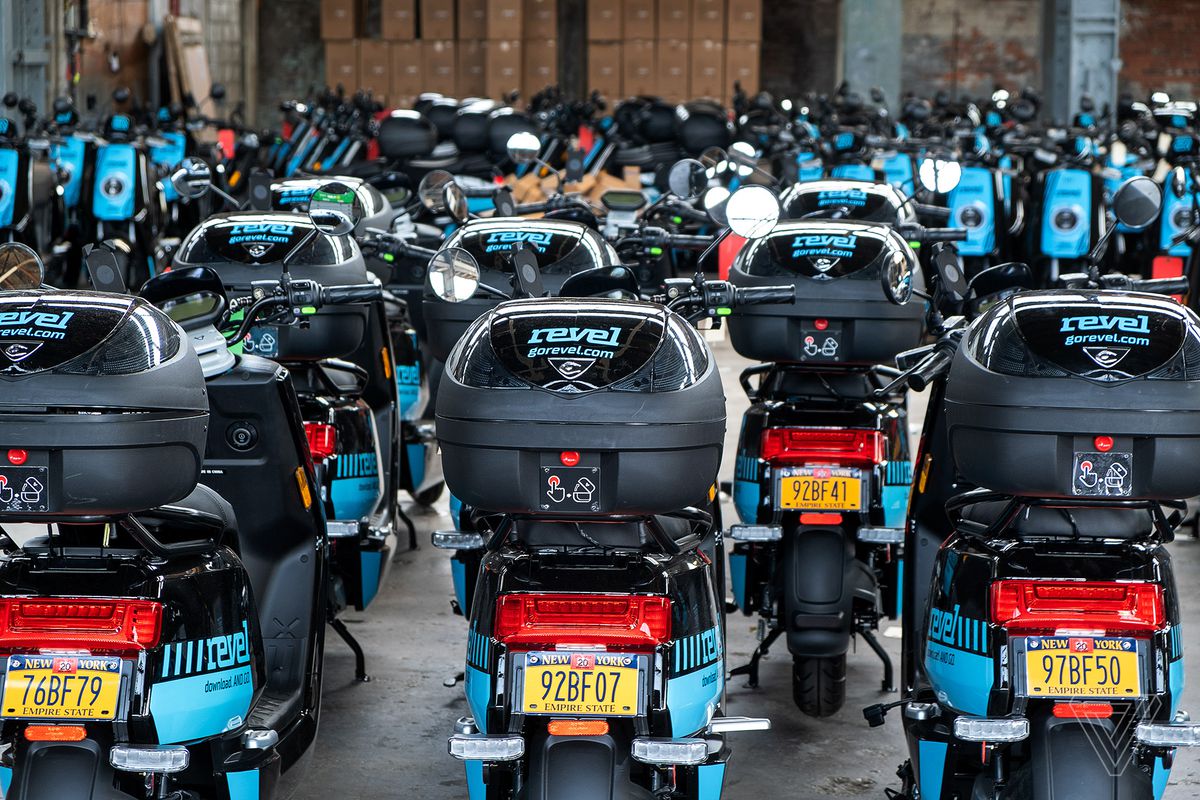 Revel staged its blitzkrieg in the cavernous, rusting Building 269 at the Brooklyn Navy Yard. Originally a place where boats were built, the building has lived many different lives. It’s currently owned by Agger Fish Corp., which let it be transformed into the media center for a Hillary Clinton–Bernie Sanders primary debate in 2016. The fishing company also keeps one corner of the building dedicated to barrel-aging beer for Brooklyn Brewery.

When I visited Revel halfway through its rollout, some 350 of its electric scooters were laid out in rows that took up most of Building 269’s floor space. They were still getting the final touches before being sent out onto the streets. Workers tightened handlebars, tested horns and other alert sounds, and checked headlights.

When they broke for lunch (pizza, of course, since it’s Brooklyn), Reig and his fellow co-founder and COO Paul Suhey sat down to talk about how the rollout was going, and lay out their plans for the service.

Revel’s two-wheelers are technically mopeds, though they don’t have pedals, and are speed-limited to 30 miles per hour. This classification allows them to live in a sort of middle ground between bikes and motorcycles, according to Reig and Suhey. You don’t need to have a motorcycle license to sign up for Revel, but you do need a drivers’ license, and they can’t legally be driven in bike lanes.

But Revel’s mopeds most closely resemble Vespa-style scooters, both in style and in how they ride, and in the week-plus since the service launched far and wide, most everyone I’ve spoken to refers to them as scooters. It’s what I’ve stuck with, too, even though it has confused people into thinking that I was talking about the kick scooters from services like Bird or Lime. 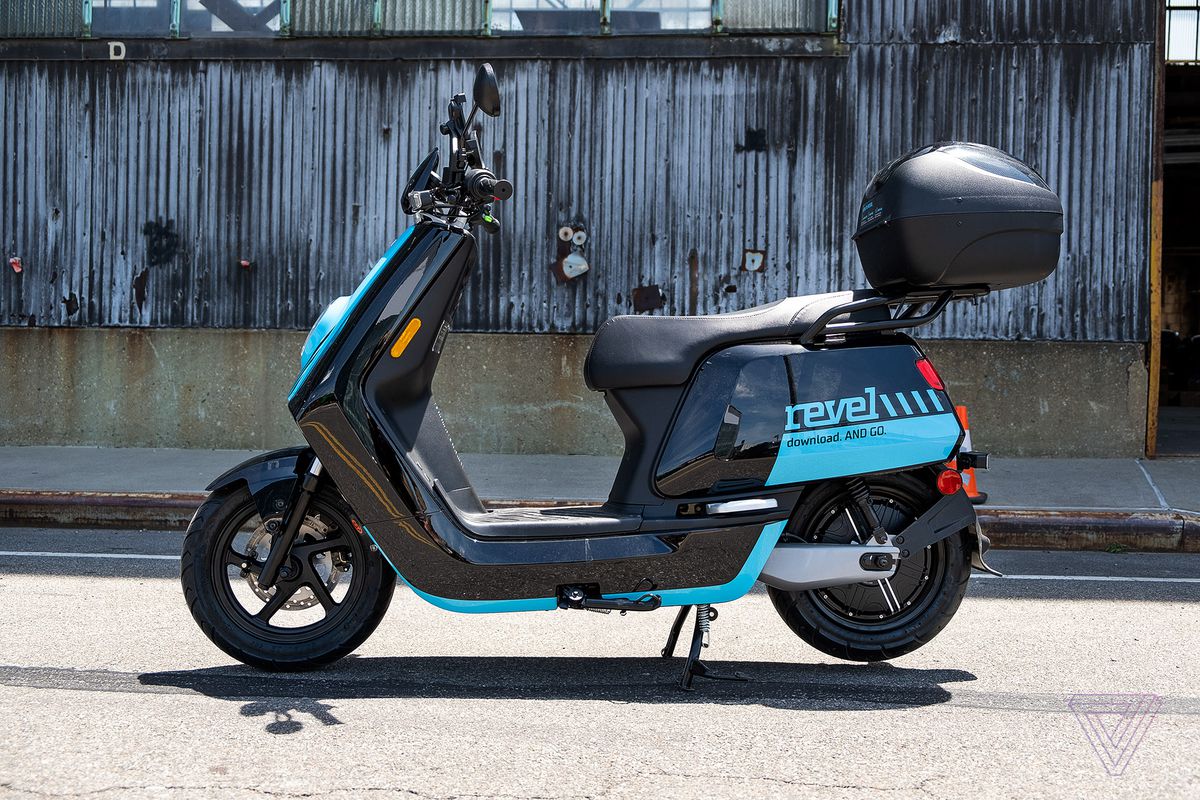 Revel works similarly to those shared scooter services (as well as other Vespa-style shared services like Scoot in San Francisco, or Coup in Paris). It costs $19 to sign up. Once you’re in, you can find the scooters on a map in the Revel app. Tap a scooter on the map to reserve it (up to 15 minutes ahead of time) or book it right away. Each ride costs $1 to start ($2 if you have someone tagging along with you), and then $0.25 per minute. If you want to stop but don’t want to give up the scooter just yet, you can “pause” the ride in the app, and the rate goes down to $0.10 per minute.

At the end of your ride, you park the scooter on the street, and Revel offers tips in the app on the best places to slot them in — like, say, at the end of a block. You can also see how many miles’ worth of battery is left on any given scooter. The lowest I spotted was nine miles, just near the threshold where a Revel employee will come and swap out the scooter’s two batteries for fresh ones.

There are some key differences to how this service compares to the Birds of the world, though. Revel’s customer service team checks every new applicant’s drivers’ license against a DMV database to see if it’s current, and to make sure that the person doesn’t have a horrid driving history. This license-based system also helps with accountability, Suhey explains. If someone parks a scooter in a bad spot, like on the sidewalk, or in a restricted parking area, that customer is on the hook for any tickets or fines for the next 24 hours (unless of course the scooter gets taken by someone else). 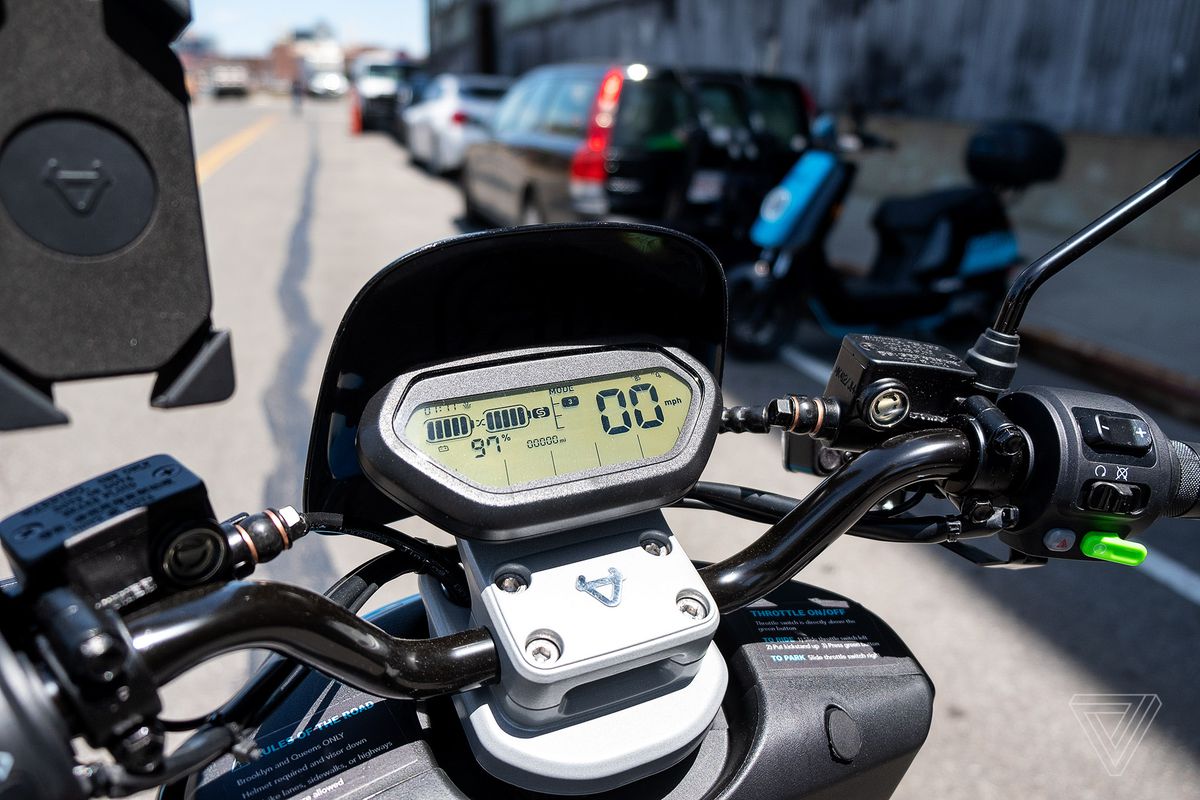 Each motor scooter also comes with two helmets, one big and one small, which are locked away in a cargo compartment at the back. Those helmets are cleaned “every two to three days,” Suhey says.

He also points out that it’s not just about keeping the helmets clean. The field technicians also check the overall state of each scooter on the same schedule, measuring tire pressure and making sure nothing else is amiss. “It’s just a general safety inspection,” Suhey says. “It’s important to us that, not only do you have a consistent quality experience with the cleanliness of the moped, it’s also safe every single time you get on it.”

Revel hopes to get years of life out of each scooter, and so it has a handful of full-time mechanics on staff to make more full repairs when necessary. In fact, Suhey says all of Revel’s 40 employees so far are full-time, with health insurance and benefits. That includes the half-dozen customer service employees, as well as about 16 corporate staff. 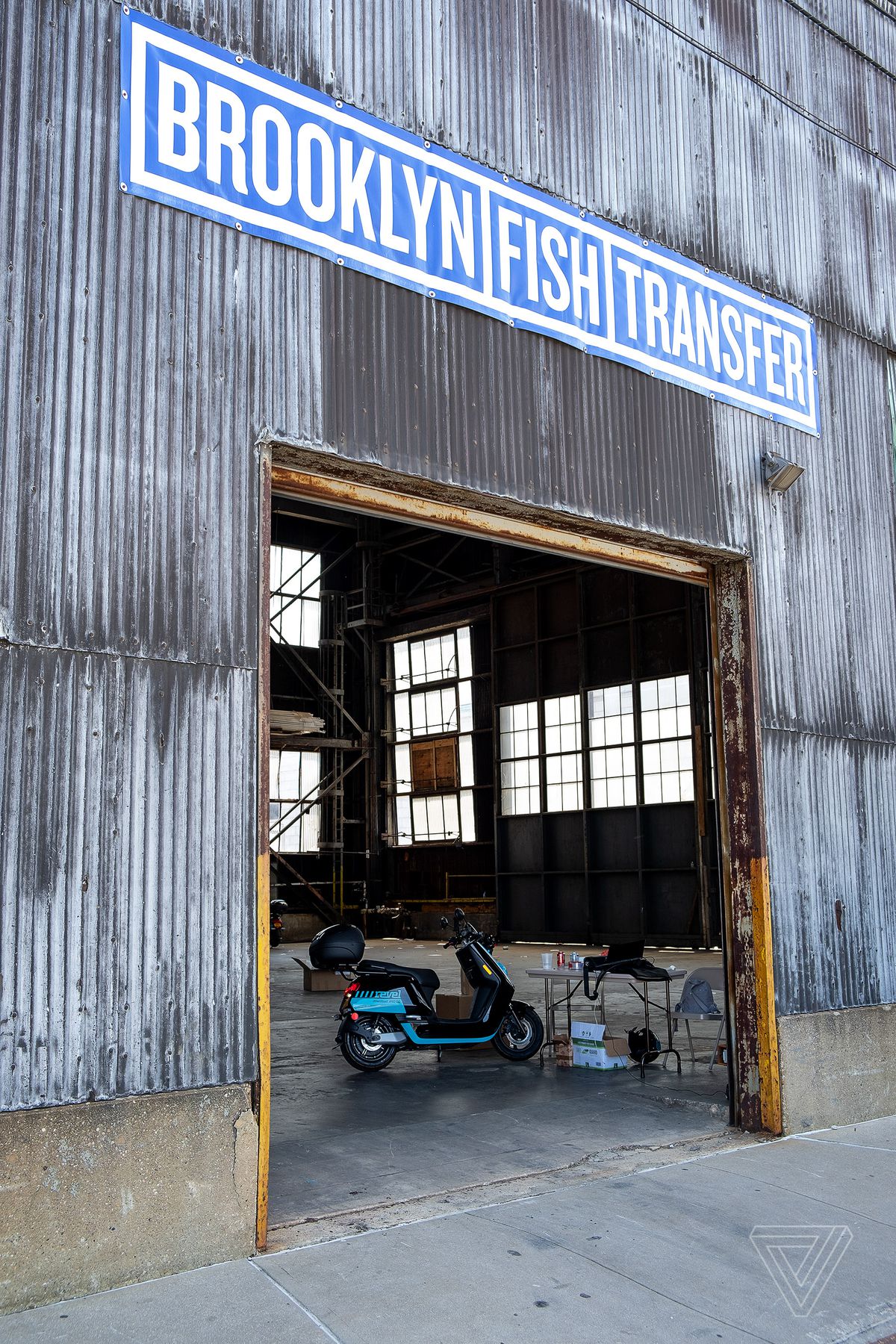 I mostly didn’t have any issues with cleanliness or the quality of the scooters during 10 separate rides across Revel’s first week. I rode scooters with zero miles, 60 miles, and 130 miles already on them, and the worst problems I saw were a slightly loose handlebar grip and a broken phone mount. That said, the service did suffer some downtime on Thursday thanks to some “connectivity” issues.

Some of those numbers are probably even inflated by my excitement to use the service, since two of my rides were nearly an hour long. Revel ran a pilot version of the service in New York City over the last 10 months with just 68 scooters, and Suhey says about 50 percent of those rides were less than 15 minutes, and over a third were less than 10 minutes.

“How much did we talk about pricing over the last six months?”

Point is, the cost of the service is going to land somewhere between a subway or bus ride ($2.75) and hailing an Uber or Lyft. That’s by design, Revel’s cofounders say.

“How much did we talk about pricing over the last six months?” Reig asks in response to my question. “Fourteen times a day,” Suhey answers.

“One of our main goals with the pricing model that we have is simplicity,” Suhey continues. “We want it to be easy to understand and easy to communicate. This is a new service. We have challenges in a lot of different elements of user education.” But since a lot of people in the pilot only wanted to use Revel as a last mile (or so) option, the co-founders landed on this pricing structure.

“I think we’re right in the area that we need to be: cheaper than an Uber Pool ride, but you’re getting there just as quickly as an Uber X ride,” Reig says.

That said, Suhey says Revel is considering other options, like a membership model, or the ability to buy “hours” at a time. The company already offers a 40 percent discount to people who are eligible for or actively participating in local, state and federally administered assistance programs. 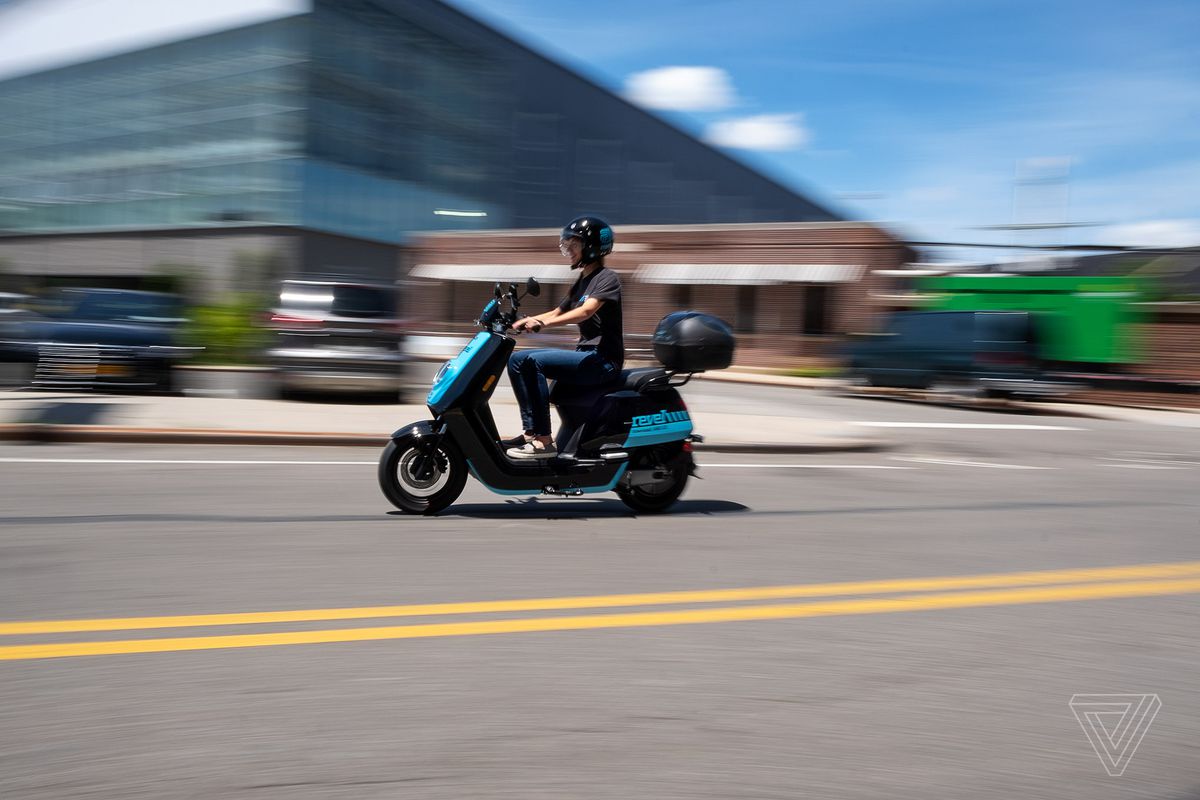 Moving through Brooklyn on a Revel scooter is fun, but it also feels freeing. It’s like biking without any of the work, with the added bonus of being able to get away from the cars around you. I liked it more than using an electric skateboard, or even an e-bike — especially because I could just walk away from it after every ride.

Most importantly, the scooters are quick enough to maneuver around and keep up with New York City traffic, though Revel warns users not to take them on bridges or highways.

Other people can’t hear you coming, which can be dangerous

The scooters don’t make any noise. In fact, they’re whisper quiet. On one hand that’s nice — they’re electric, after all, which is better for commuting than something spitting out greenhouse gases. And it does help you hear your surroundings better.

But other people can’t hear you coming, which can be dangerous. At least five times while riding a Revel scooter I’ve had pedestrians step out in front of me. I haven’t come close to clipping anyone, but I can see that the danger is there. New Yorkers love to jaywalk, crossing lights be damned, and so you have to hope they see you coming, and be ready for them as well.

There is a respectable horn, which helps. And one of the best features of the scooter is that it will beep when you activate the turn signal, which helps at intersections. (The signal also automatically deactivates after you turn, which — being a forgetful klutz — is one of my favorite things about the scooter.)

The US government is actually currently hammering out a law that will make it mandatory for electric and hybrid vehicles to emit a noise at low speeds so pedestrians know they’re coming, but it’s been delayed, which doesn’t help Revel riders now. When I ask Suhey about this, he says responds with a standard “safety is our number one priority” line. But, he added, if the company believes a noise emitter would make the Revel fleet safer, he’d “absolutely be open to it.”

Otherwise, it’s frankly stunning what Revel has done. It rolled 1,000 electric scooters out on the streets of two of New York City’s biggest boroughs — the same city that has otherwise almost completely resisted any service that isn’t Citi Bike. Walk around in the parts of Brooklyn and Queens where Revel’s scooters are allowed to go, and it will likely be a matter of minutes before someone whizzes by on one.

For now, Revel’s scooters are only in New York, kids, only in New York. There are bound to be issues as Revel’s scooters get manhandled by the concrete jungle. Reig and Suhey say they’d love to cover more of the boroughs they’re in, and expand to others. But right now? “We need to focus on making sure that people love us, making sure this is a value add to the community, and… that’s it. Dead stop. That’s all we need to do,” Reig says.

Photography by Sean O’Kane / The Verge