One night, game designer Mike Bithell and a friend went out to see a largely forgettable action movie, and afterwards the conversation shifted to what, exactly, made John Wick so engrossing. Bithell’s friend, Ben Andac, who previously worked as a producer at Sony, then asked Bithell an exciting question: what would he do with the John Wick license? After thinking about it, Bithell realized he’d want to create a strategy game as opposed to a first-person shooter, giving players a chance to occupy Wick’s fast-moving analytical brain.

“I thought we were just bullshitting about cinema” says Bithell, whose previous work includes the charming platformer Thomas Was Alone and the stealth strategy game Volume. What the designer didn’t know was that his friend was working with Lionsgate and game publisher Good Shepherd to find an indie developer that would be a good fit for the John Wick license. “They were looking for a collaboration with someone who wouldn’t just give them the easy option,” Bithell explains.

Fast forward to 2019, and Bithell and his team are working on exactly that game, now called John Wick Hex. As he had originally envisioned, it transforms the brutal, unrelenting action from the films into something more cerebral. Players control the suit-clad assassin as he makes his way through dark alleys and poorly-lit hotels, which are all filled with gun-toting enemies. It’s not a turn-based game, where you perform an action and then watch as the bad guy does the same. Instead, it’s a game based around time: you plan out your strategy in advance, and then watch as the action unfolds in real time.

I had a chance to play through a pair of missions last week at E3, and while it takes a few minutes to understand, from what I played John Wick Hex feels surprisingly true to the movies. At the top of the screen is a timeline, not unlike what you’d see in a video editing program, which shows you not only when your actions will occur, but the enemies’ as well. This lets you see immediately if you’ll have enough time to get a shot off, or if you’ll have to resort to a melee action, which is quicker. The game is filled with these micro-decisions, each of which can be incredibly important; even figuring out which way to roll after you punch a bad guy can determine if you survive the encounter.

Part of the reason that the game feels so authentic, according to Bithell, is that the developers had a lot of access to the John Wick movie team. That includes director Chad Stahelski, as well as the stunt co-ordinators. “A lot of the moves in the game come from being directly in a room with the stunt team,” he says. “You could make a game that was inspired by John Wick without the John Wick name, but having that access, that experience of working with people who actually know what they’re doing, that’s priceless.” In fact, the idea to add a fog of war — a common tool used in games to obscure enemies that aren’t in close range — came directly from Stahelski. Bithell says that it’s been a great help working closely with “people who have been thinking about a lot of the same problems for a long time.”

Of course, there are some significant differences between a time-based strategy game and an all-out action movie, so Hex has to do some things differently. For one thing, all of the missions take place in very small, tightly contained areas, and they’re all very linear. Bithell says that this is so that players can focus on deciding what to do as opposed to where to go. “One thing we found while going through the process is John Wick doesn’t make choices based on geography, he makes them based on interactions,” Bithell explains. “He’s not choosing ‘I want to go down this path.’” You also won’t be able to improvise with your environment in the way that Wick does in the films; don’t expect to pick up a book and use it as a murder weapon. According to Bithell, these kinds of interactions tend to be one-use-only “switches” in games, which he wanted to avoid. 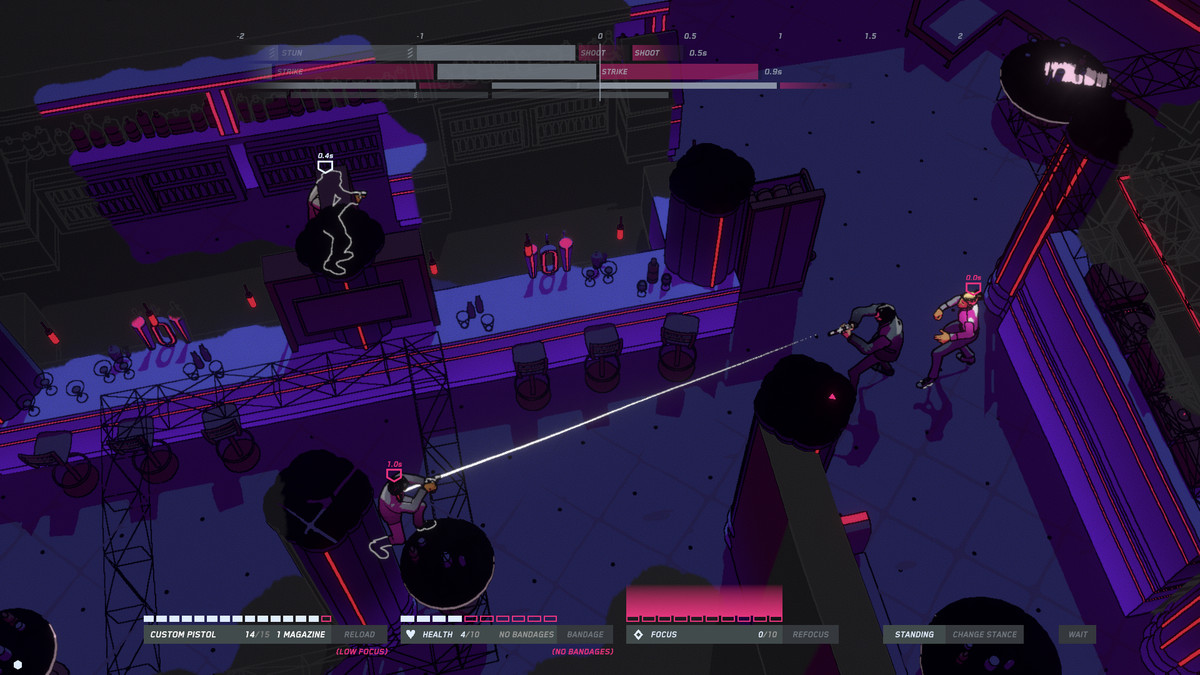 Bithell believes that there’s a level of logic and thought in John Wick’s action scenes that makes them an ideal fit for this kind of translation. In the movies you can follow the flow of a fight scene from beginning to end, and understand why each decision was made, whether it’s reloading a gun or ducking behind a wall. Even if it’s not always realistic, it tends to make a certain kind of sense. “That’s what makes it really great for an adaptation to games, because it’s built on systems,” Bithell explains.

The team isn’t talking much about story yet — Bithell wouldn’t even tell me if Keanu Reeves had played the game — but John Wick Hex will be a prequel, taking place before the movies and before John meets his wife. Fans of the Wick universe shouldn’t worry too much, though, as it sounds like the game will tread lightly when it comes to the films’ surprisingly deep lore and mythology. “I wanted to make something that was in that world,” says Bithell, “but provoked questions rather than answering them.”

John Wick Hex doesn’t have a release date yet, but it’ll be available on PC.

iPhone 12 Will Feature 64MP Sensor; iOS 14 Will Focus on Stability

I want to float in the void of this car’s paint...