A level of Perchang in motion looks like a Rube Goldberg machine. You might see little soccer balls flying around the screen being blown by giant turbines, or maybe they’re hit with paddles out of a pinball machine. Playing Perchang puts you in control of that Rube Goldberg machine. Though it feels a lot like a simplified version of the classic puzzle game Lemmings, and it’s just as difficult.

The conceit of both Perchang and Lemmings is that there’s a steady stream of something flowing into the puzzle space. In Perchang it’s soccer balls, while in Lemmings it’s… well lemmings. In both you are tasked with finding a way to safely guide a specific number of them to the level’s exit. In Lemmings, you are able to do this by giving some of the lemmings orders to build stairs, or dig, or keep the others from progressing past a point, which makes the solutions for any given stage open-ended.

Perchang simplifies this by giving you certain parts of the environment you can control. These parts are colored either red or blue to correspond to the two buttons you press to activate them, but you can change what color a part is on the fly while playing. This means that you don’t just have to get the soccer balls to the exit with the parts you have control over, but also figure out which parts need to be assigned to which button so that you can pull it off.

To use the level pictured below as an example, the spouts on either side release the balls one at a time, alternating back and forth between the two, while the balls need to travel up into the pipe at the top of the screen. When the level starts, the pinball flipper on the left is blue, while the one on the right is red along with the fan. By the default of the level, hitting the red button activates both the right paddle and the fan, but because the fan needs to be on constantly to solve the puzzle, it requires mapping both flippers to the same button. Otherwise, it becomes very difficult to get enough balls into the collector in the time limit. 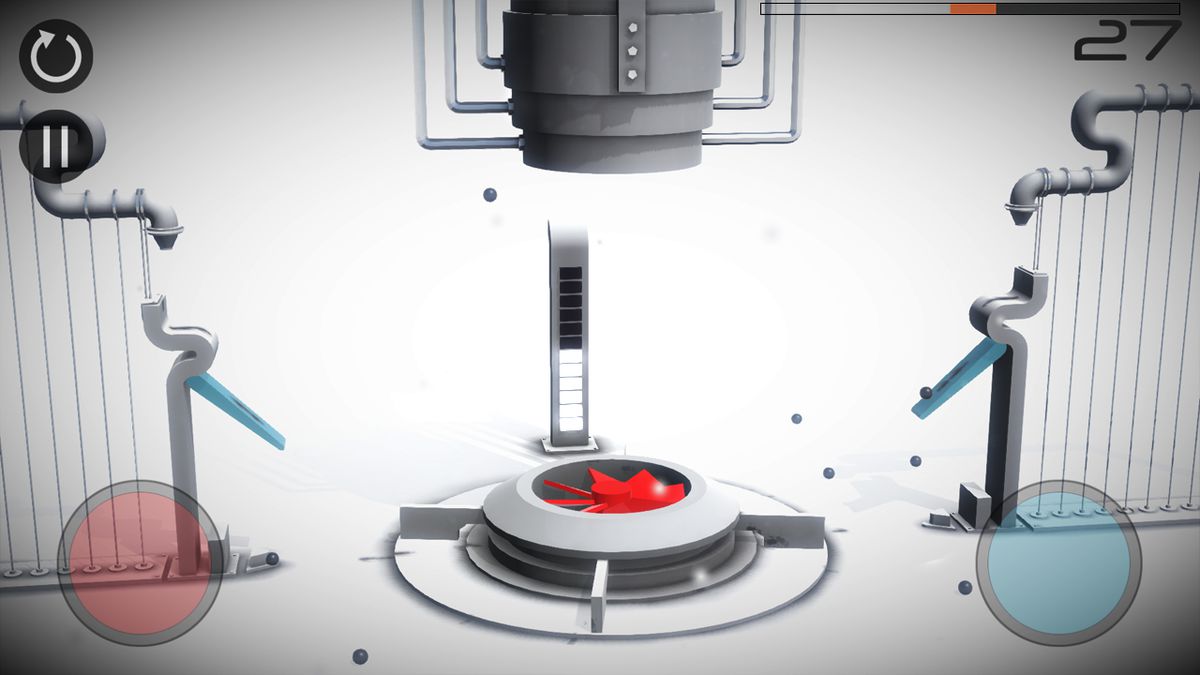 As the game progresses, more of these devices are introduced. It starts with simple platforms that rotate or move up and down, then expands to things like the previously mentioned fans, before getting to the much more complicated stuff like portals and rings that reverse the gravity of the balls that travel through them.

The more difficult levels not only incorporate these more complex devices, but often layer a number of them together such that there are five or six different devices that need to be controlled precisely in sync with each other in order for a ball to get to the exit. In these later puzzles, the game can start to feel a little fiddly, as you need to figure out which things should be mapped to what button, and the rhythm in which you should be activating things. Sometimes the difference between a ball correctly going through the level or not is touching a button for seemingly a fraction of a second too long or too short.

It’s not enough to keep me from recommending this game. You just need to have the right expectations for what the puzzles will demand of you. Perchang is a simpler Lemmings, but not an easier one.

Perchang was created by Perchang. You can get it on Nintendo Switch for $9.99, Apple iOS devices for $1.99, and on Android devices for free. It takes about three or more hours to finish.

Microsoft vets, Ciara, and Macklemore team up to own Seattle Sounders soccer club