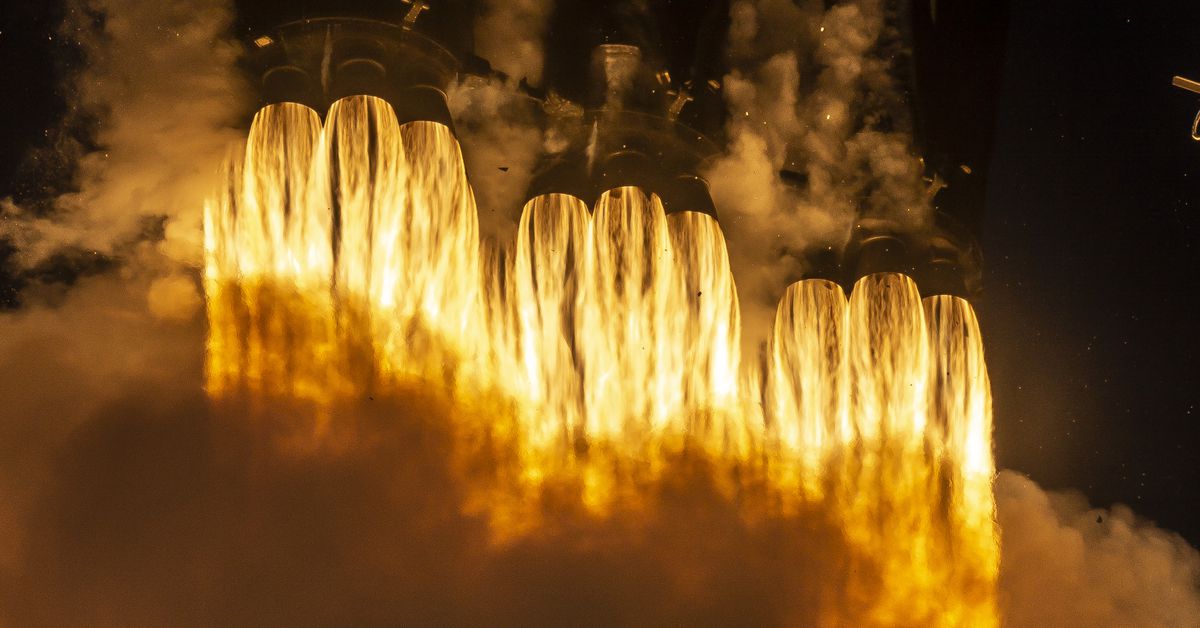 The third flight of SpaceX’s Falcon Heavy is set for this evening, and this launch is perhaps the most important one yet for the powerful rocket. The Falcon Heavy will be flying a mission for the Air Force known as STP-2 that’s ultimately meant to certify the vehicle as capable of launching future national security missions. If all goes well, the launch could help solidify the Falcon Heavy as a dependable rocket for the Department of Defense and potentially position SpaceX as a go-to launch provider for the military for most of the next decade.

To evaluate the prowess of the rocket, the Air Force has tasked the Falcon Heavy with launching 24 satellites into space at once. The various spacecraft — hailing from NASA, the Air Force, the National Oceanic and Atmospheric Administration, and universities — are each demonstrating some new technology or capability in space, including a novel type of atomic clock and alternatives for in-space propulsion. The 24 payloads are going to three different orbits, so the Falcon Heavy has to reignite its engine up to four times in space to get everything to its final destination. Altogether, it will take three and a half hours from launch until the last satellite is deployed.

SpaceX CEO Elon Musk has labeled this mission the “most difficult launch ever” because of its complexity. But it’s also challenging given what’s at stake for the company. SpaceX is one of four companies competing to be one of the US Air Force’s two primary launch providers for much of the 2020s. The two companies chosen by the Air Force will be the only ones eligible to receive contracts between 2020 to 2024 to launch DOD satellites, with flights lasting until 2027. If SpaceX makes the cut, it will be eligible for millions or perhaps billions of dollars in launch contracts from the Department of Defense. The Air Force has requested proposals for rockets to serve the agency’s launch needs, and SpaceX will likely compete the Falcon Heavy along with its Falcon 9.

That’s why SpaceX really needs this launch to go well. The other companies in the running include Blue Origin and Northrop Grumman, both of which are developing new rockets (the New Glenn and OmegA, respectively). The United Launch Alliance is also developing a new rocket, Vulcan, based on the capabilities of its current fleet of vehicles, which include the Atlas V and the Delta IV Heavy. All three of SpaceX’s competitors are receiving hundreds of millions of dollars from the US Air Force to further develop their rockets. SpaceX recently filed a lawsuit with the US government because it didn’t receive any development money — a move that Blue Origin and ULA are trying to block.

However, the Falcon Heavy is the only operational rocket that’s competing for these contracts, so SpaceX has a unique opportunity to show off the vehicle’s ability before everyone else. It’s also a big launch for SpaceX, as it’s the first time the Air Force will fly on a Falcon Heavy using previously flown boosters. The two outer cores of this Falcon Heavy were the outer boosters on the second Falcon Heavy that launched in April, which lofted the Arabsat-6A satellite for the Arab League. Both of the cores landed on SpaceX’s landing pads in Cape Canaveral, Florida, after that mission. Up until now, SpaceX has mostly flown used rockets for its own commercial missions as well as missions for NASA. Only one small Air Force satellite has flown on a used Falcon 9 rocket, and it piggybacked to space on another satellite.

Meanwhile, the core of the Falcon Heavy will attempt to land on one of SpaceX’s autonomous drone ships in the Atlantic Ocean after launch. SpaceX still has yet to recover the core of a Falcon Heavy intact after a mission. During the inaugural launch of the rocket, the core missed the drone ship it was targeting and slammed into the ocean after running out of fuel to properly reignite its engines. On the second Falcon Heavy launch in April, the center core landed successfully on a drone ship in the ocean, but the core accidentally fell over on the way back to shore due to choppy seas.

Takeoff for the STP-2 mission is slated for 11:30PM ET tonight from the Kennedy Space Center in Cape Canaveral, Florida. SpaceX has a hefty four-hour launch window, though, so the Falcon Heavy can launch up until 3:30AM ET tomorrow, June 25th. There’s a 70 percent chance that weather will be favorable for a launch, according to the Air Force’s 45th Space Wing, which monitors launches from the Florida coast. If SpaceX can’t launch tonight, it has a backup launch day tomorrow, also starting at 11:30PM ET.

There are a few options to watch this mission, as both SpaceX and NASA will be live-streaming the event. NASA will begin coverage around 11PM ET, just a few minutes after covering the return of three astronauts from the International Space Station. SpaceX will also be live-streaming, starting about 20 minutes before takeoff. Take your pick of which live stream is for you.