Yellow Submarine, a 1968 animated feature in which cartoon versions of The Beatles help the kindly citizens of Pepperland resist the authoritarian, fun-hating Blue Meanies. Based (very loosely) on a cheery, kid-friendly, sea shanty-like song that was originally released on the band’s 1966 album Revolver, the movie was the group’s third theatrical release, following the huge hits A Hard Day’s Night and Help! (The Beatles also starred in an hourlong 1967 TV special, Magical Mystery Tour.) Like those earlier films, Yellow Submarine is loaded with catchy music and absurdist humor, and it imagines band members John Lennon, Paul McCartney, George Harrison, and Ringo Starr as fictional characters on a mission to make a drab world more entertaining.

Because Yesterday opens in theaters this weekend.

Written by British romantic comedy specialist Richard Curtis (Four Weddings and a Funeral, Love Actually) and directed by eclectic filmmaker Danny Boyle (Trainspotting, Slumdog Millionaire), Yesterday stars Himesh Patel as Jack Malik, an aspiring singer-songwriter who one day wakes up into an alternate reality that’s almost exactly like the one he’s always known… except that nobody but Jack has ever heard the music of The Beatles. By singing their songs, Jack becomes an overnight sensation, but fame — coupled with his feeling that he’s doing something dodgy — complicates the musician’s previously low-key life and affects his relationship with his best friend and potential romantic partner (played by Lily James). Ultimately, the story resolves in a conventional way, but its biggest, most welcome surprise starts with an open visual reference to the Beatles song “Yellow Submarine.”

Yesterday joins the ranks of what could be called “semi-Beatles movies” where the Fab Four and their music are central to what the films are about, even though — unlike A Hard Day’s Night and Help! — the Beatles themselves aren’t the stars. In 1978, seven years before director Robert Zemeckis and screenwriter Bob Gale made Back to the Future together, they debuted with the ensemble comedy I Wanna Hold Your Hand, which follows a handful of teens in 1964 as they flock to New York City, hoping to meet The Beatles while they’re in town performing on The Ed Sullivan Show. In 1978, Grease and Saturday Night Fever producer Robert Stigwood assembled an all-star cast for the disco-fied musical fable Sgt. Pepper’s Lonely Hearts Club Band. In 2007, director Julie Taymor brought her uncommon theatrical flair to Across the Universe, which presumes that the characters mentioned in Beatles songs were all real people who kept crossing paths throughout the turbulent 1960s.

It’s not much of a stretch to call Yellow Submarine the first of these semi-Beatles movies. Though the boys do appear at the end in a very brief live-action epilogue, they didn’t actually provide the voices for the John, Paul, George, and Ringo cartoon characters. And while the film is filled with classic Beatles songs, the story and dialogue offer as much of a wildly speculative, secondhand interpretation of the songs’ meanings as Across the Universe.

A team of screenwriters and animators — guided by director George Dunning and producer Al Brodax, who’d both been heavily involved with the earlier Saturday morning cartoon series The Beatles — freely illustrated songs like “Eleanor Rigby,” “When I’m Sixty-Four,” “Lucy in the Sky with Diamonds,” and “All You Need Is Love,” turning their lyrics and moods into rainbow-colored dreamscapes. The film pretends to tell an epic tale of heroic Liverpudlian rockers, using catchy tunes and a loving spirit to battle grimacing blue-hued demons. But this plot is really an afterthought. The destination doesn’t matter as much as the trip. 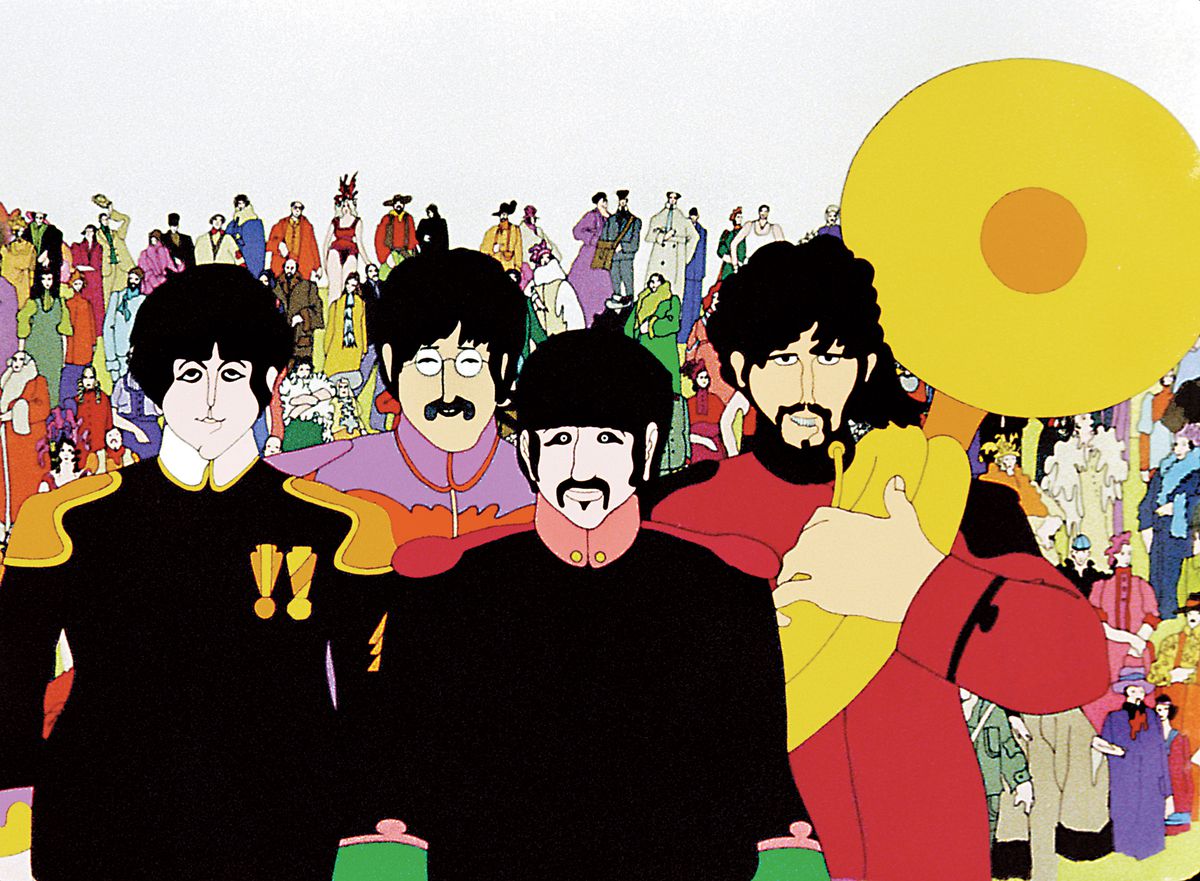 Unlike the simpler, cuter Beatles TV cartoon, Yellow Submarine is aggressively mind-bending, with lead visual designer Heinz Edelman drawing inspiration from underground comics, pop art, advertising, vintage photos, Milton Glaser billboards, pulp fantasy magazine covers, and posters for hippie “happenings.” The film’s look is sometimes falsely credited to Peter Max, who worked in a similar style, and occasionally even took credit for Yellow Submarine, though there’s no documented evidence that he contributed anything to the project. But it’s really more a synthesis of multiple contemporary design trends, bubbling up from the counterculture to the mainstream.

Even given the familiarity of the imagery and the popularity of the music, this is one strikingly strange film. Many young Beatles fans have been perplexed by this picture, with its stream-of-consciousness storytelling and sensory overload. But it’s a movie that plays better and better on repeat viewings, thanks to its explosion of imagination and its inspiring commitment to positivity.

Yellow Submarine was made during the band’s contentious final years, and it’s based on a song that’s been interpreted as a metaphor for celebrities feeling confined by their fame. But it still builds on the earlier movies’ myth that John, Paul, George, and Ringo were all best friends, puckishly sharing inside jokes and kooky adventures. And that’s a fantasy as powerfully compelling as any science fiction film.

Amazon Prime Video. For those who want to spend the whole weekend immersing themselves in The Beatles, the Criterion Channel has the band’s first movie, A Hard Day’s Night, while Hulu has the underseen documentary Good Ol’ Freda, about the Beatles’ secretary and her unique perspective on their superstardom. Netflix has Across the Universe and Martin Scorsese’s in-depth doc about guitarist George Harrison, Living in the Material World.