Gato Roboto opens with what has to be the worst possible outcome of a cat stepping on a keyboard: the misstep causes a spaceship to crash into a mysterious abandoned planet. For players, though, it’s a great outcome, because you get to play a streamlined Metroid game as a cat in a mech suit.

After crashing, Kiki the cat’s owner and partner Gary is pinned down on their ship. Unable to do anything except communicate with Kiki, he sends her off to find a way for them to get off the planet. What Kiki finds is a dilapidated, abandoned lab full of both normal creatures like frogs and squids, but also strange ones like flamethrower robots and carnivorous plants that all seem determined to stop her.

Inside the mech, Kiki has access to a blaster weapon that can only fire in three directions (forward, up and down) and whose shots only travel a short distance before disappearing. This forces you to get fairly close to enemies in order to destroy them. Luckily, the mech also provides Kiki with some amount of protection, letting her take a number of hits before she is killed. Meanwhile, if she’s outside the suit, she’ll get killed with only a single hit from anything. She also can’t attack anything outside the mech, but is faster, more nimble, and able to climb up walls.

Much of the game comes from playing with this discrepancy between Kiki in the suit versus out of it. After the opening section, which acts as a tutorial for both the cat and mech forms of Kiki, the game opens up into three different sections that can be tackled in any order. Each is geared around exploring specific aspects of this dynamic: one is predominantly focused on using only the mech, another on Kiki out of the mech, and the other has a little of both with the addition of a cat-sized submarine she can also pilot. 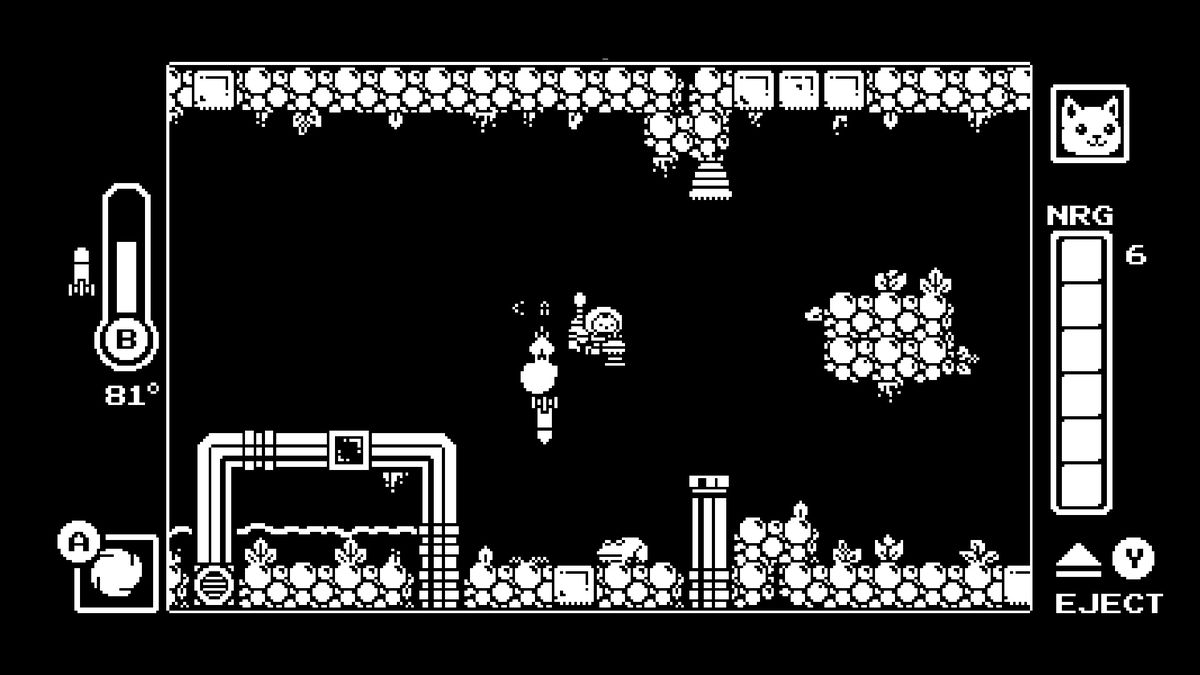 These sections are incredibly well-designed, with each area feeling purposeful. A very subtle and clever thing the game does is introduce new enemies in a sort of controlled environment. There are a number of places where you are locked into a room until you defeat all the enemies, and in a lot of them, they’ll put an enemy you are seeing for the first time either alone or with a few very basic baddies. This lets you learn the new enemy’s behavior in such a way that they can quickly include it in tricky room layouts or enemy combinations without confusing you.

There is an efficiency in the game design that makes Gato Roboto feel concentrated. The lab feels big, but not just for the sake of being big; none of the rooms are without purpose. You always feel like you’re progressing, always getting stronger and better at the game, yet still always being challenged in new ways. Gato Roboto could have just been a Metroid clone — from the screenshots it certainly looks like one. But there is so much clever work in the game’s design hidden behind its very simple black-and-white aesthetic.

Gato Roboto was created by doinksoft. You can get it on Nintendo Switch or on Steam (Windows) for $7.99. It takes about three to four hours to finish.

GoDaddy wins our 2020 award for most evil company email