On July 20, 1969, astronaut Neil Armstrong uttered the now famous line, “That’s one small step for [a] man, one giant leap for mankind,” when he became the first person to set foot on the moon.

It fulfilled the almost as famous “We choose to go to the moon” line delivered by President John F. Kennedy to a crowd at Rice Stadium in Houston, Texas, on Sept. 12, 1962. In that speech the president declared that the United States would send and return a man to the moon by the end of the decade, which he stressed would be no small undertaking.

“We choose to go to the moon in this decade and do the other things, not because they are easy, but because they are hard; because that goal will serve to organize and measure the best of our energies and skills, because that challenge is one that we are willing to accept, one we are unwilling to postpone, and one we intend to win, and the others, too,” Kennedy said in the speech.

The landing on the moon was a major victory for the U.S. in the space race. The Soviet Union had been the first to launch a satellite into space. Less than a year and a half before Kennedy’s speech, on April 12, 1961, Soviet cosmonaut Yuri Alekseyevich Gagarin became the first human to travel into space.

President Kennedy was assassinated a little more than a year after the moon speech, but its achievement is regarded as an enduring legacy of his commitment. 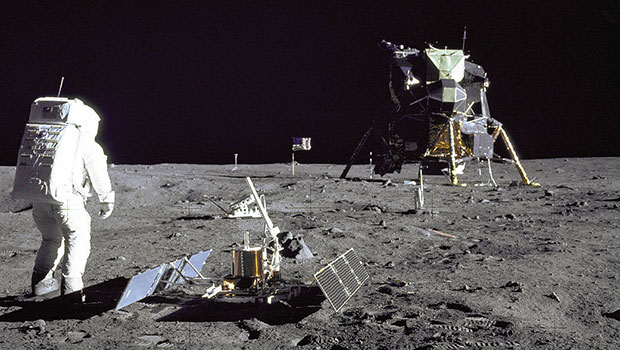 Astronaut and Lunar Module pilot Buzz Aldrin is pictured during the Apollo 11 extravehicular activity on the moon.

The Cost of Sending a Man to the Moon

Even today, 50 years later, the cost of the Apollo Program — which included six successful moon landings, two orbiting missions, and one mission that suffered a major malfunction — has been the subject of debate. From the program’s beginnings in the early 1960s to its end in 1972 it had a price tag of US$25.4 billion, according to a report to Congress in 1973.

A total of 12 men walked on the surface of moon, but the Apollo Program didn’t usher in an era of lunar exploration, and since Apollo 17 in 1972, there have been no further missions to the moon.

Yet the moon landing was notable in that it brought out the best in American industry. In addition to NASA’s 33,200 federal employees, another 377,000 government contractors played a part in sending a man to the moon. 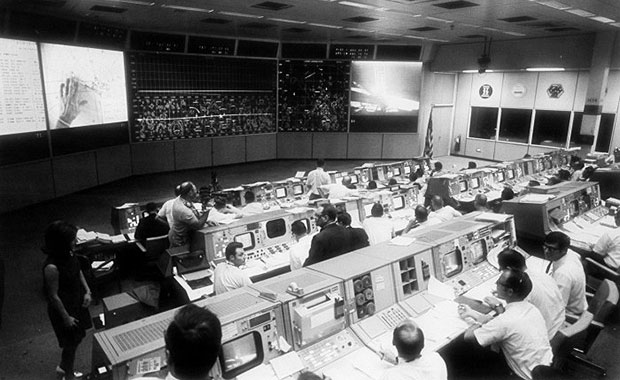 It may have been a small step for a single man, but it took a small army of individuals to ensure the giant leap was able to occur.

The Apollo Mission’s success was due to the fact that it truly had the backing of the American government and the support of virtually the entire American aerospace community. It produced lasting results that are still evident today. 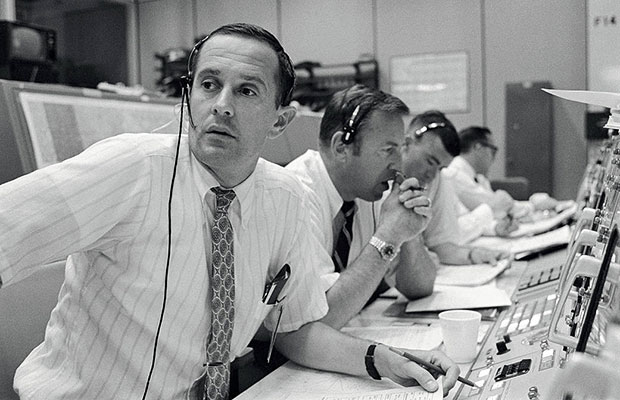 “It took a lot of money and involved a huge support team to do that, but it also inspired a whole generation of kids — including me — to go into the science, technical, engineering and mathematical (STEM) fields,” observed astrophysicist Nadine G. Barlow, associate director of the Arizona Space Grant Consortium.

“It was not just the achievement of the astronauts, but of a huge number of support personnel — from the engineers who designed the rockets, to the mathematicians who calculated the correct orbits, to the scientists who trained the astronauts on how to select the rock and soil samples to bring back for study, to the thousands of everyday people who helped run facilities that trained, fed and provided a place to sleep for the astronauts and everyone else,” she told TechNewsWorld.

It was a huge undertaking that required the commitment of many people from different walks of life.

“Neil Armstrong’s first step on the moon on July 20, 1969, also caused the whole world to come together and look in awe at what humans had accomplished,” added Barlow.

From the First Flight

The other remarkable aspect of the 50th anniversary of the Apollo 11 mission is that it occurred only 66 years after the Wright Brothers’ first flight of just 12 seconds in December 1903. From the short flight on a beach in Kitty Hawk, North Carolina, to a man landing on the moon had occurred in the time of an average lifespan.

It is often noted that the computers used to send a man to the moon have less computing power than modern smartphones, but the technological leap forward from the first plane — which was little more than a motorized kite — was even more significant.

“At the time the space craft were very high tech, but the same was true of the aircraft back in 1903,” said planetary scientist Jim Bell, a professor in the School of Earth and Space Exploration at Arizona State University.

“Of course compared to a modern airplane, the Wright Brothers’ plane was a toy — and when you compare a spacecraft of the 1960s to one today, you see the advancement. That will be true 50 years from now as well,” he told TechNewsWorld.

It is also noteworthy not only that just 66 years elapsed from the first flight to the first mission to the moon, but also that the first manned spaceflight and the moon mission occurred within a single decade!

“The Apollo missions to the moon were an amazing technical achievement in a short period of time — less than 10 years from when Alan Shepard went into space in 1961 to Neil Armstrong taking that first step on the moon in 1969,” said Barlow.

High Tech from the Swinging 60s

The technology that was used to send a man to the moon might have been less powerful than our current phones, but that is why so many systems were required.

“Given that computers were still in their infancy during Apollo it is amazing that it was as successful as it was,” said David Kring, senior staff scientist at the Universities Space Research Association’s Lunar and Planetary Institute.

It was “extremely important they used a quad redundant computing system for reliability,” noted LaNetra Tate, a program executive in the Space Technology Mission Directorate at NASA Headquarters.

This redundancy included computers that had a specific role, primarily the navigation systems, added ASU’s Bell. 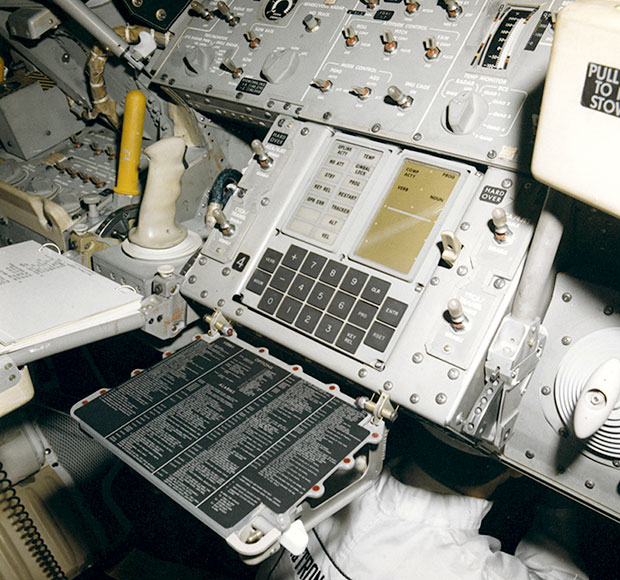 The Apollo Guidance Computer was installed on board each Apollo command module and Apollo Lunar Module.

“Many tasks were manually controlled during the Apollo missions from 1969 to 1972,” he pointed out. Even those that are automated today still require monitoring.

Back to the Moon

NASA earlier this year announced plans to send astronauts back to the moon by 2024 as part of the Artemis Program. Given the major technological leap in computing, as well as advances in propulsion systems and materials, such as carbon fiber, traveling to the moon and back might be less daunting. 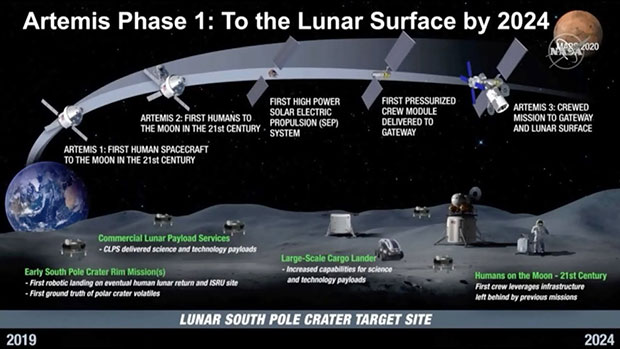 “Today, we have enough computing horsepower to detect — and avoid — landing hazards in real-time,” noted NASA’s Tate. “Overall, today’s computing systems will make it easier and safer to get people from Earth to the moon.”

There also have been great strides in the capabilities and complexity of robotic systems. Still, high-performance spaceflight computing remains key to advancing autonomous human landing systems, she noted.

“In the near term — for example, NASA’s Artemis program — it will likely be a combination of humans and computers that land a craft on the moon’s south pole,” said Tate.

Progress in other areas also will make a difference.

“High-performance spaceflight computing, or HPSC, provides the computing throughput at an affordable size, weight, power and cost required to enable the real-time, highly reliable processing needed for intelligent robotics and autonomous operation of spacecraft and associated platforms,” explained Tate. “The ability to augment the human component of missions makes space travel safer in the same way that doing so on aircraft, and soon in automobiles, has made terrestrial travel safer.”

Much More to Explore

The choice of names for NASA’s next moon program is important — but it might be lost on those who aren’t familiar with Greek mythology. Artemis, the daughter of Zeus and Leto, was the twin sister of Apollo, but she was also the goddess of hunting and the wilderness.

That is an important distinction, because Artemis is not meant to be a replay of the Apollo program.

“Exploration of space is a challenging endeavor, and it is sometimes lost on people how much of the moon hasn’t been explored,” the Lunar and Planetary Institute’s Kring told TechNewsWorld.

The Apollo missions are comparable to Christopher Columbus’ first voyage to the New World, when viewed in the context of what followed.

“We have touched the lunar surface, but we still have to take advantage of what this presents, much like how Lewis and Clark provided an opening to a new land,” said Kring.

Today’s technology is more advanced than what was available in 1969 to 1972, and the moon program promises to be much bigger.

“We can expect larger crews, longer stays that will involve bringing equipment to ‘live off the land,’ and that could include processing the polar ice,” said Bell.

“To be honest, I wouldn’t want astronauts to go back just to plant a flag, collect some rocks and dirt and come home,” he added.

“It was complex at the time, but we do that stuff with robots, so I personally want to see a real exploration mission that requires human ingenuity, and that does things that are worthy of human exploration. We need to push the frontier beyond where it was 50 years ago.”

The Artemis Program could be the start of a new era of space exploration, and this time the moon isn’t the goal, but just the next step that gets mankind in position for the next giant leap.

“We are moving more slowly now as we make plans to return to the moon and go on to Mars,” said the Arizona Space Grant Consortium’s Barlow.

“It is human nature to explore, and is unlikely that we will be satisfied remaining behind on Earth now that we have the capability to travel to space,” she added.

“We no longer are interested in sending astronauts to the moon for a few hours at a time — we now are talking about establishing colonies for a long-term presence to better explore the moon and develop its resources,” Barlow explained.

Whereas Apollo demonstrated that we could get humans to the moon for a very short stay, the next step will be work out what it takes to establish and maintain a longer-term presence for humans in space.

“That again will take the commitment of a large number of people to help make it happen, but it will inspire a new generation of students to tackle these challenges by developing new technologies and making new discoveries that will benefit all of humankind,” Barlow said.

The words of President Kennedy — to do not what is easy — may again resonate.

“It is in our nature to do the things that are hard,” said Kring. “Landing at the lunar south pole and developing a sustainable program is going to be hard — but it will be worth the effort.”

The rules only sex tech companies have to follow at CES