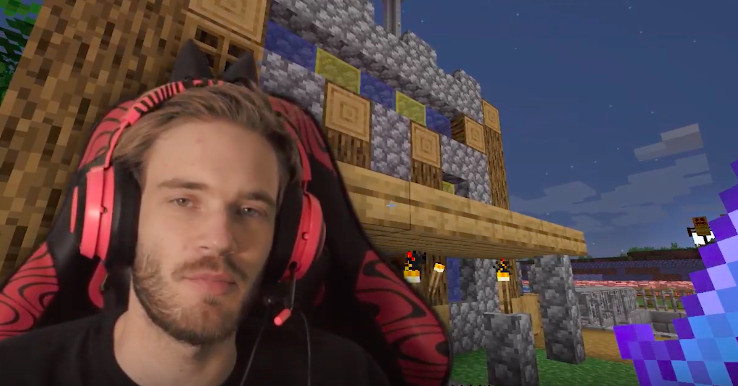 Almost two months ago, Felix “PewDiePie” Kjellberg did something his fans have wanted for years: he made a Minecraft video, and he’s continued to make them ever since. The result was Kjellberg’s most successful month in years, pulling in more than 570 million views in July and kickstarting a new trend among some of the biggest YouTube creators.

For the first time since January 2017, Minecraft has surpassed Fortnite as the most-searched game on YouTube. Minecraft is having a moment again, and it’s reminiscent of one of YouTube’s earliest gaming trends known as the “PewDiePie Effect.”

The “PewDiePie Effect” is a term that YouTuber and commentator Matthew “MatPat” Patrick used in a recent video to talk about creators’ influences on the actual market. Back in 2014 when Kjellberg (a controversial YouTube creator who has faced criticism for using racist language during a gaming stream and featured anti-Semitic imagery in a video) was still operating primarily as a gaming channel, his decision to upload a “Let’s Play” series of a certain game typically manifested in more sales of that title.

Minecraft doesn’t need Kjellberg; Mojang’s crafting game has 91 million monthly players. Its success, however, is due in large part to YouTube. The game found a home on YouTube that didn’t exist anywhere else, becoming the second-most-searched term on the platform back in 2014. Ironically, it was because of that popularity — and creators jumping on the bandwagon looking for attention — that Kjellberg never played it.

“It felt like people were playing it just because it was popular, and not because they were actually [having fun] doing it,” Kjellberg said in a recent video.

For the first time since January 2017, ‘Minecraft’ has surpassed ‘Fortnite’ as the most-searched game on YouTube

Minecraft has now become a full-time job for Kjellberg, who said he’s having a blast just playing through the game. He even admitted in the same video that he “hasn’t paid attention to what anyone’s doing” online anymore, adding that “it’s so goddamn liberating.”

His efforts are paying off. VidIQ, a company that builds tools for YouTube creators to focus on their analytics, found that Kjellberg is the “top creator for the [Minecraft] keyword right now,” according to content strategist Rob Wilson. That means when people search the term “Minecraft,” many of the videos on the first page are his.

“Essentially PewDiePie has embraced the most basic principal in the YouTube playbook,” Wilson wrote. “Focus on a topic, and deliver that to your audience with every single video that you make.”

His reignited interest in the game has led to other YouTube creators picking up on the trend. Sean “Jacksepticeye” McLoughlin, a creator with more than 22 million subscribers, has started to play the game, too. People have picked up on Minecraft having a moment and have decided to jump on the train before it goes away again. It’s not entirely because of Kjellberg — YouTube creator Keemstar’s weekly Minecraft tournaments, for example, also drive traffic and interest — but Kjellberg’s visibility is a major factor, according to Wilson.

“This will also explain why some of your favorite YouTubers have suddenly returned to Minecraft, or started dabbling in it, jumping on the wave of a returning trend in this case,” Wilson wrote. “And I’m not going to lie to you, folks, that’s exactly what we are doing right now. Jumping on a trend.”

“This will also explain why some of your favorite YouTubers have suddenly returned to Minecraft.”

Kjellberg’s says he’s simply having fun with Minecraft (a point he underlines in almost every video now), but he’s also reaping the financial benefits. Minecraft isn’t just the number one game on YouTube globally, as cited by Ryan Wyatt, head of YouTube Gaming; it’s also one of the most advertiser-friendly games.

Video games have become an increasingly difficult content category to monetize. Even mega-conglomerates like AT&T have signaled out gaming as the type of content they don’t want to advertise on. But there are a few games that advertisers do feel comfortable with because they’re not viewed as being violent and are family-friendly; Fortnite, Roblox, and Minecraft are three of the more popular titles.

Those 570 million views in July also translate to Kjellberg making money from his recent Minecraft obsession. The ability to earn more may be a driving factor for other creators who are jumping on the trend and hoping that the trickle-down effect will boost their income.

Minecraft right now is proof that the “PewDiePie Effect,” a term coined five years ago, is still very much a phenomenon on YouTube.

Salesforce CEO hates Section 230, but his lawyers sure don’t