At Samsung’s Galaxy Unpacked event yesterday, the company announced no fewer than four partnerships. There was a deal with Discord to build its gaming-focused chat app into Samsung’s game launcher; one with Under Armour to release a special edition of the Galaxy Watch Active 2; Microsoft is bundling its Android apps on the Note 10; and Samsung even invited a representative from the United Nations up onstage to promote a new development goals app that will be preinstalled on Samsung’s phones.

These partnerships set Samsung up to take on longtime rival Apple this holiday season, and even Google as the search giant looks to muscle in on high-end Android sales with the Pixel 4.

Perhaps most notably, Microsoft CEO Satya Nadella appeared in person to emphasize the importance of his company’s partnership with Samsung, which he said was aiming to “eliminate the gap between mobile devices and the PC.” Microsoft’s Your Phone app will come preinstalled on the Note 10 to let you view your phone notifications and more on Windows 10, and Samsung’s DeX software now lets you mirror your phone screen to your PC (although yes, the DeX functionality also works on the Mac).

Microsoft’s CEO appeared onstage with the CEO of Samsung Electronics

The cynical explanation for these partnerships is that they’re short-term co-branding and marketing stunts. The Under Armour edition of the Galaxy Watch Active 2, for example, costs $30 more than the regular LTE edition of the watch (more money for Samsung), and it comes preloaded with a free six-month subscription to the MVP version of Under Armour’s MapMyRun app (more promotion for Under Armour). The watch is also the only Samsung smartwatch that will be able to connect to Under Armour’s HOVR shoes.

Then there’s Samsung’s partnership with Microsoft. Along with integrating the functionality of their devices, Microsoft said it will also stock Samsung hardware and sell it through its retail locations. We’ve already seen how Microsoft intends to display its products as part of a collection with Samsung’s in its stores. It’s cross-promotion all around, and it’s sure to help Samsung as we move into the holiday season and Apple prepares to reveal its 2019 iPhones in September. 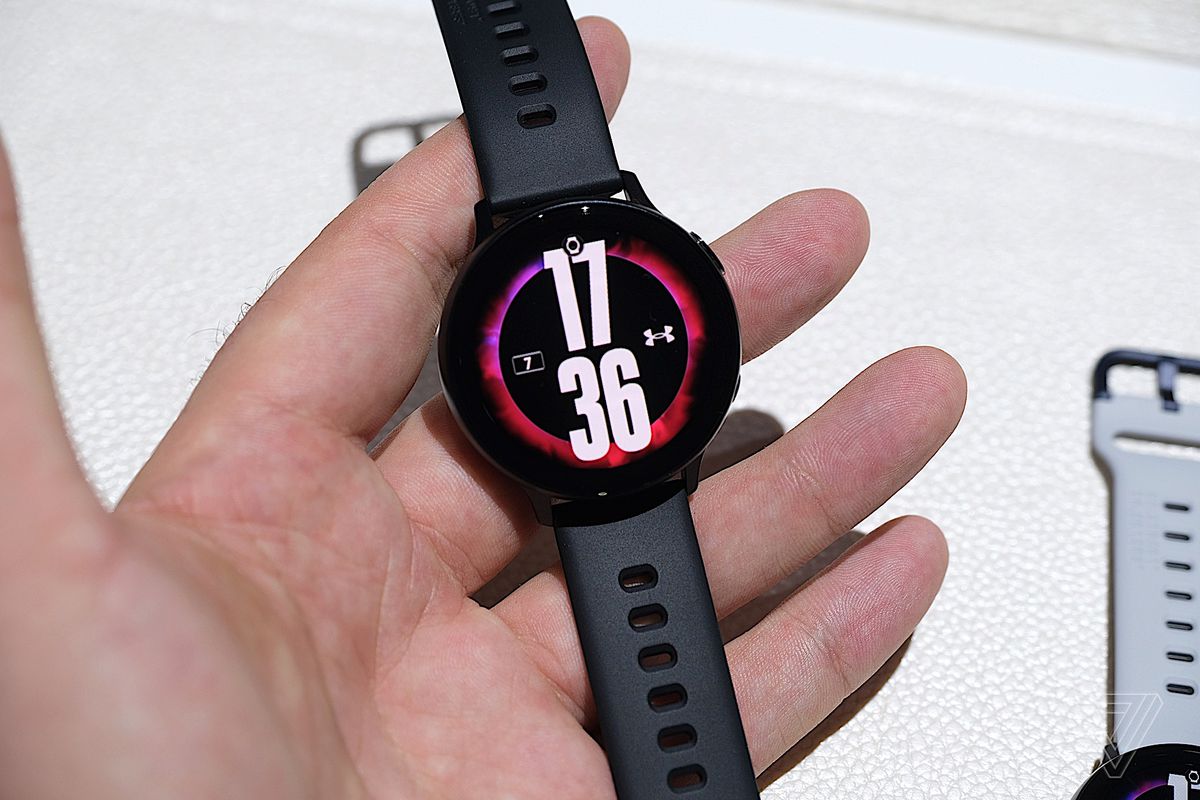 The Under Armour edition of the Active 2 smartwatch comes with the fitness company’s software preinstalled. Photo by Chris Welch / The Verge

But along with having cross-promotional benefits, the partnerships are also a symptom of the fact that even the biggest phone manufacturer in the world can’t get by on its own. Samsung’s phones are good devices, but nobody would consider buying them if the phones didn’t contain apps that people actually used on a daily basis or couldn’t connect to the other devices in their lives.

Take DeX as an example of this new approach to partnerships. Samsung’s DeX software is nothing new; it first appeared as a feature with the Galaxy S8 in 2017, and Samsung refined it with the Note 9 last year when it allowed you to plug your phone into a monitor with a simple USB-C to HDMI cable. DeX was never a particularly bad product; it just never completely delivered on its promise of turning your phone into a fully fledged desktop PC.

The difference this year is that Samsung is focused less on having your smartphone replace your PC and more on having the two of them work better together. As Nadella put it, Samsung and Microsoft are working to “eliminate the gap” between their respective devices. DeX will still allow your smartphone to plug into your monitor and work as a computer, but it can also be plugged into a PC or Mac and mirror your phone screen in a dedicated window. In other words, Samsung is taking DeX in a new direction — only now it can partner with your existing computer, rather than trying to go it alone and replace it entirely. 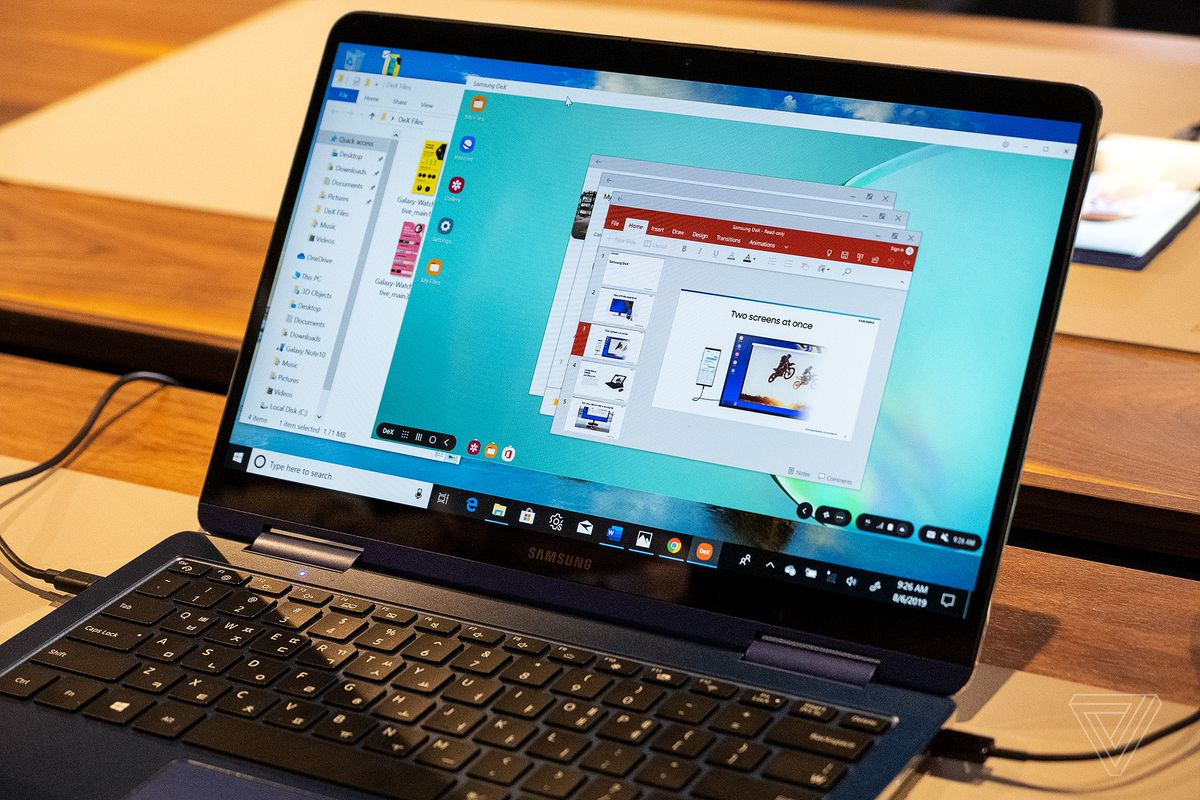 The Note 10 will be able to mirror its screen when plugged in to a PC or Mac. Photo by Chris Welch / The Verge

DeX isn’t the only instance where Samsung has been guilty of attempting to do it all by itself when it comes to consumer tech. Until now, the company’s insistence on pushing Bixby as opposed to the far more capable Google Assistant has been a big problem. Even when it let you remap the Bixby button on its previous phones, Samsung stopped short of letting people easily re-map the button to activate Google’s voice assistant. However, there are signs that Samsung’s attitude toward Bixby is shifting. Although the company ran plenty of Bixby trailers in the run-up to the show’s live stream, it didn’t mention its voice assistant once onstage during the show. With the Note 10, Samsung has also ditched the dedicated Bixby button seen on Samsung’s previous handsets (though Bixby remains accessible through a long-press of the power button).

Samsung isn’t the only company to have realized the value of partnerships. It’s not uncommon for Apple to have executives from other companies make appearances at its product announcements. Nintendo’s Shigeru Miyamoto appeared onstage during Apple’s 2016 iPhone announcement to announce that Super Mario Run would be a timed exclusive on the App Store, and we’ve also seen Nike executives appear as part of Apple’s collaboration with the company on the Nike Editions of the Apple Watch. Microsoft even appeared onstage at Apple’s iPhone keynote in 2015 to demonstrate Office.

Of all the partnerships Samsung announced yesterday, its tie-up with the UN is the one with the least obvious benefit for the company. The implications for Samsung’s customers are fairly minimal. The UN’s Global Goals app, which is designed to raise awareness and funds for the UN’s development program, will come preinstalled on the Note 10, and Samsung will also sell special edition Galaxy mobile phone accessories, with all profits used to support the global goals.

However, when you consider that Apple and Google have both spent significant portions of their recent press conferences talking up their approaches to user privacy and digital well-being, the appearance of a UN representative at Samsung’s presentation starts to make a little more sense. As the tech industry reckons with a growing “techlash” that has angered lawmakers, customers, and even their own employees, tech companies are working hard to prove that they know the value of corporate responsibility. Samsung doesn’t have the same kind of OS-level control as Apple and Google, meaning it’s less able to introduce its own digital wellness features. But a partnership with the UN is exactly the kind of thing that Samsung could use to build a similar kind of goodwill.

Yesterday’s event was almost entirely about products. It was about the launch of Samsung’s most spec-heavy phone of the year, the Note 10. It was about reminding people about its recently announced Android Tablet, the Tab S6, and its smartwatch, the Galaxy Watch Active 2. And it was about announcing its new ARM-based laptop, the Galaxy Book S.

But underlying all of these announcements was the implication that when you go with Samsung, you’re not just getting access to its hardware; you’re also buying into its entire ecosystem of apps, device partnerships, and marketing clout. These partnerships will matter the most in the coming months when Samsung will be battling Google, its Android partner, while it gradually teases more and more about the Pixel 4. Samsung also has Apple’s traditional September iPhone reveal to contend with. Faced with this stiff competition, even the biggest smartphone manufacturer in the world knows that it can’t go it alone.

Ransomware reportedly to blame for outage at US hospital chain