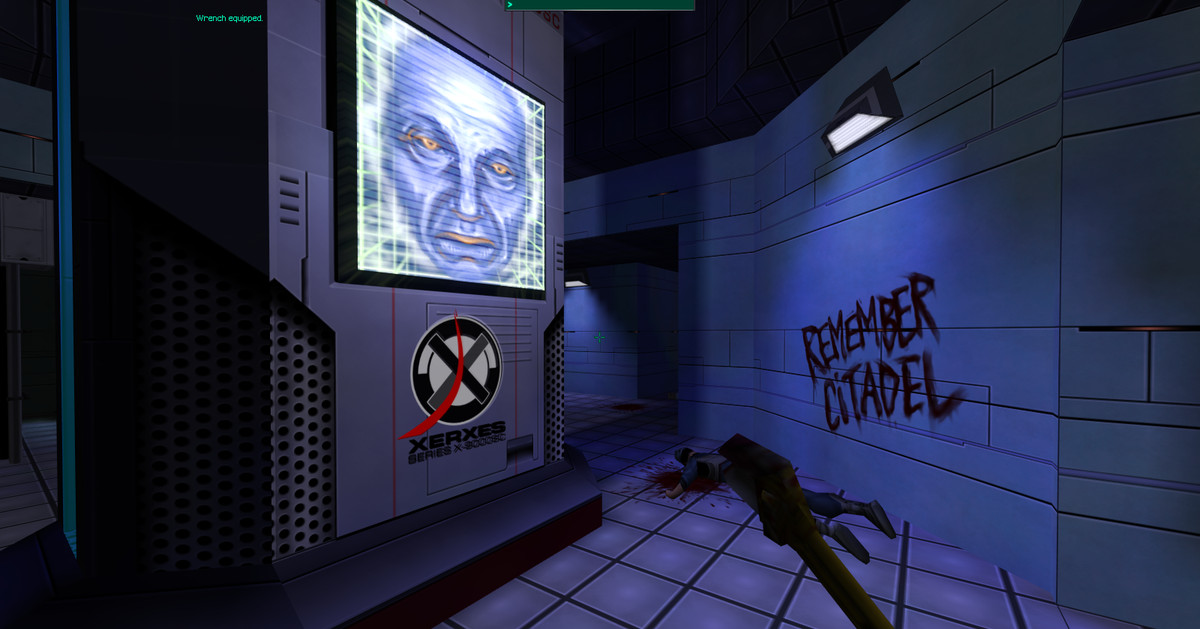 The engineering deck in System Shock 2, the classic Looking Glass game released 20 years ago today, is one of the most brilliantly nerve-wracking virtual spaces ever created.

System Shock 2 wasn’t a huge success at launch. It was sandwiched between Half-Life and Deus Ex, two games that redefined the sci-fi first-person shooter. And for many years, it was almost impossible to play legally, thanks to its bizarrely tangled copyright status. But it inspired a generation of iconic survival horror games like Prey, Dead Space (conceived as a System Shock sequel), and most notably BioShock, created by System Shock 2’s designer Ken Levine. And even after two decades, nothing has quite captured the same stark creepiness.

Survival horror games often focus on vulnerable, ordinary characters and induce a sense of paranoid powerlessness, stripping down interface elements or tweaking camera movements to imitate a frail human body’s motion. System Shock 2 has an unstoppable cyborg protagonist and a role-playing game’s love of quantification. Like its 1994 predecessor System Shock, it’s a cyberpunk game overstuffed with powers and weapons — you play as an unnamed soldier on a faster-than-light spaceship seemingly overrun by parasitic aliens.

System Shock 2 overwhelms you when you’re at your weakest

But unlike its predecessor, which let you use any equipment you picked up, accessing these weapons and powers is hard. System Shock 2 uses a complicated upgrade system with draconian cutoffs for equipping important items. Your protagonist can be augmented into a super-hacker, a master of energy weapons and old-fashioned firearms, or a psychic warrior with pyrokinetic power and invisibility cloaking. He’s also highly vulnerable until you build up the right set of complementary upgrades, which requires progressing the plot long enough to earn dozens of rare “cyber modules.”

Meanwhile, the game overwhelms players with constantly deteriorating weapons and wandering enemies, wearing them down while they’re at their weakest, even as it dangles the promise of inhuman power in front of them.

System Shock 2’s first few hours can be brutally difficult as a result, reaching their lowest point on the aforementioned engineering level. It’s a series of corridors and shadowy cargo bays all designed to hammer every possible vulnerability. Your dependable melee weapon becomes useless against a stream of kamikaze service droids. The hallways are full of laser turrets, deadly radiation leaks, and possessed former crewmates. The cargo bays are lined with dormant droids that could wake up at any minute. The rich sound design lets you hear enemies long before you see them, opening automatic doors in the distance or calling to you in tortured voices.

Survival means figuring out which scarce resources you can waste, including your own health. Instead of trying to make your character feel realistic or human, the game pushes you to coldly embrace being a machine, hyper-optimizing every interaction with the world. If you encounter a bear-sized security robot, your most efficient option is often to run headlong into its body while flailing a wrench, hugging the safe space between its cattle-prod-like harm. Exploiting the occasional genuine bug — like a single pistol that never degrades, found in the game’s later sections — doesn’t even feel like cheating.

And this kind of calculated play makes perfect sense in the System Shock universe, where traditional cyberpunk corporate wars have given way to a ruthless monopoly that approaches totalitarian socialism. Both games effectively take place in hermetically sealed, spacebound company towns. The original is set in a space station called Citadel, the sequel on a ship called the Von Braun, run by the sinister TriOptimum Corporation and a toothless futuristic United Nations.

Traditional cyberpunk corporate wars have given way to ruthless monopoly

The Von Braun’s living areas are bland and sterile, strewn with potted plants and art screens that cycle between a handful of fuzzy paintings. Money has technically been abolished, but you still have to “buy” egregiously expensive products from Star Trek-style replicators using nanite construction material. Human enemies are horrifically transformed monsters, but TriOptimum-constructed mechanical ones are unsettlingly emotionless or even chipper — the service droids hunt you down to cheerfully ask if you need help with anything, then explode in your face.

Unlike scads of other cyberpunk games, including the upcoming Cyberpunk 2077, there’s no room for hip countercultural rebellion in System Shock. Its big conflicts turn out to be an accidental byproduct of corporate infighting. System Shock 2’s “aliens” first appear to come from Tau Ceti. They’re actually the creations of a rogue TriOptimum AI named SHODAN, who is the villain of System Shock, but secretly guides the player through much of System Shock 2 before revealing her existence.

As you form an uneasy alliance with SHODAN, she pushes you to leave your weak flesh behind by continuously upgrading your body. Where some of System Shock 2’s spiritual sequels (primarily Prey) present this as an optional moral choice, it’s taken for granted that you’ll follow her advice.

A new sequel to System Shock is apparently in development, led by the original game’s producer Warren Spector. At a point where so many designers have drawn inspiration from the series, it could easily be overshadowed by spiritual sequels like BioShock. But if we’re lucky, it could capture the tension between fear and power that made System Shock 2 so fantastic — and that few games have matched.

Free Devil May Cry 5 Bloody Palace Update Being Rolled Out for PC, Xbox...

Call of Duty Vanguard Alpha ‘Slipstream’ Surfaces on PSN and Battle.net; Weighs in at...

Apple pushes back return to offices due to rising COVID cases:...