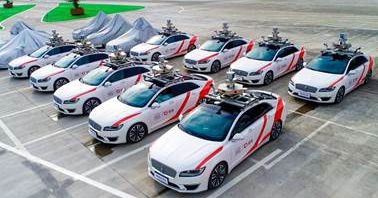 The local government in Shanghai recently awarded Didi a permit to test its autonomous vehicles on public roads in Jiading District of Shanghai, though the company says it plans to expand beyond that district starting in 2021, according to Reuters. The company says it will deploy “30 different models of L4 autonomous vehicles.” (L4 means Level 4 on the Society of Automotive Engineers scale of autonomy, which means the vehicle is able to operate without any human intervention within a defined geographic area.)

Didi has had a very interesting couple of years, to say the least

Customers can use Didi’s app to summon an autonomous vehicle to pick them up. But the cars will most likely include a human driver behind the wheel. All self-driving rides will be free of charge. “Given the complex traffic and road conditions in the megacity, Didi will begin the program with a mixed dispatching model, which will combine both autonomous vehicles and human-driving vehicles for the duration of the pilot robo-taxi project,” the company says.

Didi has had a very interesting couple of years, to say the least. The company first crossed many people’s radars in 2016 when Apple announced it had invested an eye-popping $1 billion in the ride-hail service. At the time, Didi was locked in an intense competition with Uber for China’s rapidly growing ride-hail market. It was around that time that Didi started poaching engineers from Silicon Valley to come work for its nascent self-driving program.

Eventually, the battle grew too costly for Uber, which was reportedly burning through $1 billion a year to compete with Didi. In August 2016, then-Uber CEO Travis Kalanick said he would sell Uber’s Chinese business to Didi for a 17.7 percent stake in Didi and a seat on the company’s board. In exchange, Didi invested $1 billion in Uber.

Didi has also invested in many of Uber’s rivals, including Lyft, India’s Ola, Singapore-headquartered Grab, Estonia’s Taxify, Careem in the Middle East (which was recently acquired by Uber), and Brazil’s 99. Last year, Didi expanded into Mexico, intensifying its global rivalry with Uber.