This evening, SpaceX CEO Elon Musk will give an update on the design and future of his company’s next-generation rocket, Starship, a massive vehicle that is meant to take people to the Moon, Mars, and beyond. The concept for Starship has evolved in numerous ways over the last few years, and now Musk plans to reveal the vehicle’s latest blueprints.

Musk is giving an hour-long presentation on the rocket at SpaceX’s test facility in Boca Chica, Texas, a tiny town just north of the Mexican border. SpaceX has been building lots of test hardware for Starship at the site, and the CEO will likely be surrounded by this shiny material during his talk. As you watch, keep an eye out for a large Starship test vehicle that’s meant to perform high-altitude test flights in the months ahead.

It’s unclear exactly what Musk will discuss. He mentioned on Twitter that this talk is “mostly a design update for those interested,” though he might touch on the longer-term plans for Starship, as well. The discussion will get underway at 8PM ET; here’s what you need to know before the show.

Musk has made it abundantly clear that his goal for SpaceX is to send people to Mars, and he’s long discussed building a giant spaceship and rocket to make that happen. In the early 2010s, Musk first referred to this then-mysterious vehicle as the Mars Colonial Transporter, or MCT, and also gave it the nickname the BFR, which technically stands for Big Falcon Rocket (the “F” also refers to another word). But no one knew how it would work, or what it looked like.

In 2016, Musk finally unveiled the first concept for his Mars vehicle during a meeting of the International Astronautical Congress (IAC) in Guadalajara, Mexico. He showed off animations for truly massive hardware: a rocket and spaceship combo that towered over 400 feet tall and stretched 37 feet wide. Forty-two new engines would be used to power the system, and it would be able to carry up to 100 passengers to deep-space destinations. The vehicle even got a new name — the Interplanetary Transport System — since Musk claimed it could go well beyond Mars. It would have been the most powerful rocket ever created, easily eclipsing NASA’s Saturn V rocket that took humans to the Moon. 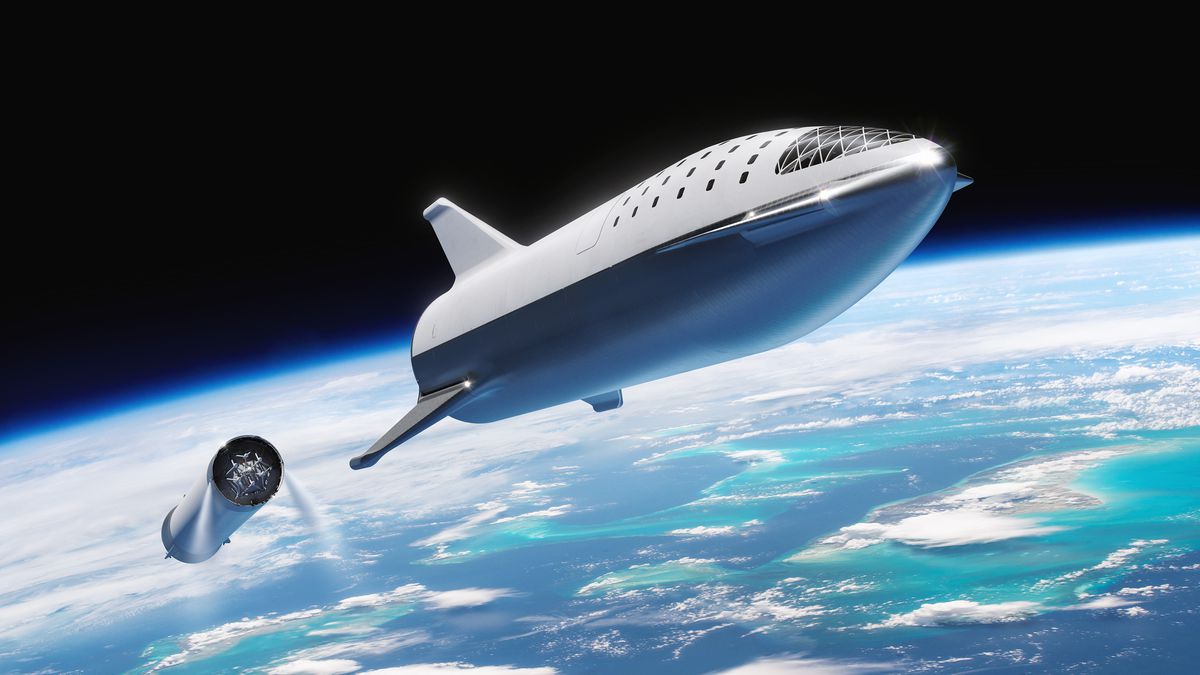 An artistic rendering of one version of Starship from 2018 Image: SpaceX

A year later, Musk scaled down the system. In another presentation at the IAC, this time in Adelaide, Australia, the CEO showed off a skinnier and shorter version of the rocket and spaceship, which only needed 31 engines, not 42. He noted that the smaller version would make it easier to fund. “In last year’s presentation, we were really searching for how to pay for this thing,” Musk said in 2017 at IAC. “We went through various ideas, Kickstarter, you know, collecting underpants. These didn’t pan out. But now we think we’ve got a way to do it, which is to have a smaller vehicle.” Musk claimed that SpaceX would eventually put all its resources into the new rocket, which would one day replace the capabilities of the company’s current fleet of rockets. The vehicle also went back to the nickname BFR.

It only took a year for the architecture to change again. In September of 2018, Musk announced the first commercial passenger for the rocket, Japanese billionaire Yusaku Maezawa, and gave more updates on the vehicle’s design. SpaceX decided to add three large fins to the spaceship, and adjusted the arrangement of the engines at its base. The name changed soon after, too. In November of 2018, Musk declared that the ship would now be called Starship, and the rocket that would take it to space would be named Super Heavy.

Since then, details have changed even further, with the material for the vehicle switching from carbon composite to stainless steel. The design for the system remains very fluid, which is why today’s update is warranted.

What we know so far

While Starship has sported a number of different looks and names over the years, a few key things have stayed the same. For one thing, the entire system relies on SpaceX’s next-generation engine called Raptor. The hardware, first test fired in 2016, runs on oxygen and methane, two materials that can potentially be harvested on Mars. Each engine provides about 440,000 pounds of thrust, about twice that of the Merlin 1D engine that powers SpaceX’s currently operational Falcon 9 fleet.

Additionally, Starship has always been a two-part system: a giant rocket and a passenger spaceship. Because of Earth’s gravity, the rocket booster is needed to loft the massive Starship into space. To get out of our planet’s orbit, another, different kind of Starship will be needed. While the first passenger Starship is parked around Earth, another Super Heavy will need to launch a second “tanker” Starship, one filled with mostly propellant. The tanker could then meet up with the Starship already in orbit and transfer its propellant to the vehicle, providing enough fuel for the ship to travel to the Moon or Mars.

Above all, the entire thing is meant to be reusable. Both the Super Heavy and Starship are supposed to be capable of performing propulsive landings — where the vehicles lower themselves down to a surface using their own engines. It’s the same method SpaceX uses to recover its Falcon 9 rockets after launch.

In the last year, SpaceX has really accelerated production and testing of its Starship program. The company has been building Starship parts and prototypes in both Boca Chica and Cape Canaveral, Florida, where the company launches the majority of its rockets. Locals in each area have been eagerly snapping photos of production, keeping everyone abreast of the progress.

After a few engine tests in Texas, SpaceX performed its first big test flight out of Boca Chica this August. A prototype Starship vehicle called Starhopper flew to an altitude of about 500 feet, with one Raptor engine attached, and then landed back down on the ground. It marked the first time a Raptor had propelled the vehicle to any substantial height.

SpaceX quickly retired Starhopper after that August flight, and is now focused on flying its next vehicles. Teams at both Boca Chica and Cape Canaveral have been racing each other, building much larger prototypes of Starship that look closer to the final design. The one in Boca Chica is nearing completion; its top and bottom halves were connected yesterday, and it has three Raptor engines mounted to its base. The goal for these new prototypes is to fly even higher than Starhopper, potentially reaching heights of more than 12 miles before landing back down to Earth.

Musk has a lot of plans for the project beyond simply taking people to Mars. In recent years, he’s been very vocal about using Starship to start a lunar base — just as NASA vowed to send people back to the Moon. Musk even proposed using Starship to send people across the globe during super-fast suborbital flights, a concept known as point-to-point travel. He’s also noted that Starship doesn’t need to carry passengers at all. Instead, it could be used to deploy a large crop of satellites into orbit or to resupply the International Space Station.

It’s all very ambitious, and even more ambitious is Musk’s timeline for everything. Known for proposing unrealistic deadlines, the CEO envisioned Starship making its first flight orbit as early as 2022, with people flying to Mars by 2024. That’s an incredibly quick turnaround, especially since the Super Heavy portion of the system hasn’t even been built yet. However, SpaceX’s President, Gwynne Shotwell did accurately predict last year that Starship would be doing short hops by the end of 2019.

There are still plenty of questions left unanswered about SpaceX’s deep-space ambitions — especially when it comes to the internal infrastructure needed to keep people alive in deep space and other worlds. Up until now, we’ve mostly heard about the specs of the vehicle’s propulsion systems, but the details of things like habitats and ways to combat deep-space radiation haven’t been a focus. It seems unlikely Musk will talk about those things today, but those topics will need to be a part of the discussion long before anyone takes a ride on Starship.

Quake II RTX is the perfect ray tracing demo, and it’s out for free next week