First announced way back at Google I/O 2018, the JBL Link Bar is an ambitious device that aims to combine the functionality of a soundbar, an Android TV streaming box, and a Google Assistant smart speaker. Now, over a year later, the $399.95 soundbar is finally available to buy, and we can find out if you’re really getting three devices seamlessly merged together, or a Frankenstein’s monster.

Occasionally, when the stars align, there are glimpses of an amazingly convenient device here. In the right circumstances, you can use a voice command to simultaneously turn on your TV and soundbar, find the content you want to watch, and start playing it, all without picking up a remote.

Most of the time, however, the JBL Link Bar never manages to combine its three strands of functionality into a cohesive whole. Yes, it might be cheaper than buying a streaming box, soundbar, and smart speaker separately, but this way you end up with one temperamental device, rather than three functional ones. 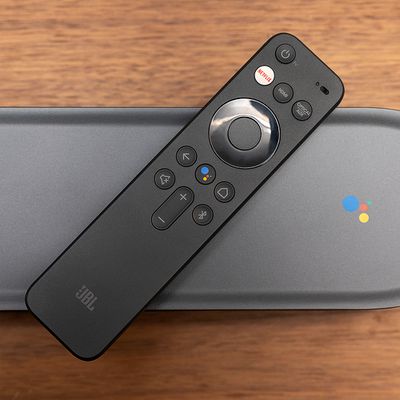 The JBL Link Bar has the physical appearance of your typical soundbar. Contained within its 40-inch length are six drivers in total, including two 0.8-inch tweeters, and four 1.7-inch by 3.2-inch drivers. Together, these offer two channels of audio. You can also pair the soundbar with an external wireless subwoofer, JBL’s SW10. Around the back is a decent selection of ports, including four HDMI 2.0 inputs that JBL tells us support 4K, HDR10, and Dolby Vision passthrough; one HDMI 2.0 output; aux in; optical in; and an Ethernet port. What these ports mean is that it’s possible to connect your external devices like Blu-ray players and games consoles directly into the soundbar, and then have the soundbar pass their video stream onward to the TV.

The first sign that there’s more going on with the JBL Link Bar than your typical soundbar comes when you take a closer look at the top of the speaker. Here you’ll find a Google Home-style microphone switch alongside an HDMI selector, volume buttons, and Bluetooth button. This mic switch is necessary, because the JBL Link Bar is equipped with similar far-field microphones to a regular Google Assistant smart speaker. If you leave it on, the Link Bar will be constantly listening out for its wake word, with no need for you to hold the Google Assistant button on its remote first. 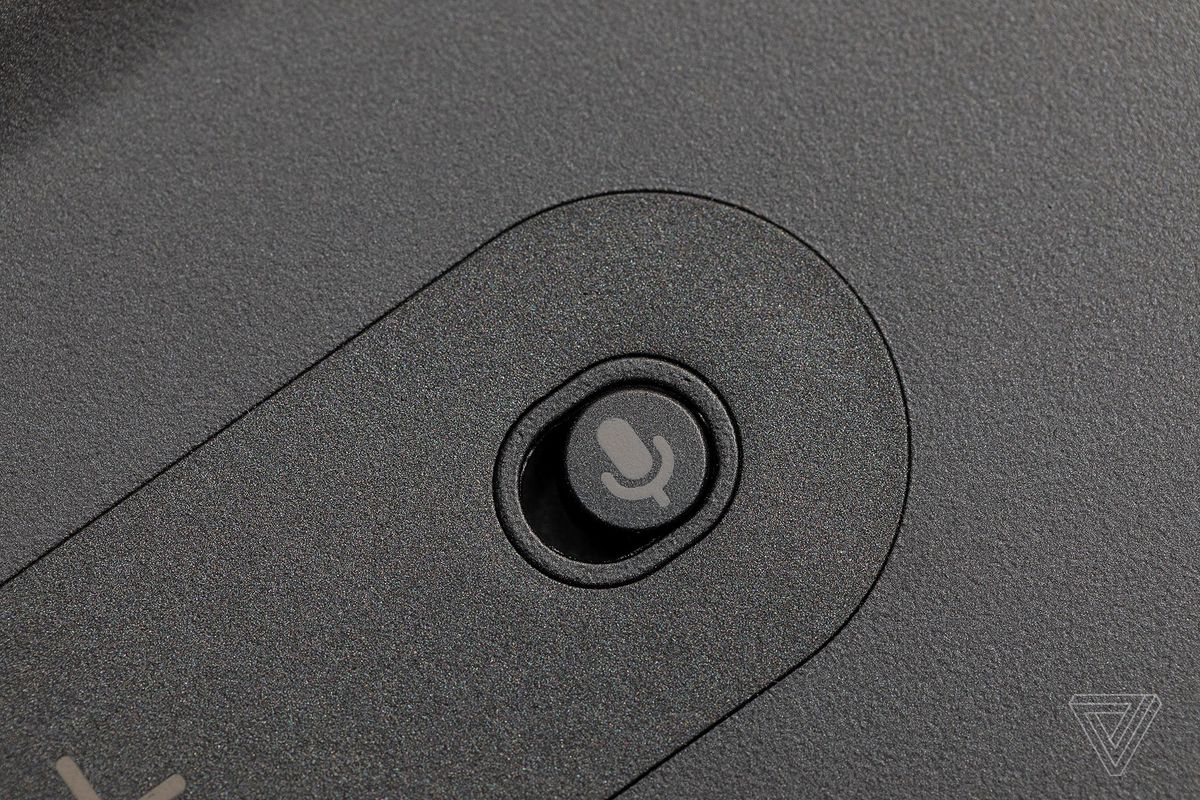 In theory, this means that you should be able to make your way around the Link Bar’s Android TV interface largely without needing to pick up its remote, which has a dedicated Google Assistant button alongside a typical selection of navigation, volume, and input selection buttons. I found the amount of buttons on the remote struck a nice balance between functionality and simplicity, and the interface was relatively responsive. I was thankful for this, since I had to rely on the remote whenever the soundbar’s voice commands came up short. This happened a lot.

During testing, there were some simple use cases where having a voice assistant-enabled soundbar felt really helpful. When playing games on a Nintendo Switch console that was docked and plugged into one of the soundbar’s HDMI inputs, for example, it was really helpful being able to quickly use a voice command to raise or lower the volume mid-game, without having to take a hand off the controller. 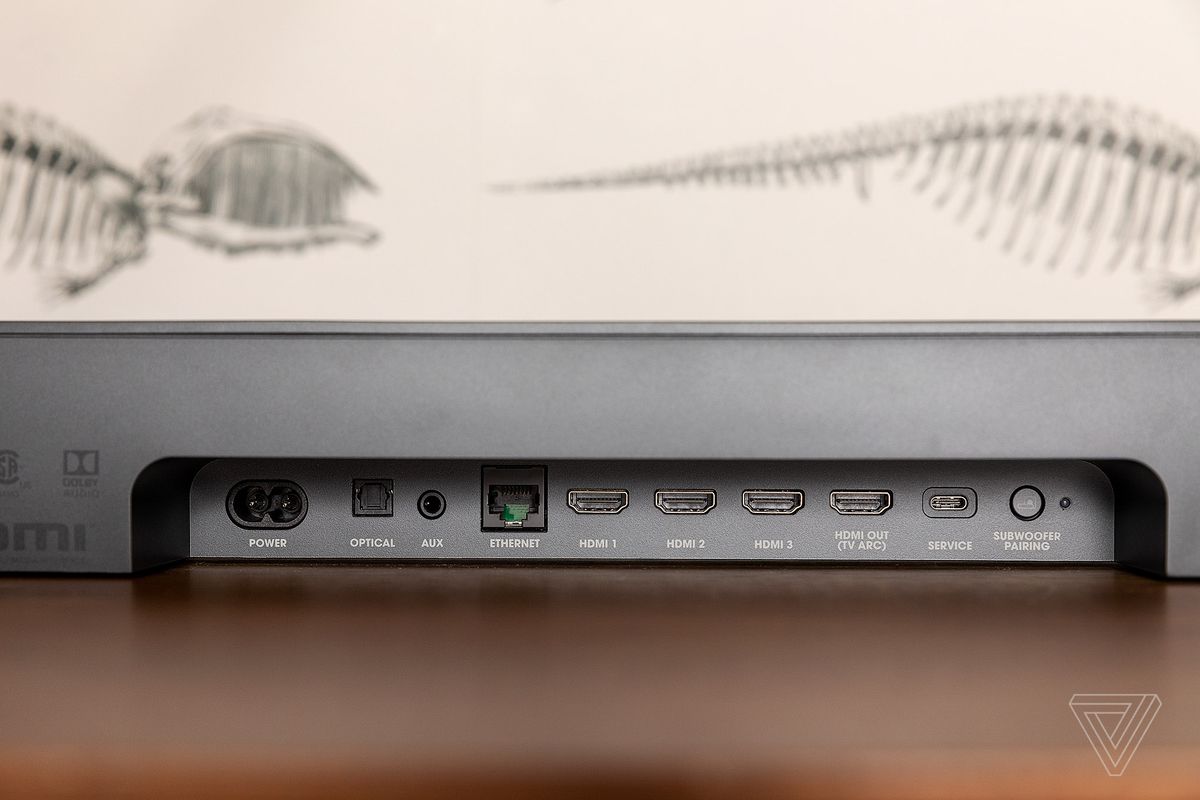 For more complicated requests, however, there were frequently times when it either took a long time for the soundbar to process my voice requests, or it just didn’t seem possible to get the results I wanted while using my voice. The experience also seemed to be very buggy.

Streaming music should be a pretty simple bit of functionality since it forms a large part of what the Google Assistant is able to do on smart speakers. For whatever reason, however, I found that Spotify playback would frequently pause a couple of seconds after a song started, forcing me to use a second voice command to restart it. It would also insist on turning on my TV to show me Spotify’s “Now Playing” screen, which felt a little redundant when all I needed was audio. I ended up connecting my phone to the soundbar via Bluetooth when I wanted to use it to play music, as this provided a simpler user experience overall.

When playing video content, voice controls were even more hit-or-miss. There were occasional moments when the functionality worked well. I asked Google to “play There Will Be Blood” and it correctly pulled up the film’s Google Play Movies & TV listing, with an option to either rent or buy the film from Google. Unfortunately, it then wasn’t able to recognize a voice command when I asked to rent the movie, so I had to resort to using my remote for the final steps in the process. It was a similar story on YouTube. Simple requests to play a channel’s most recent video worked, but attempting to do anything more complicated was unreliable, and I was better off just using the remote.

Step outside of Google’s own apps, and things got even more limited. Asking to play something on Netflix, for example, would often leave me stuck on the profile-selection screen, forcing me to pick up a remote to log in. Other times it would open on whichever previous show’s page I was using, rather than opening the specific content I wanted to watch. I could then use my voice to navigate to the page for a specific show, but the process often felt like it took one too many steps.

Suffice it to say, I didn’t find it feasible to use voice commands for the majority of my interaction with the soundbar. 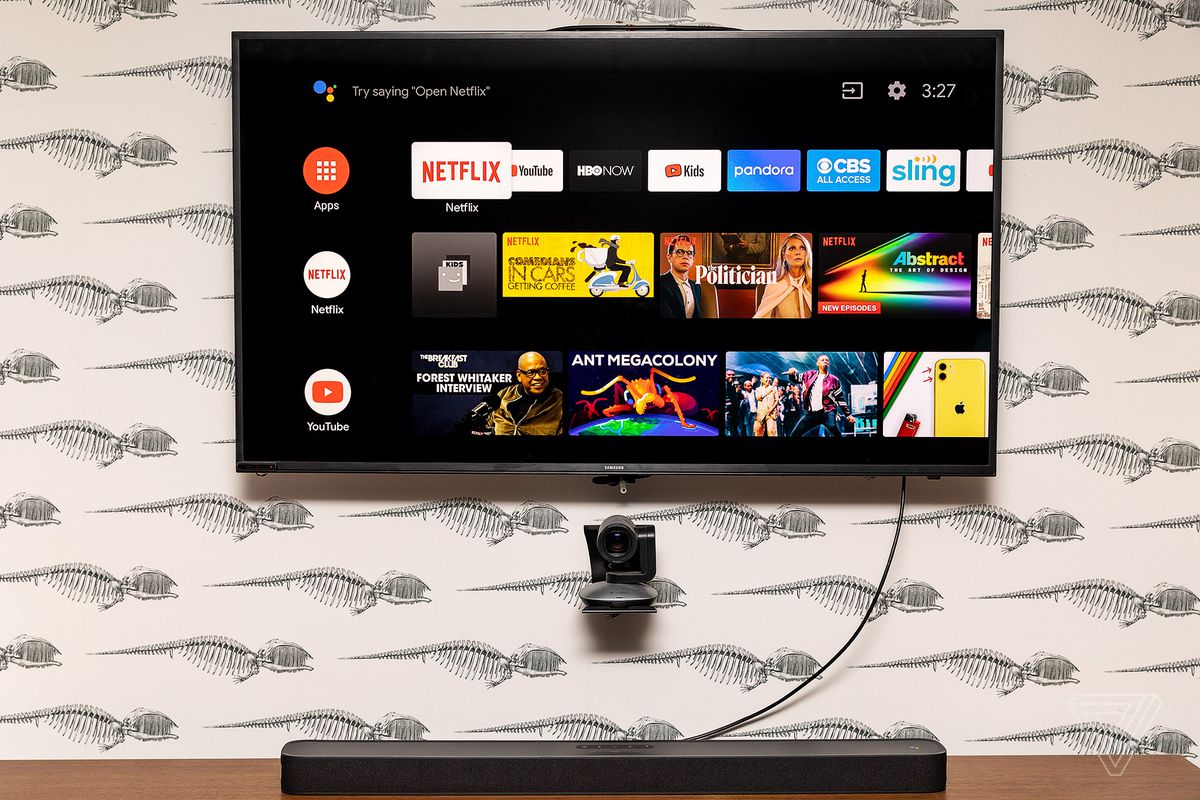 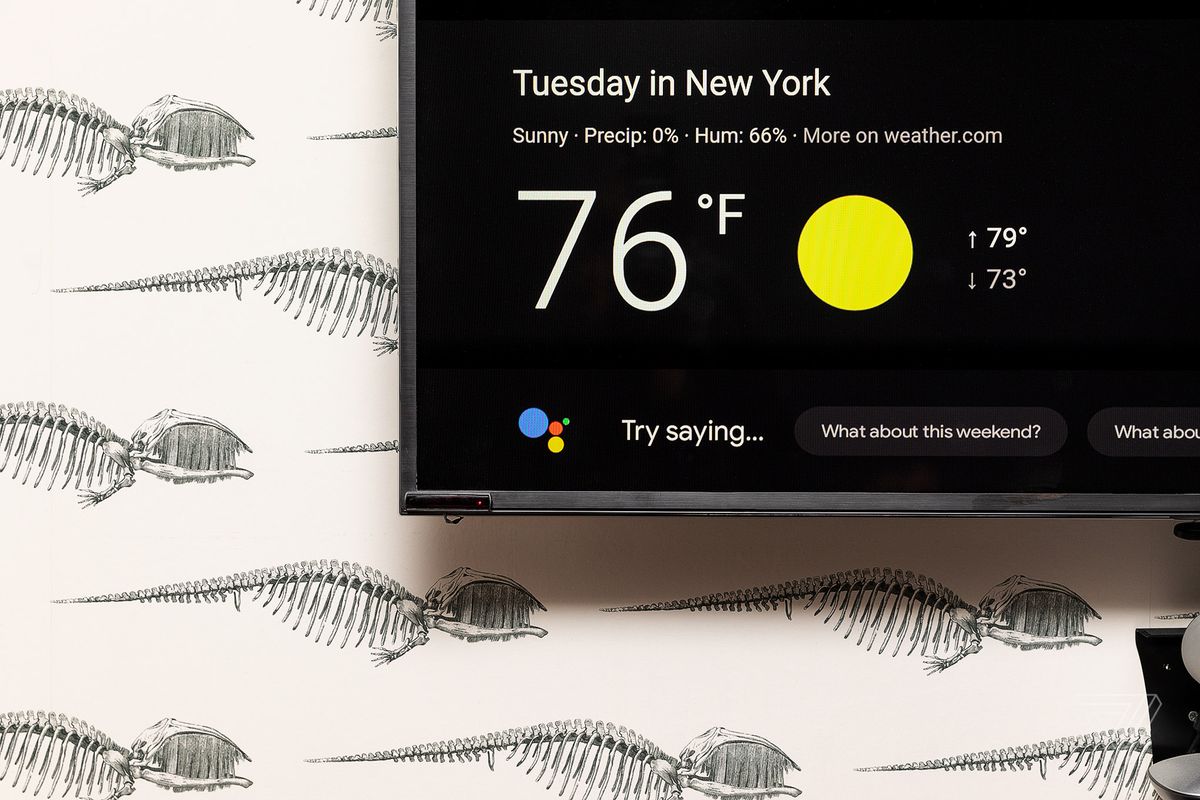 The app selection on the JBL Link Bar varies a lot based on where you’re located. In the US, it’s full-featured. Amazon Prime Video is missing, but otherwise the soundbar has popular apps like Netflix, Hulu, HBO Now, HBO Go, Showtime, CBS All Access, Vudu, and Sling TV. However, in the UK where I’m located, it’s a very different story. There’s no Now TV, BBC iPlayer, or Channel 4’s All 4 streaming service. Despite encouraging me to install the ITV Hub as I was setting up the soundbar, attempting to open the app generated an error saying that the necessary rights had not been secured to allow the app to run. Re-installing didn’t fix the issue. JBL tells me that it’s waiting to receive a license to be able to offer this app, but didn’t offer any information about when this might happen.

Theoretically, there are a couple of workarounds for this issue. If these apps are available as built-in software for your TV, then you should be able to run them there and have your TV output its audio to the soundbar via its HDMI Audio Return Channel (which the Link Bar’s setup process encourages you to connect with the soundbar). However, in my testing, it was hard to get this functionality to work. Sound would either come out of the TV’s speakers, or the TV would say that it was outputting sound via the soundbar while the soundbar remained completely silent. I managed to get it to work once, but I’ve not been able to replicate this since.

Of course, you could also get access to additional apps by plugging a second streaming device into one of the soundbar’s rear HDMI inputs. Doing so seems to miss the point of the JBL Link Bar, but it should work. 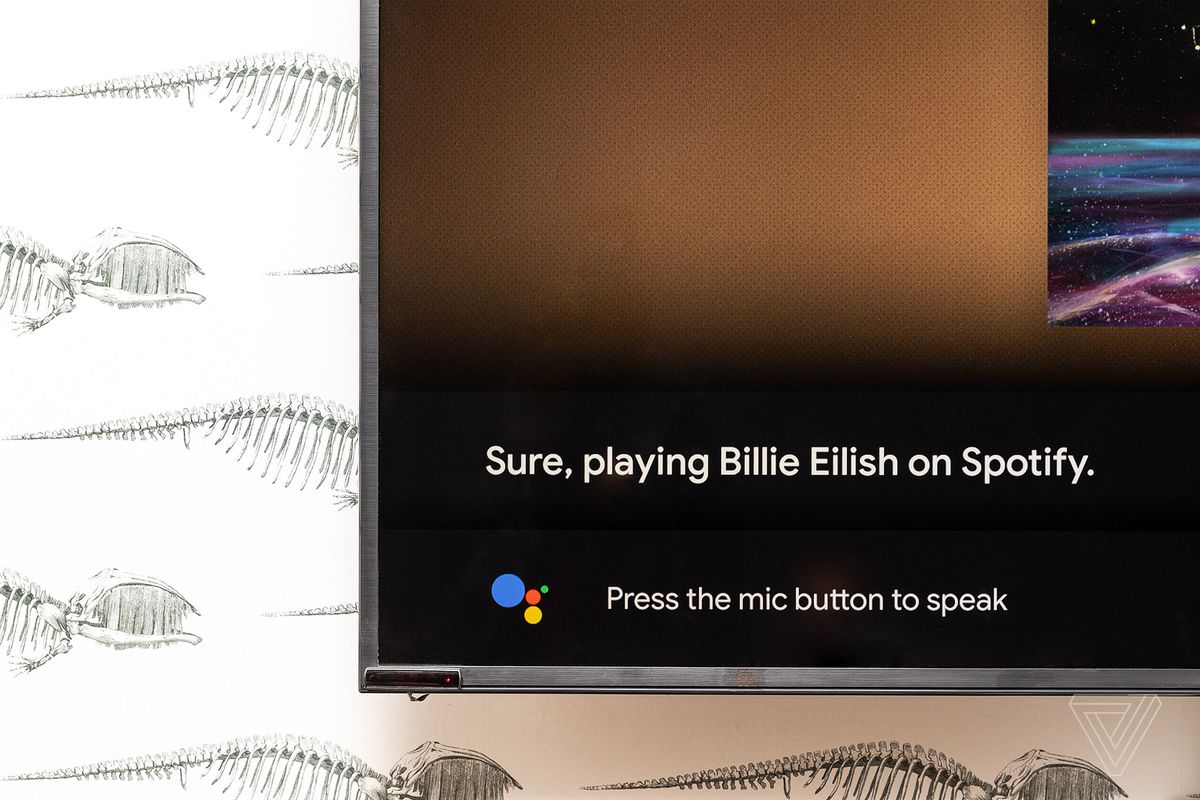 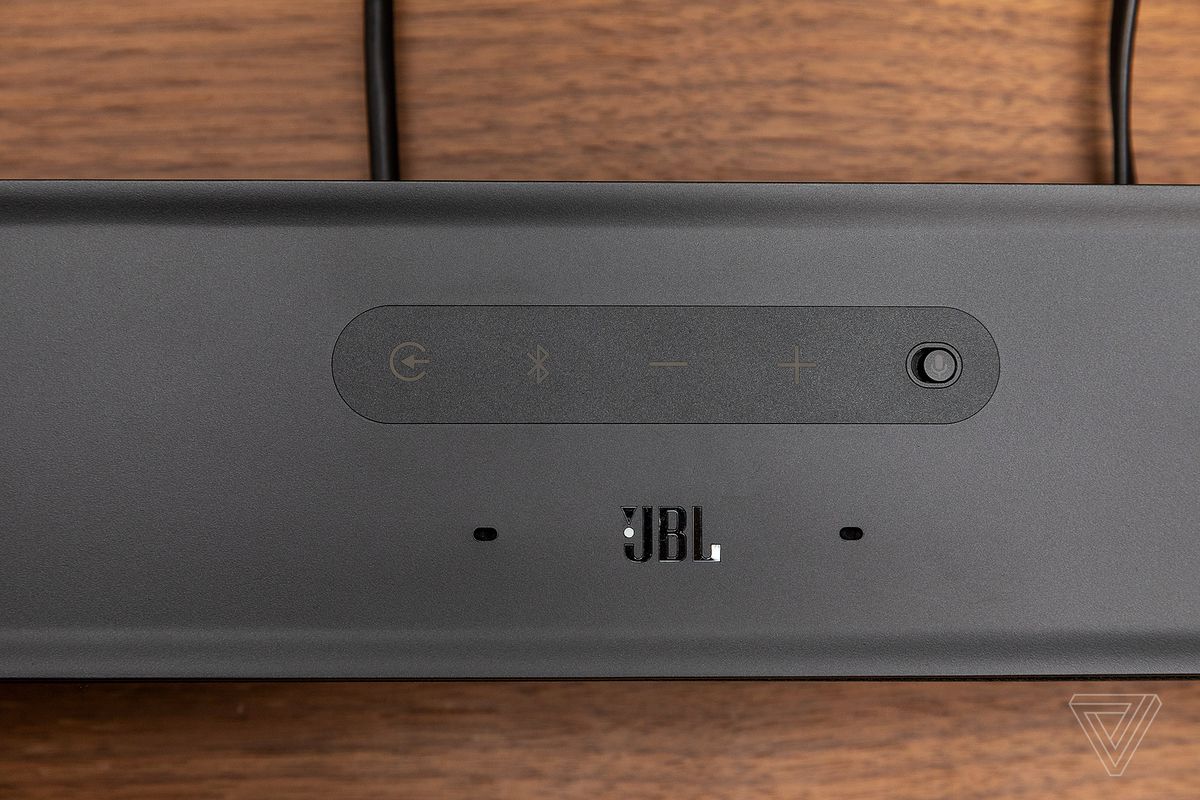 The second workaround is to use these streaming apps on your phone, and then use Google Chromecast to stream them to the soundbar. However, the user experience here is far worse than being able to control the apps natively on your TV. You can use the Link Bar’s remote to play and pause your video content like usual, but you’ll need to use your phone for everything else, and the whole experience can be inconsistent. On some occasions, I wasn’t able to get the app to make a successful Chromecast connection to the soundbar at all.

All of these issues are a real shame, because at its core the JBL Link Bar offers a modest improvement over the sound quality of your TV’s built-in speakers. When I used the soundbar to provide audio for Mario Kart 8 Deluxe on the Nintendo Switch, its audio added a satisfying rumble to the game that had weight and punch to it. I did find that the out-of-the-box settings erred a touch too much on the bass-y side, but this was easily remedied by adjusting the soundbar’s EQ settings to set its bass level down to “-2.” 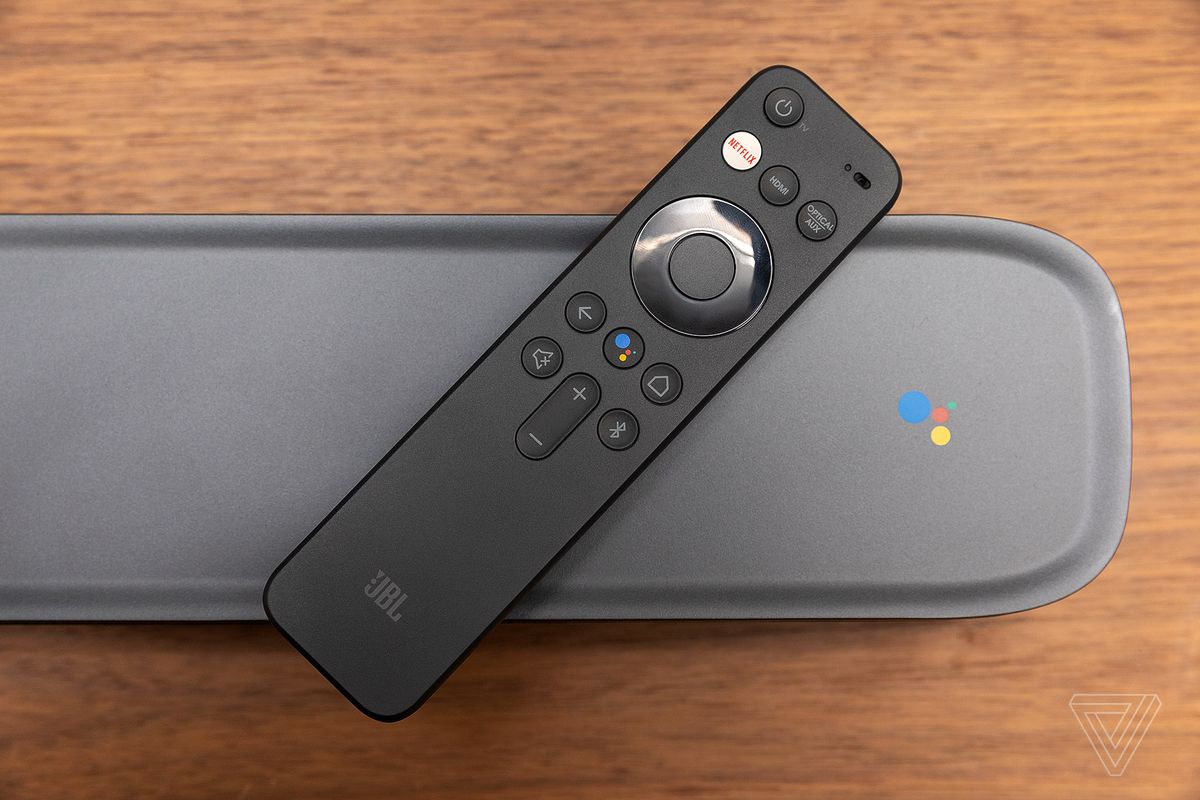 It was a similar story when watching There Will Be Blood, which features Jonny Greenwood’s exceptionally haunting soundtrack. Again, the soundbar was able to handle the film with heft, filling my room with sound without overwhelming the film’s dialogue. That said, at times the soundbar felt like it had the sound signature of a big Bluetooth speaker rather than a home cinema device. When I played a track by Three Trapped Tigers, the bass overwhelmed the sound stage slightly, preventing every part of each track from standing out.

The JBL Link Bar tries to combine three devices into one, but all three have different issues. As a Google Assistant smart speaker, it’s laggy and slow, it turns on your TV when you just want to listen to music, and it can be hard to use your voice to navigate video content. As a streaming box, it has a limited selection of streaming apps in the UK. Even used purely as a soundbar, it’s difficult to get audio to output from your TV’s built-in apps to the soundbar over HDMI-ARC, meaning you’re more or less restricted to relying on the soundbar’s own apps and devices that are plugged directly into it.

The JBL Link Bar is an ambitious device, but its different elements never manage to come together into a satisfying whole. In most cases, you’d be much better served by buying three separate devices with more limited, but better realized, functionality. The JBL Link Bar aims high, but whether it’s due to the limitations of Google Assistant, HDMI-CEC, or the soundbar’s hardware itself, it fails to deliver on its lofty promises.

Hacker Recycles Data on Half a Billion Facebook Users