Austrumi Linux is an unusual distribution. With a little more polish, it could be a good tool for running the Linux operating system on any computer you touch without changing anything on the hard drive.

Last updated on Oct. 3 to version 4.08, Austrumi Linux is a bootable live Linux distribution based on Slackware Linux. It was created and is maintained by a group of programmers from the Latgale region of Latvia.

One of the things that makes Austrumi so interesting is its desktop — FVWM, or Feeble Virtual Window Manager. FVWM does not dictate how the user’s desktop should work or what it should look like. Instead, it provides the mechanisms to configure the desktop to work, look and behave the way the user wants it to. 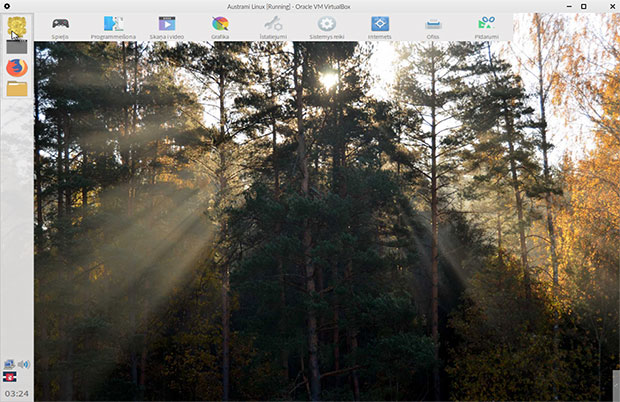 The FVWM environment provides a basic desktop display that does not get in the way.

Another thing that kept me tinkering with this distro all week is Austrumi’s ability to run fast and reliably with very limited system resources. Add to that its unique performance: The entire operating system and all of the applications run from RAM, making Austrumi a fast portable OS that lets you remove the boot medium — either DVD or USB — after the operating system starts.

Running an OS in RAM is a rarity for most Linux distributions. A few well-known Linux distros have that feature, but Austrumi has the added advantage of allowing users to choose options at each bootup with absolutely no special setup required for use.

Its out-of-the-box performance somewhat makes up for the lack of design polish. The biggest flaw is the incompleteness of its English language displays.

Otherwise, Austrumi Linux is a handy, all-purpose Linux OS. It can be an instant fix for data rescue and is credited as being among the fastest Linux distributions with 3D support for ATI, Nvidia and Intel video cards.

This distro contains all the necessary basic programs for work and entertainment. It boots from CD, flash drive or a hard drive installation and can be used on servers and workstations.

I am an endless distro-hopper thanks to nearly two decades spent reviewing the progress of literally hundreds of Linux operating systems and related software. I learned through thousands of hours evaluating new and old Linux products that the great variety in desktop environments and usability are two essential elements that make or break user responsiveness to any distribution.

Veteran users with a technical background love to get into the Linux weeds. They love to use the terminal window to dig deeply into the inner workings of the operating system. Typical Linux users tend to gravitate to Linux options that give you an efficient computing platform without a steep learning curve.

Austrumi Linux is not well known, but it checks most of the usability boxes. The only technical requirement is the ability to burn the ISO to a DVD or USB. That is a given for any Linux operating system installation. Beyond that process, just turn on the computer and use Austrumi. No installation is needed. Nor is there any need for system configurations.

The FVWM environment is a joy to use. I have not seen this window manager-based desktop environment prior to my hands-on introduction to Austumi Linux. It is one of the easiest and most intuitive I have used.

FVWM is clean and simple. It has four virtual workspaces built into the OS. It offers basic displays and menus.

Despite the ease-of-use built into Austrumi Linux, the interface is marred by a mixed language display. The fault lies with how the developers treated the localization component.

Language, not technology, is the weak link in this distro. If your native language is Latvian (mine is not), this distro is no doubt a five-star prize. The interface also offers English, Russian and Greek languages at the click of a flag icon in the panel bar.

However, Austrumi does an incomplete job of fully displaying all text in English. Most of the applications show this flaw slightly. The desktop displays and menus, however, are major offenders.

I have to assume that this weakness pervades the Russian and Greek language integration as well. This localization issue is more prominent with English and non-European locales.

This extended weakness turned up when I tried to set the time on the clock display in the panel bar. The time zone entries are mostly in Europe. A few were in Brazil. Not a single North America time zone was available.

This limits the convenience factor, but it does not prevent using the distro.

Interface at a Glance

The FVWM environment provides a basic desktop display that does not get in the way. It is similar to using other really lightweight environments like Openbox and Xfce. However, FVWM is much less configurable.

A transparent vertical white panel bar sits along the left edge of the screen. It holds a few basic icons to indicate the status of the language connection and speaker volume and time display.

Open windows show a docking presence in the middle section of the panel bar. The top portion of the bar holds the launcher icons for the file manager, Firefox Web browser, terminal and main menu.

Hovering the mouse pointer on the main menu icon opens another panel bar across the top of the screen. Click on each of the nine category icons to drop down the contents list to launch the desired application.

Right-click anywhere on the screen to open a row of menus to access system tools and special applications. Some of these choices duplicate the contents of the main menu.

I was pleased with the ample collection of applications bundled in Austrumi Linux. Included is the LibreOffice suite version 6.3.2.2. Also included is an inventory of packages typically found in Slackware-based distros.

I found a list of 14 games, ranging from Solitaire varieties to IceBreaker and Sudoku, very tempting. I am not usually a fan of computer games, but this collection drew me in and consumed a few hours.

The more I ventured through the various software categories, however, the more annoyed I became over the consistent absence of English titles. Depending on the application, that remained a problem within the menus as well.

This distro needs only limited system resources. Requirements include an Intel-compatible Pentium 2 processor or later and at least 512 MB of RAM. You can stretch this minimal memory level by running the “boot:nocache” option if the computer has less than 512 MB RAM.

No hard drive is needed, but you can find in the system menu an installation tool to place Austrumi Linux on the hard drive or a bootable USB drive. You also can run a live session directly from a bootable DVD if your system has an optical drive.

Other than the lack of adequate English language support within this distro, the only other significant design weakness is the lack of persistent memory if you run the OS without a hard drive installation. This means you can not save personal data and system configurations for your applications.

You can use a USB drive or cloud storage to save personal data. If you use Austrumi Linux as a portable OS, those two storage solutions will be in play anyway.

Austrumi is clearly not targeting non-European users. If developers fixed the language support for non-Latvian speakers, it could be much more convenient to use. Expanding support for other global regions is a critical need for this otherwise very handy performer.

Acer Swift 5 (late 2019) review: light on your back, lighter on your wallet

Cisco and the Importance of Empathy in a Technology Vendor