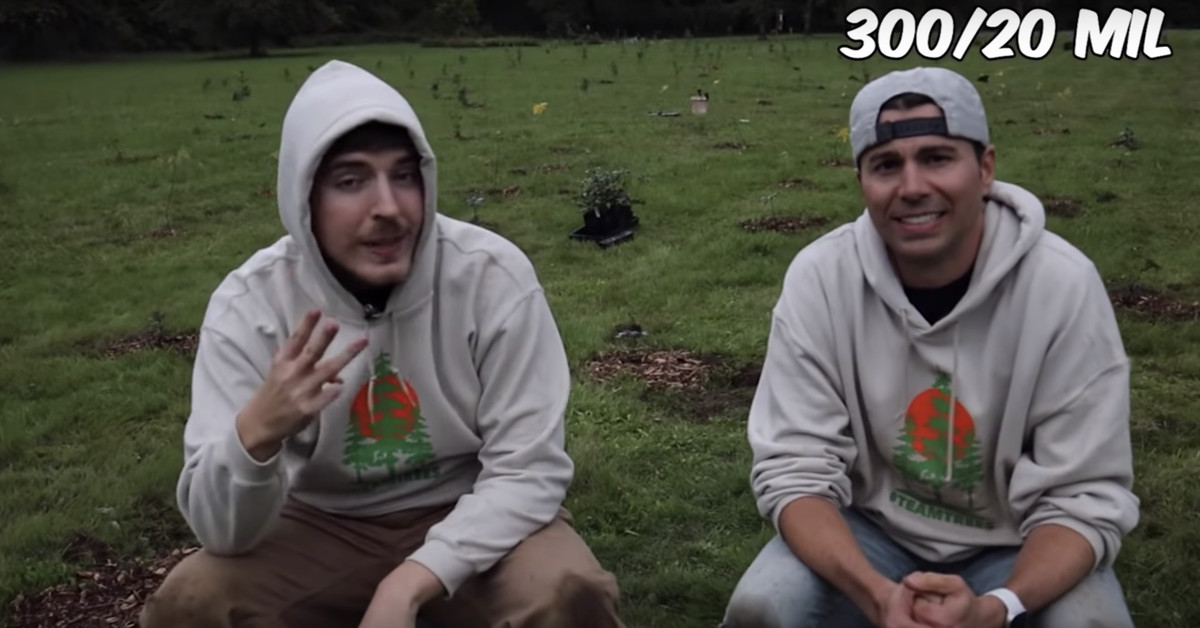 YouTubers are on a mission to plant 20 million trees. Hundreds of YouTubers are calling on their audiences today to donate money to the nonprofit Arbor Day Foundation, with every dollar raised turning into a tree seedling in the ground. “We want to show that YouTube isn’t just a drama fest, that we actually have real influence and can make real change,” Jimmy Donaldson, who goes by MrBeast on YouTube and started the campaign dubbed #TeamTrees, said in a private video seen by The Verge.

For any big tree-planting scheme, whether those seedlings can live to change the world is a little more complicated. Planting trees can have huge benefits for the ecosystem and the planet, reviving downed forests and helping to fight climate change by capturing the carbon we release when we burn fossil fuels. But to do so, large-scale tree-planting projects need to avoid potential pitfalls.

Nearly half of the world’s trees have been destroyed since the start of human civilization, one study in the journal Nature found. Between 1990 and 2016 alone, humans took down an area of forest larger than the country of South Africa, according to the World Bank. So there’s a lot of work to be done to not only protect remaining forests, but to bring them back to their former glory.

MrBeast set out to plant 20 million trees to commemorate his channel reaching 20 million subscribers. Tree planting projects can be attractive because of how easy it is to quantify how much good you’re doing by simply counting the number of trees you stick in the ground, and one of #TeamTrees’ aims, according to an FAQ for participants, is to take action on climate change. But if that’s the impact it’s going after, the more important tally might be how many of those trees actually live into old age.

“It turns out that many of these seedlings, if you don’t do this well or if people do it who don’t really care about those trees, then they all just die quickly“ says, Eike Lüdeling, department head of horticultural sciences at the University of Bonn. “Sometimes it’s probably a better idea to plant fewer trees and really take care of them.”

Long-term survival is key for trees because for them to be able to offset the greenhouse gas emissions humans generate, they need to live for at least 100 years — roughly the amount of time that the carbon they capture would have stuck around in the atmosphere. Protecting those trees for the next century can be pretty precarious in the midst of political wrangling, like we’re seeing in the Amazon rainforest and as climate change intensifies wildfires in the US.

Some of the money that #TeamTrees garners will go toward maintaining the trees planted. “We’re just not planting and walking away,” Arbor Day Foundation director of public relations Danny Cohn tells The Verge. The foundation has a vetting process requiring that the partners they work with to plant the trees have a plan to help them thrive. The organization tells The Verge that it’s not sure what the survival rate is for its trees since the foundation itself does not do the planting. But they say the US Forest Service, which it partners with, estimates a 3 percent mortality rate per year. Arbor Day planted 6.7 million trees in 2018, including 1.6 million in places like California and Oregon where forests were devastated by wildfires.

“We’re just not planting and walking away”

“[#TeamTrees] can be one of the craziest things that YouTube has ever seen, just so many people — we can end up with too many trees,” YouTuber Gavin Free, of The Slow Mo Guys, says in an early video circulated to get more people on board with the campaign. It turns out there can be too many trees, at least if they’re in the wrong places.

“No one opposes forest restoration in places that used to be forest and where people are trying to use native species to reestablish a forest once lost,” explains Joseph Veldman, assistant professor at Texas A&M University. But that’s not always what takes place. Sometimes environments that are rich in biodiversity but low on trees, like grasslands and savannas, can get targeted as a good place to plant trees where they never belonged in the first place. “Few people realize that planting trees in the wrong places can actually damage ecosystems, increase wildfire intensity and exacerbate global warming.”

“planting trees in the wrong places can actually damage ecosystems”

The Arbor Day Foundation says it partners with agencies like the US Forest Service, the National Park Service, and the National Association of State Foresters to ensure that they’re planting trees responsibly. “That’s the first thing: right tree, right place,” Cohn says. “People are very concerned about invasive species, and we are very concerned about that as well.”

Drama over how effective planting trees is when it comes to saving the world from climate change has played out in the journal Science since July. That’s when researchers from Crowther Lab in Zurich published a paper finding that restoring forests could capture two-thirds of the planet-warming greenhouse gases humans have unleashed on the atmosphere since the Industrial Revolution. That’s a big claim and it garnered a big reaction from others concerned that the study included places where trees shouldn’t or won’t grow, and overestimated how much carbon they can actually capture.

Four different groups of scientists (including Lüdeling and Veldman) responded with their critiques, and one of their big concerns is that placing too much attention on tree planting takes away from the most important step to stopping a climate catastrophe: cutting down on burning fossil fuels. Crowther Lab declined to comment on their study, but published their own response to critiques in Science.

“You have to cut emissions, there’s just no way around it”

“You have to cut emissions, there’s just no way around it and planting trees is not going to be our solution for this,” Lüdeling says. YouTube itself might want to pay attention to that, since another study found that by simply turning off images in videos that users only listen to, YouTube could cut down greenhouse emissions equivalent to axing the carbon footprint of 30,000 homes in the UK each year.

“We know that 20 million trees isn’t going to cure climate change, but the point here is to end this decade on a super strong note,” YouTuber Mark Rober says in the promotional campaign video. “It’s a constructive way to send a message to the politicians, ‘it’s freaking time to do something about climate change.’ Plus we just really love trees so this is like a fist pump to mother Earth.”

All the money donated will be given to the nonprofit Arbor Day Foundation, which has planted 250 million trees across the world over the past four-plus decades. Earlier this year, they launched another initiative to plant 100 million more trees by 2022, which will mark the 150th anniversary of the first Arbor Day tree planting holiday.