It can be difficult to find time to finish a video game, especially if you only have a few hours a week to play. In our biweekly column Short Play, we suggest video games that can be started and finished in a weekend.

A certain amount of frustration in a video game, especially a puzzle game, can be a good thing. Depending on how it’s utilized, it can help to create much more exhilarating moments of success when things finally click together and you understand the solution to the puzzle in front of you. Kine, in its best moments, has that sort of good frustration, but those moments also feel impeded by the game’s camera. Yet, it’s still great despite that.

In the simplest terms, Kine is a puzzle game in which you try to move a block through a maze to a specific point. The block moves one space at a time by rotating. Say the block is a cube and the side facing up is red while the rest of it is white. In order for the block to move to the right, it tilts to the right until it lands in the space, putting the red face on the right side of the cube rather than the top. If it moves one more space to the right, that red face would now be on the bottom. What complicates your movement through the maze, though, is that you are attempting to navigate through it with things that take up more than one space. On top of that, they can change their shape. (If you’re finding that hard to follow, check out the trailer below.)

The first one of these things you control is an accordion because Kine actually tells the story of a trio of musicians getting together to form a band. Each one is represented by a different instrument that you use to navigate the game’s mazes. Initially, the accordion can either be a single-space block or expand an additional two spaces. When expanded, it still rotates around the original block, so if you try to rotate it in such a way that it hits something, it’ll prevent you from making that move. However, if you get the accordion facing up and then expand it, this lifts the original block off the ground, letting you traverse gaps as that block is able to fall past them.

While perhaps complicated to picture from words alone, this is all nicely explained in the opening levels of the game. It feels less like running through a tutorial and more like just playing the game and learning what you need as the solution to the puzzle. This design is also carried out through the rest of the game when you’re introduced to the other two instruments that are controlled differently than the accordion. It’s especially helpful when you enter levels with more than one instrument at the same time in them.

The levels with more than one instrument are when Kine is at its best. You have to find ways for the instruments to help move or act as platforms for the others in order for one to get to the stage’s end space. This also nicely ties into the story of these musicians playing together and cooperating to create great music. These stages also tend to involve more three-dimensionality. Whereas earlier stages take place at the same level, these involve the instruments at various heights and taking advantage of their abilities to expand and contract in different ways to navigate the maze. 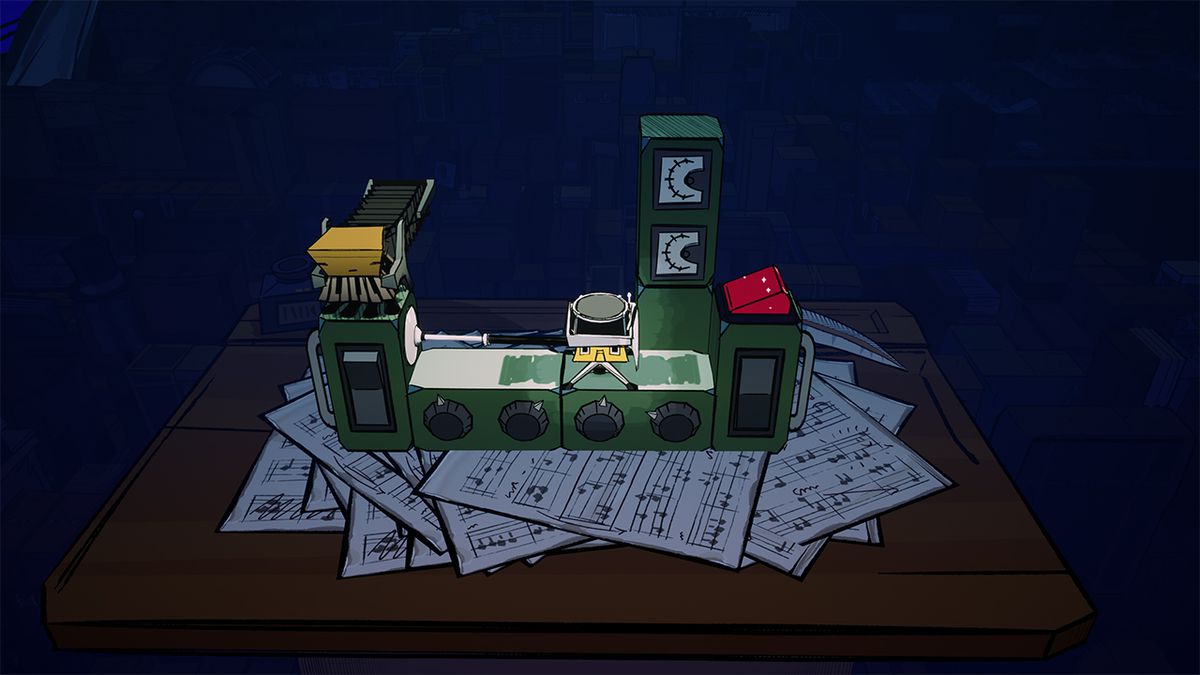 Unfortunately, it is also here where things get frustrating because, as the game becomes more three-dimensional, it also becomes increasingly difficult to see what you are supposed to be doing. There are buttons that rotate the camera 90 degrees left or right, letting you see various angles, and you can sort of position the camera in between, though it will quickly try to lock its view of the stage in such a way that everything looks square. This makes it clear for the player that when they want to move left, they know exactly what direction that is, regardless of where the camera is. This also often makes it difficult to understand exactly how a level is laid out and how you need to navigate it.

Despite the frustrating camera, these sequences feature the game’s best puzzles as they start to combine the different movements and mechanics of the trio into stages that are not only clever, but give you the feeling of cooperation between these three instruments as they play together. It is in these moments when Kine is exceptional: it uses the interdependence of the instruments in the puzzle-solving as a metaphor for the band playing music together.

Kine was created by Gwen Frey. You can get it for $19.99 on the Playstation 4, Xbox One, Nintendo Switch, or Windows (Epic Game Store). It takes about three to four hours to finish.

Star Wars: Alphabet Squadron is a thrilling examination of the cost...