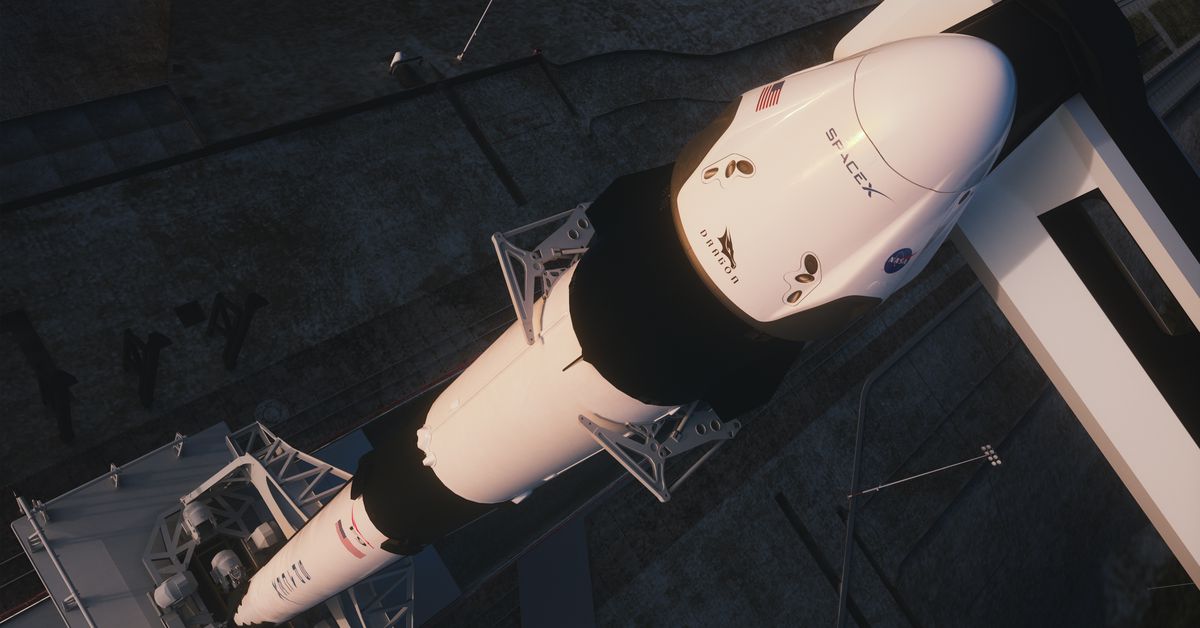 Early Saturday morning, SpaceX plans to launch a Falcon 9 rocket from Florida that will most likely break apart in midair just a few minutes after takeoff. The rocket’s demise is part of a planned test flight that’s supposed to demonstrate SpaceX’s ability to handle a catastrophic failure of one of its vehicles. If the test goes well, SpaceX will be closer than ever to putting people on its Falcon 9 rocket for the first time this year.

Known as the in-flight abort test, this is one of the last major milestones that SpaceX must meet as part of NASA’s Commercial Crew program. It’s a government initiative aimed at developing new American-made spacecraft to launch NASA astronauts from the US once again. For the last six years, SpaceX has been developing a new capsule called the Crew Dragon for the program, designed to fly on top of the company’s Falcon 9 rocket and transport NASA astronauts to and from the International Space Station. As part of the development process, SpaceX has had to do a number of demonstrations to show that its vehicle is both safe and capable of doing the job.

Saturday’s test is all about showcasing SpaceX’s backup plan in the rare event that a trip to the ISS starts to go south. Let’s say one of SpaceX’s Falcon 9 rockets starts to break apart during the ascent to space. NASA wants to know that its astronauts riding inside the Crew Dragon can still be brought home safely, despite a malfunctioning rocket.

To save passengers during an emergency, SpaceX designed its Crew Dragon with an escape system. Embedded within the outer hull of the capsule are eight thrusters, called SuperDraco engines. If some kind of issue arises during flight, it will trigger the thrusters to fire. The engines will then carry the Crew Dragon up and away from the dangerous rocket. Once the capsule is far enough away, the Crew Dragon will deploy its four parachutes, and lower itself down gently into the Atlantic Ocean, where the crew will await rescue.

SpaceX has tested its emergency thrusters before, but this will be the first time the company tries the entire escape process midflight. About a minute and a half after the Falcon 9 launches, the Crew Dragon’s SuperDraco engines will fire and the capsule will separate from the rocket. At the same time, the Falcon 9’s main engines will stop firing, and the rocket will eventually fall back to Earth. As the Crew Dragon attempts a gentle landing in the ocean, the Falcon 9 will be torn apart as it descends into the water. The timing of the breakup depends on how windy it is on Saturday, as well as other factors like the rocket’s position, according to NASA. SpaceX has assembled a team of people to recover the debris from the rocket when the test is over. The Falcon 9 that’s meeting its end has already been to space and back three times before, making this fourth trip its last.

All in all, it could provide for a spectacular show on the ground for those in Cape Canaveral, Florida, where the test is taking place. At a minute and a half after launch, the Falcon 9 won’t terribly far from its launch site at NASA’s Kennedy Space Center, so it’s possible the rocket’s destruction will be seen by bystanders near the launch area. In fact, a popular beach that many attend to watch rockets launch from the Cape will be closed, due to the slightest concern that debris might land there.

Even though no people will be on board the Crew Dragon during this test, SpaceX will send its recovery boat to meet the capsule, just as it would if there was an actual emergency. SpaceX has its own boat with a helicopter landing pad, designed to recover the Crew Dragon whenever it lands in the ocean — either when it returns from the ISS normally or during an emergency scenario. The Air Force will also be helping SpaceX out with these recovery efforts.

NASA and SpaceX will be watching this test closely

NASA and SpaceX will be watching this test closely, especially since the emergency abort system on the Crew Dragon has been problematic in the past. In April, a test version of SpaceX’s Crew Dragon exploded in Florida during testing of the SuperDraco engines. The company had been igniting the engines in a series of burns, and a leaky valve caused a chain reaction of events that led the vehicle to burst apart. SpaceX investigated the failure for months and ultimately made a few design changes in the system. And in November, the company successfully fired up the SuperDracos on the Crew Dragon capsule set to fly on Saturday, showing that they worked as expected. Still, nerves will be high this weekend as both NASA and SpaceX witness how the system performs in a simulated emergency scenario.

If all goes well, then the next flight milestone for SpaceX is to put people on board the Crew Dragon. Two NASA astronauts, Bob Behnken and Doug Hurley, are slated to be the first passengers in the Crew Dragon, tasked with flying to the station for a quick, two-week stay. If that flight goes well, then NASA will eventually certify the Crew Dragon to do routine crewed flights to the ISS and back.

The schedule for that crewed flight hasn’t been nailed down yet, as there is still a lot of work to do once this in-flight abort test is complete. SpaceX CEO Elon Musk noted that the Crew Dragon that will carry Behnken and Hurley could arrive at Cape Canaveral in February, but that it could take a few more months to do all the necessary processing and tests before the astronauts can fly.

Figuring out the date of that crewed flight will be a major moment for both SpaceX and NASA. Since the retirement of the Space Shuttle in 2011, all of NASA’s astronauts have been flying on Russia’s Soyuz rocket to get to the ISS. The first crewed flight for the Commercial Crew program will return human spaceflight to American soil once again. Additionally, NASA astronauts have long launched on government-owned vehicles, but SpaceX’s Crew Dragon is a commercially developed spacecraft. When people ride on board, it may be the first time that a private capsule transports people to orbit.

If all goes well, then the next flight milestone for SpaceX is to put people on board

Of course, rival company Boeing might get there first. Boeing is also part of the Commercial Crew program and has been developing its own crew capsule called the CST-100 Starliner. That vehicle made its debut flight to space in December, though a glitch during the mission prevented the Starliner from reaching the space station like it was supposed to. It’s possible the company may have to do another uncrewed flight test because of the mishap. But even with the glitch, Boeing is also nearing its first crewed test which will carry two NASA astronauts and a Boeing astronaut to the station.

Which crewed mission happens first still depends on how schedules play out this year, and the Commercial Crew program is fairly notorious for delays. But both SpaceX and Boeing are closer than ever to flying people in their vehicles, and Saturday’s launch will be a big thing to remove from SpaceX’s to-do list.

The in-flight abort is scheduled to get underway at 8AM ET on Saturday, though SpaceX has a four-hour window to do the test. So far, weather is looking pretty great, with a 90 percent chance of good conditions. NASA plans to do a pre-launch briefing at 1PM ET on Friday, January 17th, with live coverage starting at 7:45AM ET. Check back then to see SpaceX’s Falcon 9 rocket get destroyed on purpose.