The current version of TROMjaro is as close as it gets to being a Manjaro clone. However, a much different philosophy gives users something more than the Manjaro distro itself offers.

The latest ISO release, issued Nov. 11, is labeled “version 11.11.2019” and is based on Manjaro 18.1.2 “Juhraya.” As such, TROMjaro is part of the Arch Linux family. However, thanks to TROMjaro’s frequent rolling release update schedule, the distro already has advanced beyond the features baked into the almost three-month old ISO.

TROMJaro offers a new twist on open source freedom in Linux. This relatively new distro is a custom-built version of the popular Manjaro Linux.

To Arch Linux devotees, Manjaro goes a few steps further in providing users with flexibility and convenience. It runs on a heavily tweaked design of the GNOME desktop. It also modifies some of the system offerings and software choices. 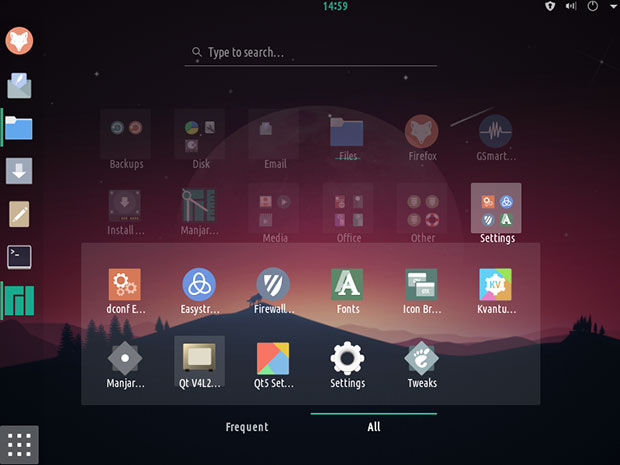 I discovered the TROMjaro distro last summer while looking for alternatives to Manjaro and more classic Arch Linux. I recently received a heads up from one of the distro’s developers letting me know that a newer release addressed some of the shortcomings in the previous releases.

Those changes warranted another look. TROMjaro is an unusual variation of Manjaro Linux. It reflects the TROMjaro community’s views on the concept of free software.

Manjaro — and by extension, TROMjaro Linux — offers the best of two worlds. It puts a user-friendlier face on an Arch-based distro. Manjaro also offers a choice of sensible and productive desktop interfaces. It runs KDE, Xfce and GNOME desktops. So far, though, TROMjaro has but one desktop: GNOME.

Using a distribution such as Manjaro or TROMjaro is not the same as using a pure Arch Linux descendant. Arch is geared toward more experienced or technically minded users.

Arch-based distros generally are beyond the reach of those who lack the technical expertise (or persistence) required to use it. If for no other reason, Arch Linux derivatives are monsters to install and configure.

Those processes require more than a passing knowledge of the command line interface. Manjaro and TROMjaro Linux are different in that regard.

TROMjaro first appeared as a beta version in December 2018, with two newer releases pushed out by last June. The developers late last year issued an upgrade that added spit and polish to the already-solid Linux OS.

The labeling within the OS did not show the “TROMjaro” name. Even the installer announced,”Welcome to Manjaro Linux.”

In this current release, the developers cleaned up the distribution a bit and enabled support for installing applications directly from tromjaro.com. The installation ISO includes little in the way of previous default applications.

The TROMjaro developers wanted to keep the ISO as minimal as possible and let users decide what applications to install on their system. So the developers kept only the basic and most functional apps that are crucial for the system, such as backups, settings and tweaks, and the like.

“We thought that since now it is super easy to install our recommended trade-free apps from the website, there is little use for us to install many applications by default,” Tio, who started the TROMjaro distro, told LinuxInsider. (Tio declined to identify himself or fellow developer team members other than by first names.)

I first wrote about TROMjaro Linux last summer. I had to chip away at what still is a veil of secrecy, it seems, around the TROMjaro community. As Tio explained, 10 or fewer helpers comprise his developer team. They have a variety of computer-related skill sets.

Some team members work in server security and management with Linux. A few others have used Arch Linux for 10 or more years. The rest test the OS code or translate content on the TROMjaro website.

The team’s work amounts to customizing, curating, and making custom changes when possible. The small dev team is successful because Manjaro and Arch communities already did most of the work, noted Tio.

The TROMjaro team is not in it for profit. The distro’s devs “make nothing out of TROMjaro except a few donations here and there that kind people help with,” Tio said.

Providing a better Linux operating system based on Manjaro Linux is one of two primary goals. The second one is tightly linked to spreading the trade-free philosophy of TROM.

As applied to the software industry, much so-called “free” software, such as Android and Google services, actually comes with a steep price. Users must surrender their personal information to feed the monetizing that developers impose to maintain cash flow.

TROMjaro is aligned with the goal of creating trade-free services. TROM is a global organization that showcases in detail what it claims is the root cause of most of today’s problems: the lack of a trade-free social structure. The TROM community behind the TROMjaro Linux distro asks nothing in return from anyone.

That means no data, money or even special attention is received in exchange for its services. That viewpoint apparently is embraced by the developers.

The TROM organization provides free educational materials and tools about the movement. It publishes books, videos, and a mixed bag of media tools to explain and track trade-free concepts around the globe.

Tio started a documentary in 2010 and published it in 2011 on tromsite.com — all 14 hours of it. To his surprise, his homemade documentary reached hundreds of thousands of people online.

“Quickly more and more people got to join my little project that then became bigger and bigger with us producing more videos, books, audiobooks, quizzes, curated news and videos, podcasts, and much more as you can see at Tromsite.com and its tools pages,” Tio said.

Tio migrated from Microsoft Windows to Ubuntu seven years ago. Along the way, he tried many Linux distros and increasingly became impressed with the OS options “so much so that I decided to customize Manjaro and make it into a new trade-free flavor — one that is purely free,” he added.

Tio started the distro to introduce another trade-free service for computer users. Also, he wanted a very easy-to-use distro with automatic backups as well as easy-to-install curated apps that are both easy to use and to configure.

The design resembles a blend of the former Unity desktop with the latest GNOME desktop features and more. The distro is attracting attention for its customized desktop design and default-enabled features for automated backups.

The collection of preinstalled apps is a popular feature. So are the hundreds of curated apps that are now available at the distro’s app center.

The tiny team of TROMjaro developers remains active in both the Manjaro Linux and Arch Linux communities, according to Tio.

“We help create icons for the Zafiro icon pack that we use. We test all of the apps we recommend and report bugs or submit feature requests at times, or help a bit here and there with fixing some of the bugs. We maintain several AUR (Arch User Repository) packages and so forth,” said Tio.

Trade-Free vs. Sort of Free

The trade-free concept is based on the idea that our worldwide monetary-based society creates misery, and that we can change it through automation and volunteers, Tio explained.

In simple terms, as the trade-free movement applies to the computer industry, it represents an alternative to the practice of using free software and online services in exchange for personal user information and corporate data.

Numerous Linux distros already provide an option for users to not install non-free software components. The TROMjaro community expands that solution by not leaving any such packages in its version of Manjaro.

This approach goes beyond the way most people view “free” open source software and technology. It also clarifies Tio’s reasons for starting the TROMjaro distro, and the software decisions that make it different from Manjaro Linux.

If you are familiar with the GNOME desktop, the display you see in TROMjaro basically looks the same. Differences will appear when you look a bit closer and move around the desktop. You will not find the Activities icon or launcher button for the right screen edge slide-out panel that displays the virtual desktops. Also gone are the hot corners and well-populated menus. There are lots more subtle tweaks.

You will find a much simpler approach to getting things done on the screen. For instance, the applications menu groups apps by categories in folders. Rows and columns of folders spread across the full screen. Click on a folder to display its contents as icons in a new row that pops up over folder rows. 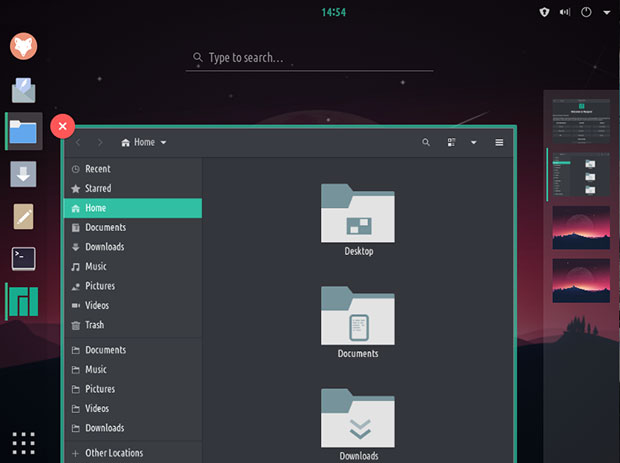 Firefox is the only installed Web browser. Earlier versions were tweaked to tighten security. The default setting opts out of sending data to Firefox. A few extensions are installed by default for privacy and better usability.

The current release removed some Firefox add-ons and added others. Now included are only the most basic Firefox add-ons that protect users from being forced to engage in online trades.

The devs block ads and trackers. Even better, they unlock scientific articles hidden behind paywalls.

If you want typical applications like LibreOffice and Web torrent, you soon will have to add them from the TROMjaro repository. The developers plan to remove them as part of an upcoming upgrade.

A few Gnome extensions have been removed. In the GNOME desktop, extensions add functionality that is not built into the default GNOME desktop upstream. To replace these removed extensions, the TROMjaro developers will start to curate or recommend them on the distro’s Web pages as part of the user choice philosophy.

Overall, the changes reduced the size of the ISO from 2.2 GB to 1.6 GB, according to Tio. The removal of software packages and some of the Manjaro branding clearly makes the TROMjaro distribution lighter.

For the next release, the developers plan to store the desktop settings in a much better manner, so the install configuration files (language, keyboard layout, location and hour) are not overwritten like they are now. More specific TROMjaro branding will be evident.

“We wanted to do both of these for this release, but we did not have the manpower to do them,” explained Tio.

TROMjaro is based on Arch Linux but is much simpler to install and maintain. That makes it a good computing platform to investigate.

While it is easier to install and use than most other Arch Linux-based distributions, users already familiar with how the Linux OS works will have a less challenging experience than newcomers to Linux migrating from macOS and Microsoft Windows.

The TROMjaro desktop has its own unique look and feel, and its own approach to handling software.

Existing TROMjaro users do not have to do anything special to update their systems if they installed an earlier ISO. Just update the TROM repository.

Follow these steps but do not include the quotation marks: