Specifically, this 14-inch laptop weighs just over two pounds. For context, it’s more than half a pound lighter than the 13.3-inch Macbook Air or the Dell XPS 13. It’s lighter than the 13.5-inch Surface Laptop 3. You’ll only find a few lighter 14-inch models on the market, including the LG Gram, the Lenovo Thinkpad X1 Carbon, and Acer’s own sub-two-pound Swift 7.

This is all to say: almost everything about the new Swift 5 is fine. The screen is fine, the performance is fine, the battery life is fine, and the price ($899.99 to start, $999.99 as tested) isn’t outrageous for the specs included. There’s not a ton to complain about here, but the Swift 5 isn’t top of its class in these categories. Where it stands out is portability — and compared to previous Swift models, it asks remarkably few sacrifices in exchange.

I’m used to 12- and 13-inch laptops feeling light, but I’m still in the process of convincing myself that a 14-inch device can actually be this weightless. Every time I pick this laptop up, I’m surprised it’s not heavier. I carry it around with one hand, and can’t tell that I’m holding it. When it’s in my backpack, I forget that it’s there. I’ve often found myself lifting it up and down at my desk to make sure it hasn’t somehow gained the extra weight my brain thinks it should have. 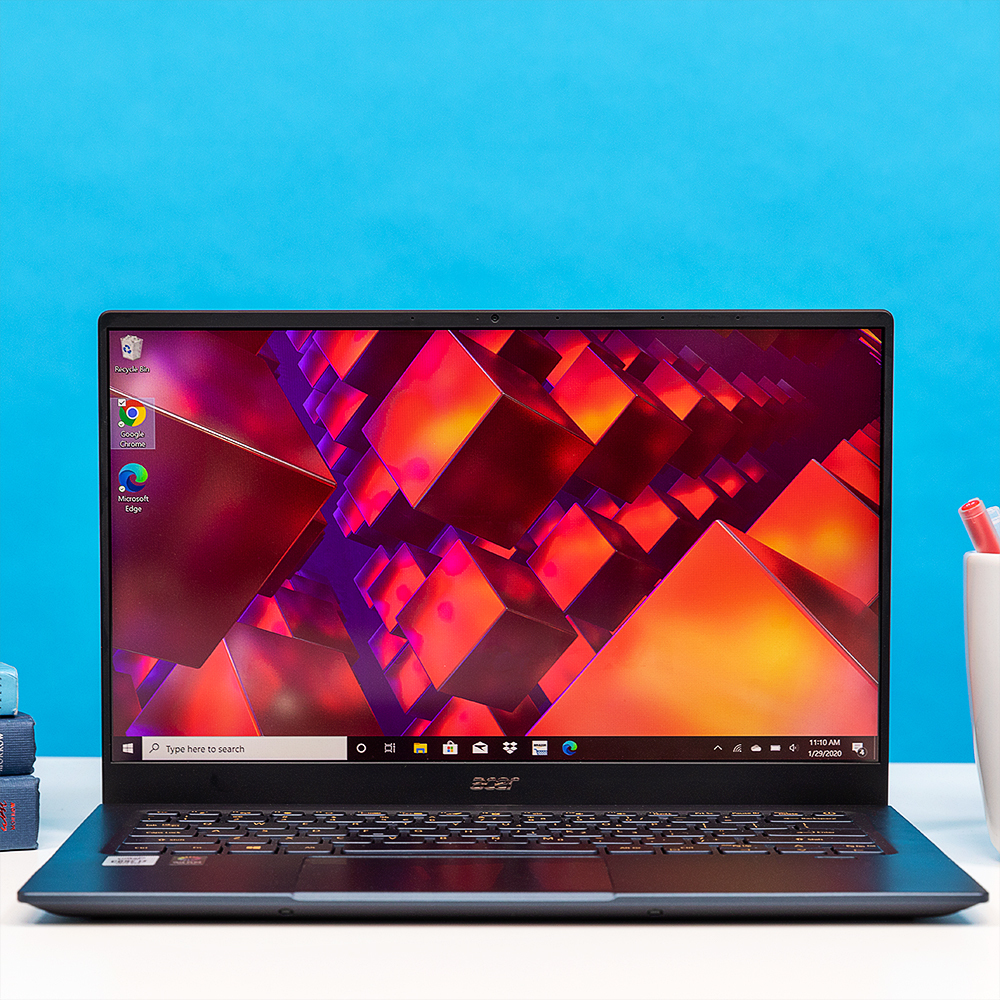 The late-2019 Swift 5 has certainly seen an aesthetic upgrade from the early-2019 15-inch Swift 5, which sported a design that Verge editor Chris Welch described as “soulless.” It was silver, barren, and totally bland.

There are a few new flourishes that make the 14-inch model look a little bit better. Gone is the gray: the new 14 has a sleeker hue that’s technically a dark blue, though it looks very black to me, and multiple Verge staffers passing by have insisted that it’s a dark green. The Acer logo and the hinge are both now gold, and they look subtly chic against the dark backdrop. (Unfortunately, the colored part of the hinge folds beneath the deck when the laptop is open, so it’s not visible most of the time.) 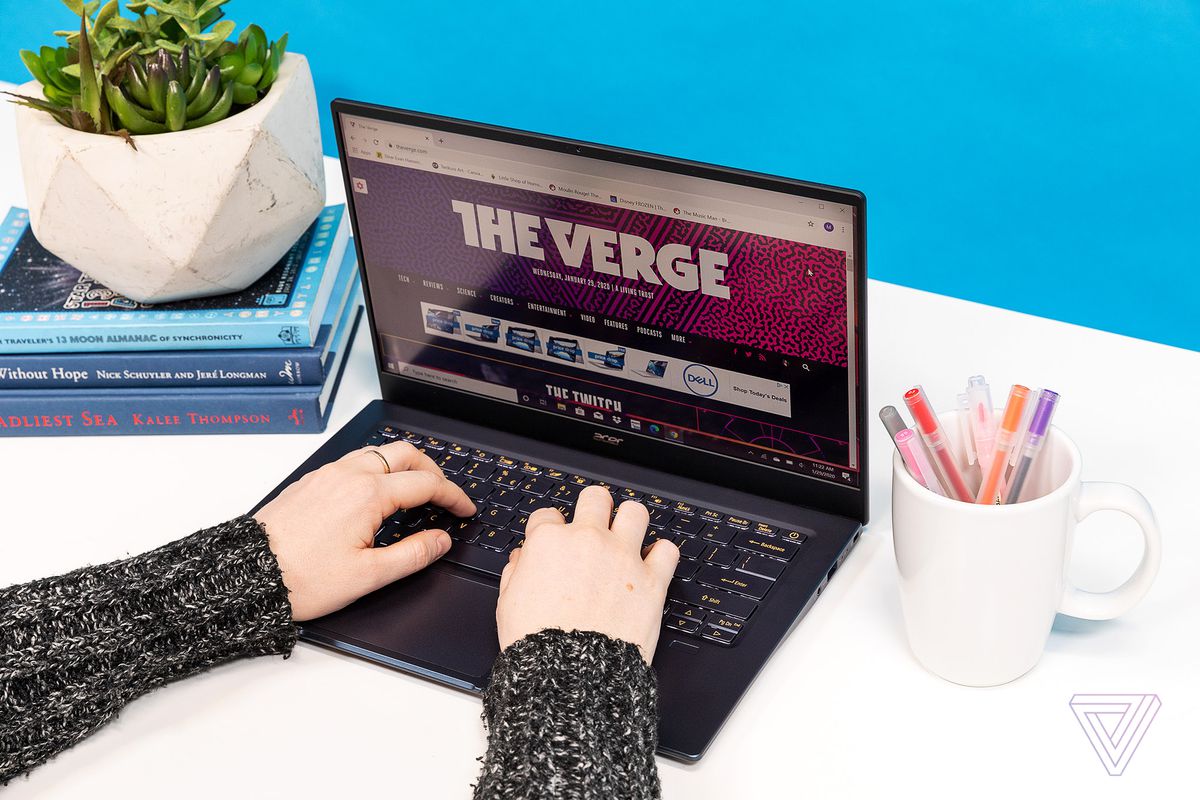 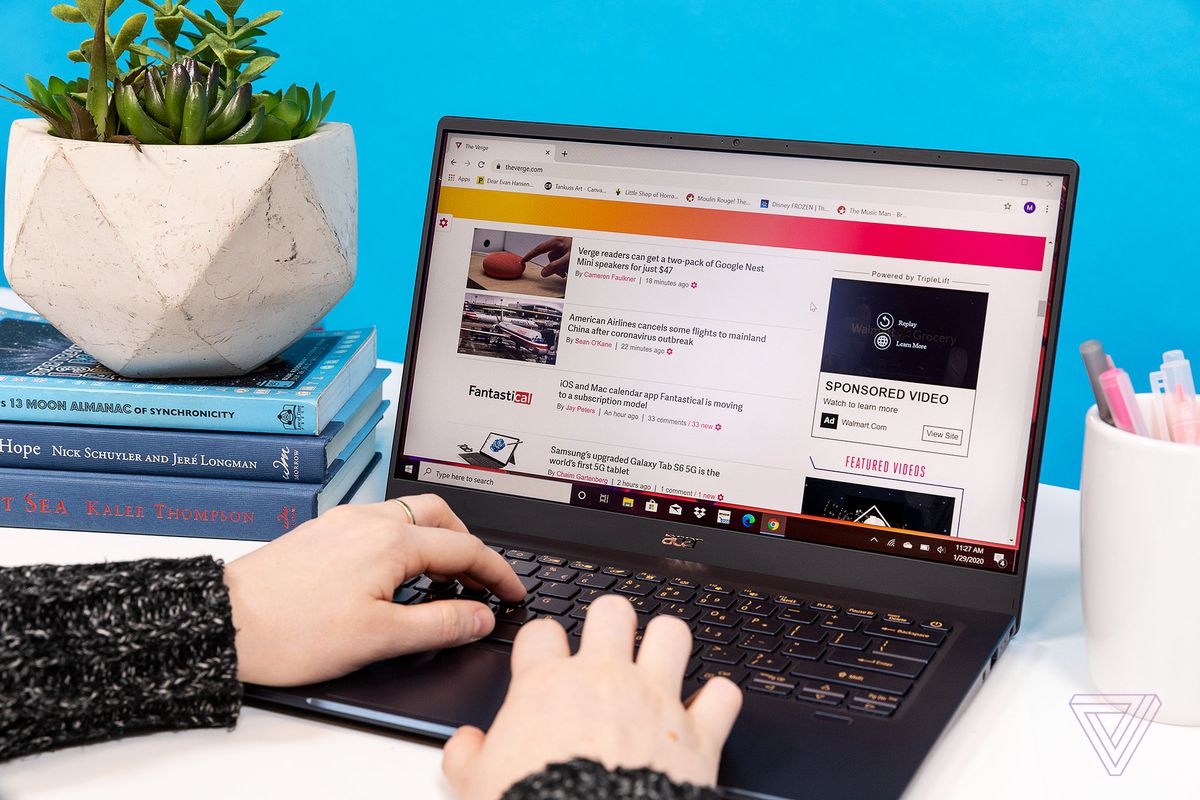 That said, as compact and powerful as this machine is, calling it an “ultrabook” doesn’t feel quite right. There’s no other way to say it: it just doesn’t feel premium. The chassis is made from what Acer calls “advanced alloys”; the top and bottom covers are made of magnesium-lithium, the palm rests magnesium-aluminum. They look and feel like cheap plastic. The keyboard flexes inward if you push on it with any sort of effort, and the screen is so flimsy that I have no doubt you could snap it easily.

Both materials also retain fingerprints like a sponge retains water. After one day with the Swift 5, the inside and outside were already covered in visible smudges.

Again, it’s not that the laptop is ugly — if you can stomach stubborn fingerprints, it’s fine. It just lacks the premium look and feel you might expect from a $1,000 machine.

It would be nice to see an SD card reader, but Thunderbolt 3 support, which was missing from the last Swift 5, is a welcome addition.

In another departure from the previous model, Acer has put a matte touchscreen on the new Swift 5. It’s a 1920 x 1080 IPS panel in a 16:9 aspect ratio with a maximum brightness of 300 nits, which is about what I’d expect for an ultrabook at this price, but lower than you’d get from an XPS 13 or MacBook Air. The 3.97mm bezels are noticeable (Acer is claiming an 86.4 percent screen-to-body ratio), but didn’t intrude on my experience. There’s still plenty of screen in this relatively small chassis.

The display looks good. Blacks are very black, even at maximum brightness, and colors are strong, though you won’t see the same vibrant detail as you will on a machine like the MacBook Pro. Creators may want a screen that gets a bit brighter, but this should suit everyday browsing and streaming just fine.

What’s really nice about the matte screen, though, is that it kicks back almost no glare. While watching the Game of Thrones episode “The Long Night” (you know, the frustratingly dark one) in a very bright room, I could make out most of the action and details. When watching the same episode on the glossy MacBook Pro, I could clearly see my reflection on the screen, which made it difficult to watch the episode, despite the richer picture.

The matte screen kicks back almost no glare

The panel is also plenty capable as a touchscreen; I never had trouble navigating or opening tabs. I also like the smooth feel of the matte surface, but some folks prefer the friction of a glossy screen.

One thing to note: the Swift 5’s screen, like its chassis, is a fingerprint hellscape. It was filthy after just a week of use, and no amount of wiping could clean it entirely. The screen is bright enough that the smudges aren’t visible head-on, but anyone looking from the side will notice them. 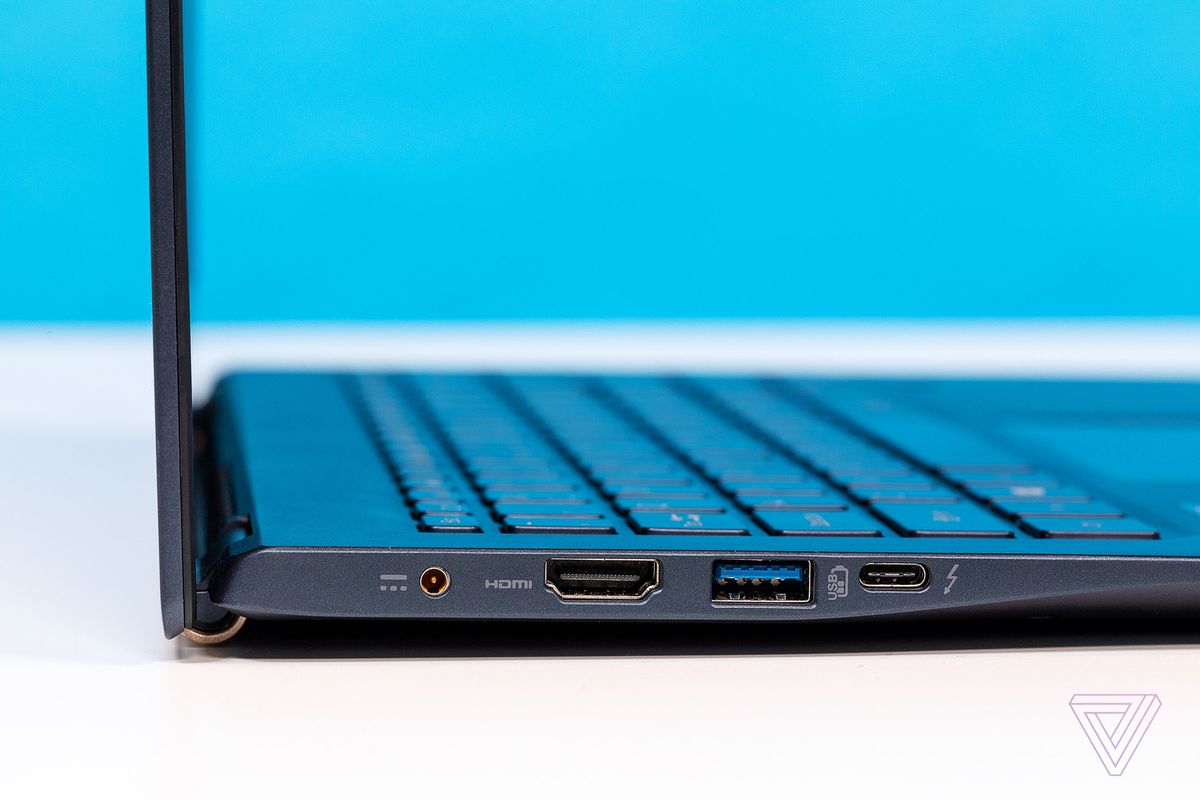 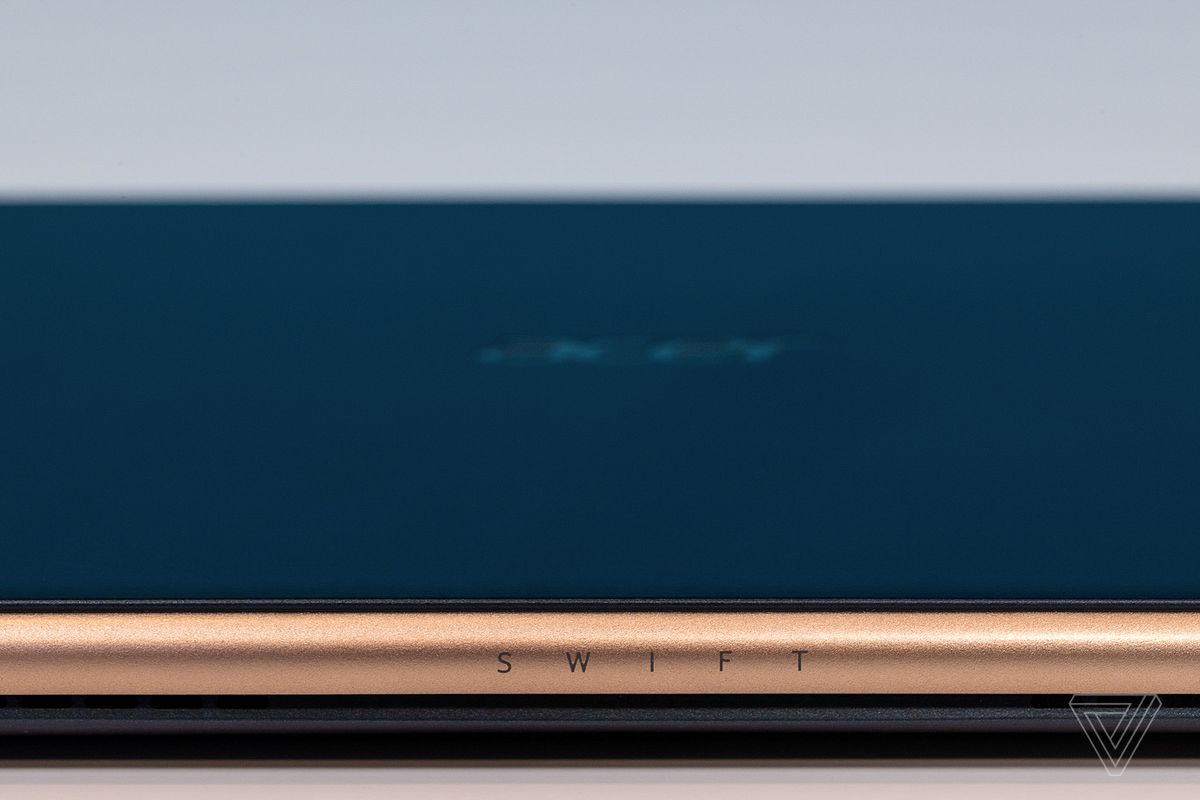 The Swift 5 has a 1280 x 720 front-facing camera, and it’s actually usable. That feels like a blessing, given that the Acer Swift 7’s webcam was crammed into a pop-out module on the left side of the keyboard deck, and could only photograph people’s fingers and chests.

The camera’s pictures are a bit grainy, but well lit. It technically supports HDR, but the only difference I noticed with HDR turned on was that my skin looked a bit whiter.

The camera’s pictures are a bit grainy, but well lit

Unfortunately, the webcam isn’t capable of Windows Hello face recognition. Fortunately, if you want to use Windows Hello, you can sign in with the Swift 5’s fingerprint reader, which is below the arrow keys.

We found the previous Swift 5’s fingerprint reader finicky, but this one is quite accurate; it took less than a minute to set up, registered my print correctly each time, and usually took between just 0.5 and 1.5 seconds to authenticate and log me in. Do note that you have to press moderately hard to get your fingerprint to register; you can’t just tap as you would on a smartphone.

The Swift 5’s keyboard is a bit flatter than my favorite keyboards, but it offers decent travel and a satisfying click, and it’s not super loud. I tended to score between 120 and 130 on typing tests, which is close to but a bit below my average speed.

As is often the case with compact machines, Acer had to get creative to cram all the keys in. None of the unorthodox placements would stop me from buying the laptop, but they were a bit of a nuisance. For example, the Page Up and Page Down buttons are located right above the identically sized left and right arrow keys, and I accidentally hit the former keys a few times when I meant to hit the latter. The power button, shaped just like a function key, is also right above Backspace, and I knocked that by accident on a couple occasions as well, which was even more of a hassle. I’ll also note that I have very small fingers; larger-handed folks may have more issues.

The Windows Precision touchpad is smooth and responsive, and I never had issues with palm rejection (a problem we faced with the Swift 7). However, the integrated button is louder and heavier than most touchpads I’ve used. I often found myself resorting to taps or the touchscreen; clicking felt laborious by comparison.

Our Swift 5’s 10th-gen Core i7 processor had no trouble accommodating all the multitasking of my typical work day, not to mention my streaming and browsing after hours. Even with upward of 25 Chrome tabs, Spotify, and Slack running, I never noticed significant slowdown. That said, don’t expect to be playing demanding games on this machine — you’ll want a discrete GPU for that.

It was also difficult to get this thing to noticeably heat up. I didn’t perceive any temperature change until I was running the device at full brightness with Slack, Word, and 28 Chrome tabs open. Even then, only the left side of the bottom of the chassis was hot — the heat was very tolerable on my lap, and the wrist rests remained cold. And the single cooling fan is very quiet; I couldn’t hear it unless I lifted the laptop up to my ear.

Acer slapped a Dolby Audio sticker onto our unit, but don’t get your hopes up. The dual downward-firing stereo speakers are fine, especially for a case of this size, but expect to make use of the Swift 5’s audio jack if you’ll be listening to music regularly.

I played a number of percussion-heavy tunes, including Diplo’s Lonely and Ed Sheeran’s Beautiful People, and while the vocals sounded good and actually had a decent surround-sound quality, the percussion was a weak afterthought, and the bass was inaudible. The Swift 5 also doesn’t get quite as loud as I’d like; even at max volume, I struggled to hear much of the quieter dialogue in a movie I was watching. But this is all somewhat understandable — Acer doesn’t have a lot of space to work with.

The stamina of the Swift 5’s 56Wh battery was disappointing. Acer is claiming up to 12 hours — I got about six hours of online multitasking, Slack, and occasional Spotify streaming at 50 percent brightness and default power settings. This isn’t a disastrous result for a battery of this size, and it’s about on par with the Swift 7, which also hits about six hours, but it’s worse than the previous Swift 5, which hit between eight and nine hours in our testing, and it means it can’t quite last a work day. It took me about two hours to power the Swift 5 back up during daily use.

I do like that you can charge the Swift 5 with USB-C, so if you’re carrying around a Switch, MacBook Pro, or other device with a USB-C charger, you can leave the Swift’s barrel-port brick at home.

Also, the notebook makes an odd beeping noise every time it starts or stops charging. It’s not loud enough to be a serious disruption in a public place, but I found it more irksome than useful nonetheless.

The Swift 5’s price tag made me worry I’d be bombarded with bloatware, but I’ve encountered surprisingly little. I occasionally get Norton Security popups, but they’re easy to dismiss and not super annoying. I found a couple of tacky programs installed, including a few games from Random Salad Games LLC, as well as some stuff you might actually use, such as apps from Dropbox, LinkedIn, Netflix, and software backends for third-party peripherals. It’s not intrusive, and doesn’t take up a ton of drive space, so I’m not worked up over it. (This, by the way, is a far cry from the previous Swift 5, which was stuffed with McAfee, Candy Crush, pop-up ads, and other junk). 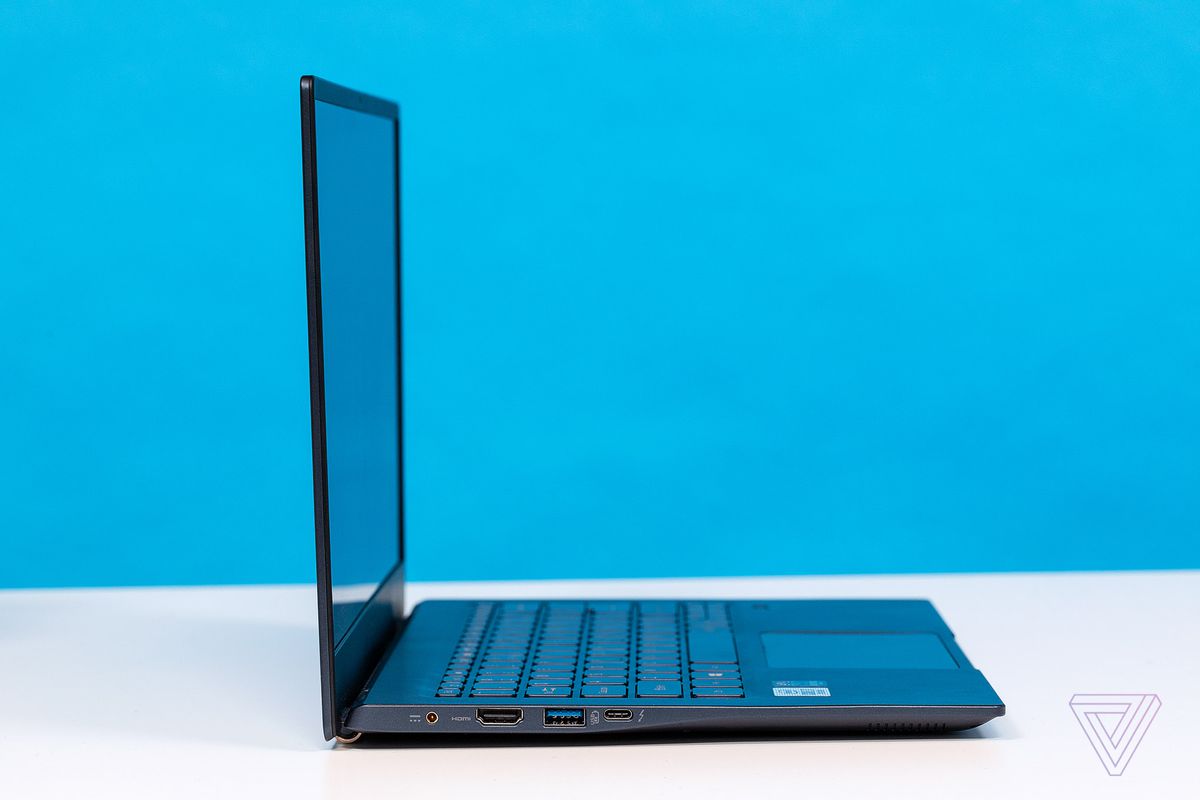 Would I recommend this laptop if it were four pounds and $1600? Nope. But with standout portability, good performance, and a $999 price tag, I think it hits a sweet spot.

What a new book reveals about Facebook and Russian interference

Here are the 129 members of Congress who just voted to support a conspiracy-fueled...