As I write this, the first studies of the Coronavirus outbreak are coming in. The count now exceeds 17,500 cases in 24 countries with more than 360 deaths, almost all in China.

Most at risk are older males with pre-existing chronic diseases that weaken their immune symptoms. Women appear to have a higher natural resistance to viruses. The main Coronavirus symptoms are cough, headache, muscle pain and fever.

You can follow the progression of the virus on this real-time map. China is being hit hard, and it is now an epidemic there.

Since it has spread across the world, it can be considered a pandemic.

The World Health Organization has declared it a global health emergency.

Airlines have been shutting down routes, at least one cruise ship is under quarantine, and countries are scanning aggressively for the virus at their borders.

I think there are six things we should be doing immediately. I’ll share my suggestions and then close with my product of the week

One of the obvious practices to discourage shaking hands and casual kissing. These are the most likely ways people transfer viruses directly to others, and these anachronistic practices are widely credited with making us sick in general.

The original purpose of handshaking was to compel armed men effectively to disarm themselves in greeting one other. It is just a habit now, and with this virus spreading rapidly, it is a habit that should be discouraged.

Kissing also would spread the virus and is effective at spreading other diseases. I’m not suggesting we give up romance, but we could do without the practice of kissing as a greeting. Particularly when you are talking about a male manager and a female employee, in this #metoo world we live in, it is a practice that should be discouraged for other reasons as well, but if we don’t want to spread the virus then casual contact should be avoided.

Given this would limit the spread of other diseases — we are in flu season, after all — these practices likely should be permanently retired.

One of the reasons to make this formal is so that peer pressure doesn’t push you into doing something unsafe. If you refuse to shake hands or kiss, it can look like you are antisocial, but if it is a general recommendation, you won’t stand alone.

2. Cut Back on Travel

The most likely places to catch and spread a virus are places where people congregate or are held together for long periods. Airplanes, trains and ships are all places where you are in proximity with others for long periods. If a single person presents with symptoms on any of these conveyances, it is likely the entire vehicle will be quarantined, which would have a significant impact on your life and ability to do your job, regardless of whether you get sick or not.

There are few things worse than being sick away from home. Being unable to get home can be so problematic that some will try to conceal their illness so they can travel. If you don’t have to take a trip or use public transportation, avoid it as much as possible, and that should lower your chance of getting the virus.

You also might want to consider this practice during flu season, when an unusually large number of contagious people may be traveling, even in a good year.

Staycations can be fun and far more relaxing than traveling, considering that you may return more tired than you were when you left.

3. Keep Your Hands Away From Your Face

With this virus, chances are you’ll pick it up through something or someone you touched and then become infected by bringing your hands to your face. Maybe your nose itches or there is something in your eye. As I was writing this, I caught myself rubbing my eyes.

At my desk in my home office, there is probably little risk, but our habits move with us, and what might be safe to do at home is far less safe around a lot of people. So, I recommend practicing using your sleeve rather than your hands, and aggressively wash your hands every chance you get.

Generally, you can tell at a glance if someone isn’t feeling well, but not if your head is in your smartphone and your mind is someplace else. This recommendation is also good advice for life in general, because not looking where you are going can be more dangerous than any virus if you lose track of your surroundings and step in front of a vehicle or off a ledge.

If you see someone who appears to be ill, maintain your distance, but you can’t avoid someone if you aren’t looking. If you see a lot of sick people and aren’t in a hospital, you need to get out of there before you join the club.

This lesson is something we should be teaching our kids more aggressively. Too many are buried in their phones and oblivious to what is going on around them, which can be problematic for their life expectancy in general.

The streets in much of China are nearly empty. So are the mass transit systems and stores. Folks have been asked to shelter in place.

If you aren’t set up to work from home or you lack critical supplies, you’ll be unable to do your job, or you’ll have to risk going out to get supplies. Make sure that if you have to work from home, you can. Keep enough of your medications on hand for several weeks, and enough food for at least a week.

It might be wise for companies to encourage working at home at this time, as that will reduce the number of people coming into the office and the related opportunities to spread the virus throughout the company.

We should have drills that showcase what to do in case the pandemic hits your area. These drills should not be limited to EMTs and other first responders — they should include the general population. Certainly companies should dust off their disaster preparedness plans and make sure they are up to date and capable of dealing with a pandemic.

One product to consider is BlackBerry’s AtHoc platform, which is designed to coordinate disaster response while rapidly and effectively ensuring employee safety. Problems become disasters through a lack of planning, and most firms do not have an up-to-date disaster plan, let alone one that is set up to deal with epidemics or pandemics. Now is the time to fix that.

One way to deal with a pending disaster is through thorough planning and practice. A major disaster is far less frightening if you already know what to do. Much of the terror is a result of not knowing what to do to protect yourself, your loved ones, and your employees.

Simply making sure you and your people know what to do can mitigate not only the danger but also the fear associated with it. Right now, your chances of getting sick are very slim, but that will change — either with the Coronavirus or some future threat.

Knowing what to do when that happens can influence not only whether you survive, but also how much trauma you experience. You have some control over both, and I’m suggesting you start now to exercise that control.

I get a lot of laptops in, but the machine I live on is a desktop PC, and I generally build my own. This does lead to some interesting support and failure experiences. For instance, my last water-cooled machine didn’t have enough airflow through its radiator, and it overheated, bleeding its blue cooling liquid all over my office floor. It looked like I’d murdered a Smurf (thank heaven for tile floors and the fact Smurfs don’t exist — otherwise I’d be in trouble).

It was surprisingly upsetting to walk into my office that morning to find my PC sitting in what appeared to be a pool of Smurf blood. I’d been mucking around with trying to improve the cooling to avoid such a crime scene when I got in a 32 Core Threadripper Talon system from Falcon-NW and fell in love. 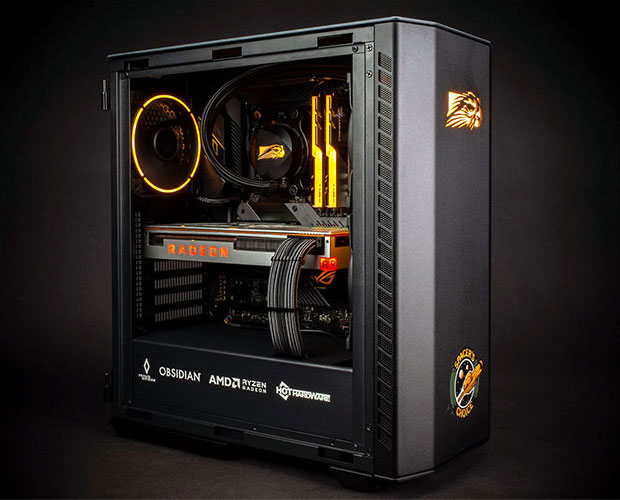 Once again, I was reminded that moving from PC to PC, particularly when you are on Windows 10 and Office 365, has become a ton easier. I did the swap in about 30 minutes, though it took the better part of an hour for the system to patch itself fully and sync with the Microsoft cloud while I did other things.

I can still remember this same process taking days in the past, and being so annoying that I dreaded a new PC. Now I look forward to it again. I should add that Office 365 migrations have improved since my last swap, and just clicking on the Office icon brought me to a download screen, and from then on, the installation was largely automatic.

The Talon with this Threadripper processor comes with an Asetek sealed liquid cooling system, which means I shouldn’t have to worry about my PC bleeding out on me again. It has a 1-TB SSD drive from Corsair (MP600), and one of the new AMD Radeon RX 5700 XT graphics cards.

My typical loading test is to install and run Ashes of the Singularity in Crazy mode, with massive numbers of vehicles, and see how long it takes for the system to overheat or fail. This box took the test with relative ease. I got some frame drops, but generally the game remained playable. While my prior Ryzen 9-based desktop system was powerful, this one blew it off the wall. This 32 Core Threadripper system is AWESOME, and it is my product of the week.