Boosted, the California startup synonymous with electric skateboards, appears to be in trouble. The company may be in danger of running out of money, despite raising tens of millions of dollars in late 2018, partially thanks to President Trump’s trade war but also because of a delay in shipping Boosted’s first electric scooter. Some of the company’s vendors have gone unpaid as a result.

Boosted has also lost four executives and other top talent in recent months. While the CEO says Boosted is in talks to raise new funding, the company’s leadership has discussed last-resort options like layoffs or a sale.

As a result, the company has been in something of a holding pattern since around Christmas, The Verge has learned after speaking with four former employees, one vendor, and two people close to the company. Inside, some employees spent the holidays worrying they’d be laid off. Outside, complaints about the company’s customer service are piling up on Twitter and Reddit.

“Like most start-ups, Boosted is not yet profitable and periodically raises new capital. We are in the fund-raising process, and are far along in advanced talks with a new investor and current investors to finalize our next round,” CEO Jeff Russakow said in an email to The Verge. Russakow added that Boosted “has not had any layoffs, and no layoffs are planned or pending.”

In the last two months alone, Boosted lost its chief marketing officer and three vice presidents. Noriko Morimoto, the CMO, left her post in December after four years with Boosted, according to her LinkedIn profile. Michael Hillman, Boosted’s vice president of engineering, left in January after seven months to take a job at Lime, according to his LinkedIn profile. Vice president of quality Harsh Karande also left Boosted in January, according to LinkedIn, after spending 11 months with the company. John Jacobson, who joined Boosted in 2017 as vice president of operations after seven years with Sonos, confirmed to The Verge that he left in January as well. Jacobson said his decision to leave was based on “personal reasons” and declined to comment further. Morimoto and Karande declined to comment; Hillman did not respond to a message seeking comment.

Boosted lost other high-ranking employees between September and November 2019. Carolyn Anne Toillion, who managed Boosted’s customer experience team for four years, left in November, according to LinkedIn; she did not respond to a message requesting comment. Julian Farnam, the senior mechanical engineer in charge of Boosted’s battery pack designs, left in September. His boss, Mark Frykman — who spent more than seven years with Boosted — left in November. Farnam said he enjoyed his time at Boosted but declined to comment further. Frykman said Boosted was an “amazing place to work, the people and products are amazing, and I miss it a lot.”

Dirk Aguilar, the company’s senior manager of international operations, and Angus Peart, a senior electrical engineer, both left in November for Ford-owned scooter company Spin after more than two years with Boosted. Aguilar said he left Boosted on “excellent terms,” and Peart didn’t respond to a request for comment.

In total, some 20 employees have left Boosted in this timeframe, many of whom had senior titles or had been with the company for longer than two years.

“Any company has natural rotation of personnel over years. As an organization that develops industry-leading talent, we periodically have staff receive great opportunities, and then we welcome new members to the Boosted family to develop next generation talent as well,” Russakow said in response to questions about the departures. The Boosted CEO added that it just hired on Bruce Riggs, who Russakow describes as “a luminary in the operations world,” as the company’s new chief operations officer. 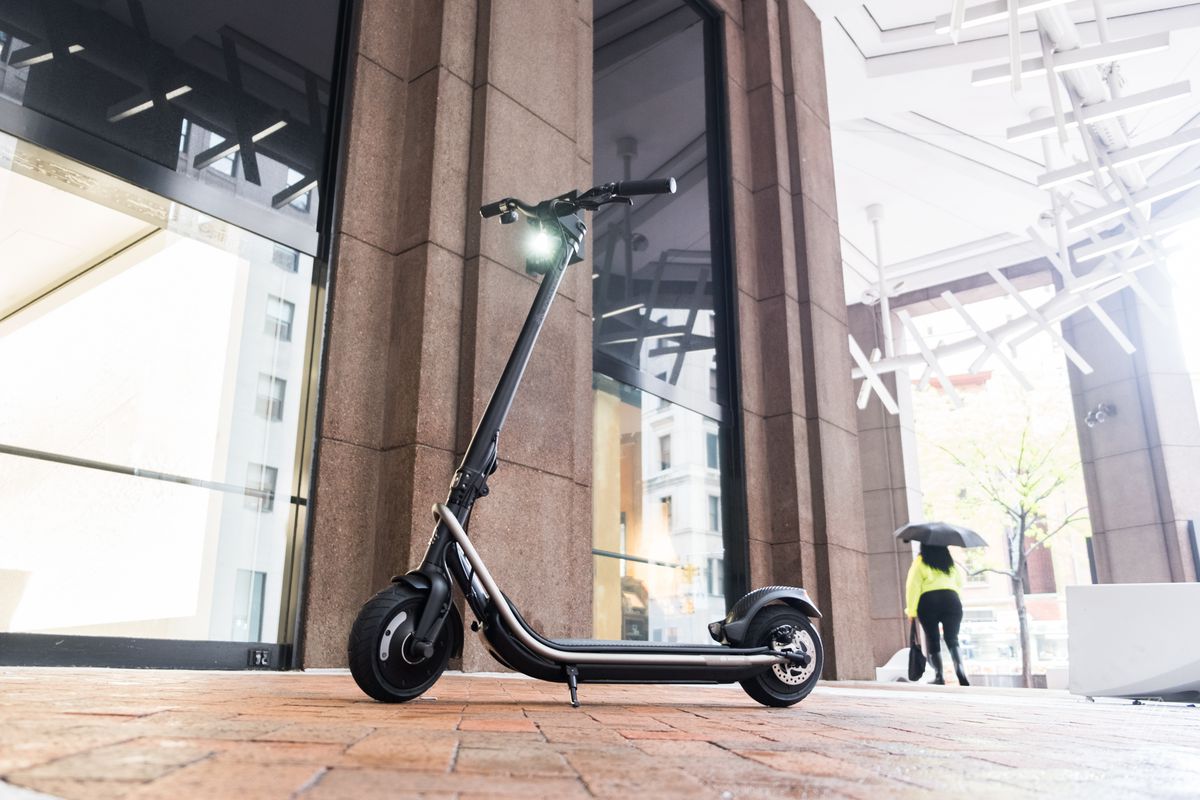 Photo by Sean O’Kane / The Verge

Boosted’s struggles come at a perilous time for the so-called micromobility industry. One of Boosted’s direct competitors, Inboard, recently went out of business after a failed pivot to electric scooters, as The Verge first reported last November. Even some of the bigger companies in the micromobility space have experienced trouble, despite raising far more money than Boosted. Scooter-sharing startup Lime, for example, recently laid off 14 percent of its employees and exited 12 markets despite having raised hundreds of millions of dollars.

It’s hard out there for micromobility companies

Born out of a Stanford startup incubator in 2012, Boosted pretty much single-handedly popularized the idea of electric skateboards — or, more specifically, remote-controlled longboards powered by electric motors. The company launched an overwhelmingly successful Kickstarter that same year and started shipping in 2014. Co-founder and former CEO Sanjay Dastoor often talked about wanting to grow Boosted beyond skateboards into a company that made “last-mile” vehicles in other form factors. But it wasn’t until he stepped down and was replaced by fellow Stanford mechanical engineering grad Jeff Russakow in 2017 that Boosted tried to make that happen.

Russakow almost doubled the workforce by hiring more than 80 people, bringing the total count close to 160 employees; he also moved the company into a new office. When Boosted launched its third-generation longboards in April 2018, the CEO told The Verge that the company had grown 450 percent year over year. In late 2018, he announced a $60 million investment, though he told The Verge in 2019 that Boosted wound up raising closer to $80 million. He praised Boosted’s investors as “really supportive” and “absolutely committed to the vision of the company.” One of the company’s big backers is the venture fund run by surfer-fighting billionaire Vinod Khosla.

One of the first things Boosted did with its new funding was finish work on a $1,600 e-scooter in May 2019 called the Rev, moving the company closer to breaking out of the electric skateboard niche. Russakow said last year that Boosted could be profitable, but his focus was on growing the brand. The company’s products are now available in more than 30 countries.

But all of that growth may have finally caught up to Boosted. One of the company’s vendors is owed nearly $100,000, including interest and late fees dating back to early 2019, according to invoices and emails viewed by The Verge. Boosted repeatedly delayed payments to this vendor throughout 2019, and two former employees say other vendors similarly went unpaid dating back to last year.

Deliveries of the Rev were delayed by at least two months, according to those emails, which made matters worse as it tied up a significant amount of Boosted’s cash. On top of that, Boosted’s lineup of electric skateboards and its scooter were all subject to tariffs from President Trump’s trade war, as the company has manufactured its vehicles in China since 2016. Despite telling The Verge in May 2019 that Boosted had “the financial ability” to “eat” the tariff on the skateboards, Boosted applied for and was granted exclusions from the tariffs late last year, according to correspondence with the Office of the United States Trade Representative that has since been posted to the Federal Register. But Boosted has likely not been paid back by the government yet, according to a person familiar with the company’s situation, meaning it could still be waiting on millions of dollars in restitution.

In his email, Russakow admitted that “the government refund process is very slow” for tariffs. He added that “the tariff environment has naturally created additional cash challenges for both US manufacturers and their suppliers, and we are collectively working through it.” Russakow also said that Boosted’s supplier base “has been very understanding, as their entire customer base is experiencing similar challenges.”

“Without question, the current geo-political environment and tariff wars are impacting the entire electric vehicle industry, and US manufacturing in general,” Russakow said in response to questions about the impact of the trade war. “We support the efforts of the media to draw attention to our nation’s trade policies and the deleterious effect it is having on US innovation.”

In the meantime, Boosted appears to have switched into cost-saving mode. The company recently parted ways with Eat Club, a company that provided lunches for employees, in early January, according to a Slack message viewed by The Verge. (One of the former employees says Boosted was behind on payments to Eat Club in 2019.) Employees were subsequently encouraged to bring or buy their own lunches in the message.

Boosted got hit by Trump’s trade war, too

Asked about this, Russakow said that Boosted “elected to put more resources into increasing our employees’ health benefits and reducing monthly out-of-pocket” costs.

Boosted has cultivated a loyal customer base over the last eight years because it inarguably builds the highest-quality electric skateboards but also because it fostered a close relationship with its customers. The company became well-known for providing reliable, sometimes even over-the-top customer service. When a battery pack caught fire in 2016, for example, Dastoor flew across the country to diagnose what went wrong. There are Boosted rider groups in most major cities, vibrant online communities full of discussions on when, where, and how best to ride, as well as tips on how to modify the products to suit different environments or riding styles — ideas the company has obviously taken into account given its growing lineup of accessories.

All of that now appears to be on the line as Boosted tries to overcome a hurdle that trips up so many other hardware companies in Silicon Valley: finding a new source of money that won’t fundamentally change the Boosted those customers have come to know and love.

Uber is at fault for fatal self-driving crash, but it’s not alone

Are You Suffering From Technophobia?

Download iOS 13.4.1 (iPadOS) with Bug Fixes for iPhone and iPad