After a long delay, a new MakuluLinux LinDoz release is pending last-minute finishing touches and is a week — if not days — away, according to developer Jacque Montague Raymer.

Over the last few months, I have been testing what is now the final build of a new upgrade designed to make using Linux easier than ever. I have reviewed a variety of different desktop versions of MakuluLinux since this Linux newcomer debuted a few years ago.

Recently, I discussed with Raymer the trials and tribulations he faced in maintaining and advancing his Linux line of distros. He revealed a process that no doubt is similar to what confronts many software developers who step into the crowded and financially challenging field of Linux operating system creation. Woven into our conversation is a preview of the next Linux thing.

MakuluLinux is a partial rolling-release operating system that debuted in 2015 with a different approach to implementing Linux OS features. The last few years have brought considerable change and new development to this Linux family.

The LinDoz distro uses Microsoft Windows themes integrated with superior Linux functionality. It provides a comfortable, familiar computing platform for those looking for an easy-to-use alternative to the Windows OS platform. It runs a heavily tweaked version of the Cinnamon desktop. 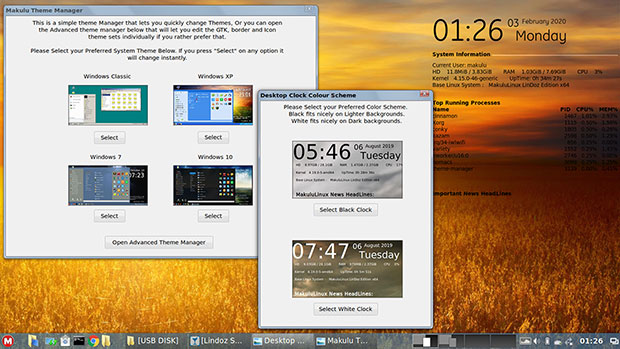 The MakuluLinux Theme Manager offers a choice of Microsoft Windows-style layouts along with other configuration options. The Desktop Clock Color Scheme lets you switch between light or dark clock applet displays with a single click to match the selected background image.

The LinDoz and Flash distros have been solid performers since MakuluLinux arrived in 2015. Along the way, Raymer rebuilt them. He completely reworked the distros. Flash runs a strongly tweaked iteration of the Xfce desktop. Core is an innovative distro he introduced early last year.

The Core distro has a totally radical desktop design built on a homegrown user interface centered around a spin-wheel style circular menu display. MakuluLinux Core was something entirely new.

“There is just enough Windows in LinDoz for them to feel comfortable, but it is all Linux under the hood, Raymer told LinuxInsider.

Previous versions of MakuluLinux LinDoz were based on the Debian Testing branch. Raymer, who previously lived in South Africa and relocated to Da Nang, Viet Nam, decided to retool LinDoz to be based on Ubuntu Linux.

That process slowed down the new build. So did discussions by his team about the future directional path. Up for discussion was potentially dropping one or more of the distros.

The release schedule delays were in part the result of deciding to first rebuild the in-house Constructor Tool packaged with the distros. Another cause was the need to resolve changes to the Calamares graphic interface installer that open source community members made to the installer in December.

The last-minute change was crucial because MakuluLinux uses the Calamares installer. Until the rebuild of LinDoz on a Ubuntu base and a port to a Debian base was completed, new releases for the Flash and Core distros would remain on hold as well.

The Linux development world is made up of many small software communities dedicated to specific distributions. Most are not larger business organizations the likes of Canonical, RedHat or Linux Mint. Limited time and money often impede progress.

Maintaining and upgrading releases is often a time-consuming and thankless job that never ends. Raymer found himself at such a crossroads. He had the potential to pursue a spinoff software creation at the expense of continuing his diversified operating systems.

The team met to discuss potentially putting more work into turning the Constructor Tool into some sort of kit for other developers to build their own modified distros. The existing Constructor Tool bundled in MakuluLinux lets users clone the configurations and installed applications to duplicate exact installation copies of their MakuluLinux systems.

With this tool expanded and redesigned, Linux developers then could compile all of the coded components to build their own distros easily, with virtually no knowledge or any coding experience needed, and put out a very professional distro with no effort at all, explained Raymer.

“We were going to start working on the Constructor Tool, build the kit, and start putting all effort into that. After all, with distros we have plenty of competition, and the workload is massive. Whereas if we become the builder of the builders — we build the tools that builders use — we have no competition, at least nothing near as nice as this tool we created. So, this was the plan. This is what we discussed,” he said.

The MakuluLinux team at first planned to phase out the MakuluLinux distros and focus on making “community” builds. The team would release a distro but would not work on it around the clock, Raymer disclosed. Instead, a support community could assume the tasks of editing and maintaining the selected distro with background assistance from the team as needed.

“We will assist as much as we can, to put it bluntly. We would still make distros, but not commit to full-time patches and maintenance unless there was an issue that really required us to step in,” he said.

Raymer and his team got caught up in a whole cycle of releasing distros. Many on the diverse, remotely operating team seemed to force staying on that path because they did not see the potential or Raymer’s vision of things that could be.

“So here we are nearly three years later, and I find myself reflecting, looking both back and looking forward,” he admitted.

Raymer has weathered the near breakup decision and is ready to advance the growth and development of all three MakuluLinux distros. However, he is not yet committing to any specific dates. That said, he is firm about releasing new editions this year.

The first upgrade is the pending LinDoz release. It is nearly ready to go. It definitely will be based on Ubuntu with a Debian-based release to follow. You can expect the Ubuntu-based version of LinDoz between now and the end of February.

Upgrades for Flash and Core still need quite a bit of work. A last-minute breakthrough on revamping the Constructor Tool this week led to Raymer pushing out the first Flash upgrade build for testing. He still has no clear release date for the Flash distro upgrade. The team will begin working on the Core distro upgrade once LinDoz and Flash are released.

LinDoz is not a Windows 7 or a Windows 10 clone, but users coming from those operating systems will feel right at home as a result of the Windows-style themes.

Combining that look and feel with the inclusion of Q4Wine, a GUI app to manage Wine, lets you bring your essential Microsoft programs to this Linux OS more easily than with other Linux options. Q4Wine enhances the functionality of the WINE Windows emulator.

However, users already familiar with Linux who have no need for Wine can just ignore or remove the emulator. They can change the theme choice to make the desktop view less like Windows. LinDoz is highly configurable beyond the look and feel of the themes. 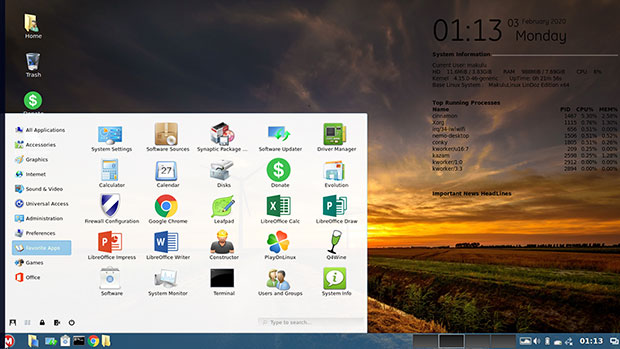 The LinDoz desktop displays all the essentials for Windows or Linux users. It has the bottom panel, an attractive choice of backgrounds, an updated menu, and top-caliber applications.

For instance, LinDoz has vivid backgrounds, a classic bottom panel, and a preconfigured workspace switcher applet with a nice collection of desktop desklets. It also uses a nicely tweaked version of the Cinnamon desktop with a unique menu.

The new menu blends both Windows and Linux functionality into one OS. The tweaks to the menu layouts make using menus much neater and more complete to provide a smoother user experience.

The tweaking that the Cinnamon desktop provides lets you substitute menu styles, place a variety of applets on the panel, add more panels, and position them wherever you like. Similarly, you can enhance the desktop’s functionality with desklet displays.

If you have used earlier versions of LinDoz, you will not see much in the way of new looks and major new features. Overall, this latest upgrade contains a tremendous amount of tweaking throughout the distro.

One of the key improvements is centered around changing the base code to Ubuntu, which also is based on Debian. To follow soon is a version based entirely on Debian Linux. The difference rests on Ubuntu being regarded as being highly stable with more current updates.

A new introductory video pops up only in Live mode. This is handy for new users, nice and neat and functional.

A new set-up manager is present in the Ubuntu-based version that is not the same as the intro manager in the existing Debian LinDoz version. It is laid out to go through a step-by-step process to set up things like WiFi, system updates, drivers and more.

You will find a new entry added to the right-click context menu on the desktop. This lets you right-click to open system settings.

This change makes up for removing the system settings launcher from the panel. Other improvements include an update manager shortcut added to the panel, and more Wine entries added to the right-click menu.

It has been years since I used Wine to load Microsoft Windows programs in any Linux distro. It was nice to discover that the configuration hassles and usability frustrations I recall when I did use Wine are not present in the new LinDoz release.

Also present in this upgrade is a better selection of productivity software and games. The redesigned menus have new categories and content. For instance, apps include a system monitor and the Gnome software center.

Overall, I am very impressed with the new LinDoz release. It is essentially designed as an easy-to-use operating system that feels comfortable for both Windows and Linux users.

In fact, it even makes using Linux easier for those with disabilities. LinDoz fully supports accessible options to cater for disabled or the elderly that may not see well. It now has a built in Screen Reader, Magnifier and On Screen keyboard. These features are neatly laid out with easy access.

I do not expect an automatic update from the still current version, however. Way too many changes are built into this LinDoz release. So grab the new ISO and experience an effortless fresh installation.

As of this writing, the upgrade was not yet posted for download. But Raymer’s targeted date is between mid February and the end of the month.

Kia’s EV6 is a small electric car with big dreams