If you are tired of distro hopping and want a computing platform that works without drama, check out the latest Freespire Linux release. Freespire, a U.S.-based distribution built on Debian/Ubuntu, is a no-nonsense operating system that is uncomplicated to install and use.

Freespire is released biannually. Developers on Feb. 11 released the latest MATE edition, the first of two updated versions. KDE will come out soon.

Two age-old sayings are apt when it comes to Linux distributions: “Something old is new again,” and “What goes around, comes around.”

Their literal meanings actually have nothing to do with Linux technology, but after two decades of reviewing computer operating systems and applications, I often get the feeling that I am in some Groundhog Day loop.

That was the case as I worked with the Freespire 6.0 release. Freespire is the free open source version of the commercial Linspire operating system developed by PC/OpenSystems. Both provide a very pleasant computing experience.

Freespire contains many of the same software packages as Linspire, but it strictly follows the Free and Open Source Software (FOSS) philosophy of providing only license-free software. So any Linspire packages that require the community-based Freespire developer team to purchase a license to redistribute the distro are left out. 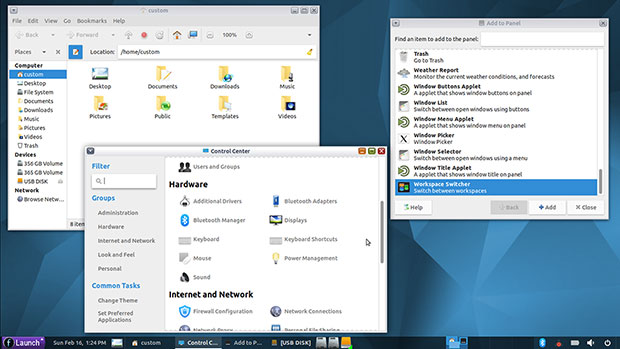 The Linux desktop has been the wanna-be replacement for Microsoft Windows for more than a decade. Some software developers are vocal about how ideally suited their distributions are to serve as a Windows clone.

Saying that a particular distro has a look and feel familiar to Windows 7 users, for instance, easily can be misunderstood by Linux newcomers. Saying that a distro frees users from the agonies of Windows is much more accurate. However, compatibility with Windows is quite a different marketing push.

Freespire goes a long way toward avoiding those advertising pitfalls. Yes, Freespire 6 has a clean and simple look that does resemble Windows 7. Freespire is also easy to install, use and maintain.

The distro’s current open source team avoids the generalizations that compare this OS to Windows. The developers make good on their assertions that users can enjoy trouble-free computing with Freespire Linux. That is a big improvement that sets proper expectations. 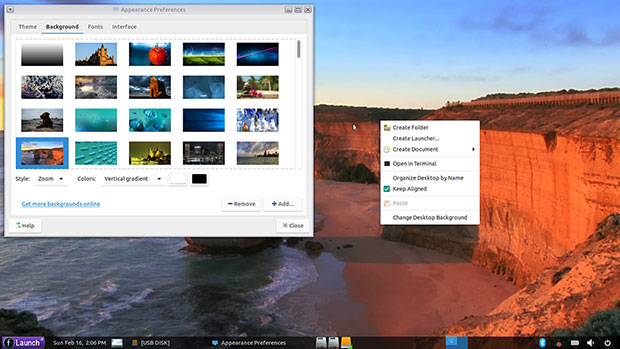 Freespire Linux has a well-stocked selection of background images and simple desktop layout.

Do not confuse this Lindows distro with the LinDoz edition of the MakuluLinux upgrade I reviewed a few weeks ago. There is no connection between the two.

The “Lindows” moniker triggered trademark complaints from Microsoft. So the third-party developer rebranded its Linux OS as “Linspire.” It used its OS to run a line of Linux-powered desktop computers sold through Walmart.

That marketing venture largely failed. Shoppers thought they were buying a bargain windows computer, according to various reports.

In July of 2008, I wrote a news article for LinuxInsider about then custom Linux provider Xandros announcing that it acquired the Linspire and Freespire Linux desktop operating systems from another developer company. The plan was for Xandros to combine technologies, expertise and market presence to become a one-stop Linux solutions company.

I lost track of the developments after that and could not find any record of product releases or additional corporate purchases until December 2017. That is when PC/Open Systems announced that it had acquired the Linspire and Freespire marks. The company was considering what to do with the properties and whether “it could successfully bring to market these products and shed the controversy and bad decisions of the past from Linspire Inc. and Xandros without abandoning [its] current customer base.”

Especially with Microsoft no longer supporting Windows 7, Freespire is an attractive Linux distro for users wanting a reliable and similar desktop environment for free.

Meanwhile, the Linspire Linux commercial version is available under PC/Open Systems’ Windows 7 Refugee Program. Consumers can purchase a boxed set of the current commercial Linspire Linux version for US$30.99.

The non-commercial open source Freespire 6.0 distro is a free download, but you can order an installation disk if you choose to pay $15.99.

Be careful if you look for the free download. I found numerous older websites still available that have only outdated Freespire versions.

You also can get Freespire 6.0 here.

Freespire 6.0’s MATE release has an appearance that will appeal to Windows 7 users. That same look and feel also will be reassuring to the distro-hopping weary.

The MATE desktop is a continuation of GNOME 2.0 simplicity. It provides straightforward functionality without the craziness of drop-down and slide-out antics and other eye candy embellishments proffered by the growing array of so-called modern desktop screen displays. 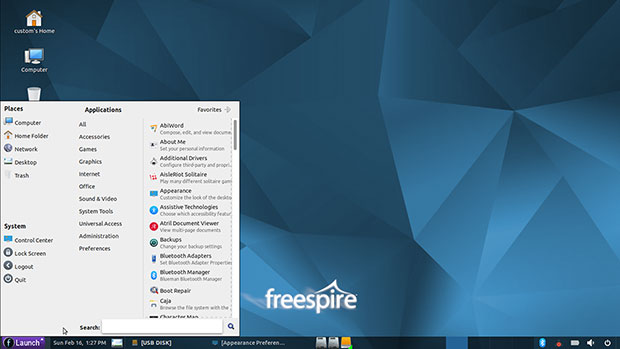 The Freespire 6.0 MATE desktop is uncluttered with a two-part main menu that makes finding everything quick and simple.

The default desktop view is uncluttered. Four Windows 7-style system icons are pinned to the upper left edge of the screen. These give you instant access to the Home and Computer directories. Both icons open the Caja File Manager. A trash icon and an icon to open the Network Servers panel complete the view.

The classic Linux panel is anchored across the bottom edge of the screen. It has right-click menu access for adding applets, icons and launchers to the panel, including the Virtual Workspace Switching tool.

The right end of this bottom panel displays the expected notification icons. The main menu button is on the left end of the panel.

The main menu is a single panel with three columns. Places and System categories fill the left column. The Favorites column fills the middle and right column areas. A search window lies across the bottom of the menu panel.

A button in the upper right corner of the menu panel switches the view to all applications. That button changes to a Favorites switch to return to the previous panel view.

The All Applications panel view displays three columns. On the left are Places and System icons. The center column lists the menu categories. The right column shows the application entries for the designated category selected.

Right-click on any application title to access a pop-up display to place that item on the desktop or panel, or to show in Favorites. Right-click anywhere on the uncovered desktop to access options to create folders, launchers or documents, or to change the background or organize desktop preferences.

The one option missing is a launcher for the menu, such as is available in the Xfce desktop.

This release has MATE version 1.20. and Linux Kernel 5.3.0-28. The distro uses the Synaptic Package Manager to add/remove software and receive system updates.

The Control Panel is a separate entry within the main menu. It has a well organized layout with a search window that makes finding settings options a breeze.

The preinstalled applications are what you typically find in lightweight systems. That surprised me since MATE is not an underpowered desktop environment. Included are basic programs for everyday computing tasks: surfing the Web, writing, handling email, and playing music and videos. Other basic graphics programs and editors are not the best of what is available in other distros.

Having to obtain and install better quality applications is a mere annoyance for experienced Linux users. For a Linux user migrating from Windows or Mac, however, not knowing what to look for can be a bigger problem.

Here is a sampling of the bundled software titles:

I was pleased to see Ice SSB included. This is an integrated website launcher that lets you access preselected websites to run as Web apps without having to use a standard Web browser. Not everyone is a fan of Web apps, but being able to “run” Web-based computing tools as if they were locally installed programs has its advantages.

The distro maintains a Software Center application that functions as a front end to the community’s software repository. It is an alternative to using the Synaptic Package Manager.

Freespire Linux 6.0 is a solid performer. I have not used the MATE desktop in quite a few years, but checking it out for this review instantly returned me to simpler days of using the Linux OS . I was a dedicated fan of the GNOME 2 desktop years ago and followed along with MATE rather than put up with the unsettling changes in the early releases of GNOME 3.

I like the simple approach Freespire brings to using Linux, and I’m anticipating the release of the KDE version. Check back in upcoming weeks for an update when the KDE version of Freespire 6.0 is available.

Apple and Epic both lost today

Can You Hear Me Now? Staying Connected During a Cybersecurity Incident

TREBLAB Z2 Bluetooth 5.0 Noise-Cancelling Headphones Is Up For A Massive Discount Offer For A Few Days – Get Them Now

TREBLAB Z2 Bluetooth 5.0 Noise-Cancelling Headphones Is Up For A Massive Discount Offer For...

Google’s next Nest Hub could use radar to track your sleep, and I have...