The beauty of Twitter is that every message is constrained to 280 characters and under, but sometimes you simply can’t get all your thoughts across in just a single tweet. Or perhaps you’re following a live news story and you need to follow the thread to read the news as it develops so there’s context for what happened earlier.

Whatever the reason, sometimes Twitter threads can get long, which can make them difficult to follow. Thankfully, there’s a bot that can help piece those tweets together into one piece of text without all the extra replies from anyone other than the person who originally started the thread. This is called “unrolling” a thread, and it’s created by a tool called @threadreaderapp, which lets you combine tweetstorms into one single post simply by using the keyword “unroll.”

There are two ways to activate the bot.

If you’ve ever started following a Twitter thread only to realize there are just way too many tweets, simply reply “@threadreaderapp unroll” to any tweet by the original poster. When the bot is done compiling the tweets, it will tweet you back with a link to a post that has pieced them all together in one place. This usually takes a few minutes. 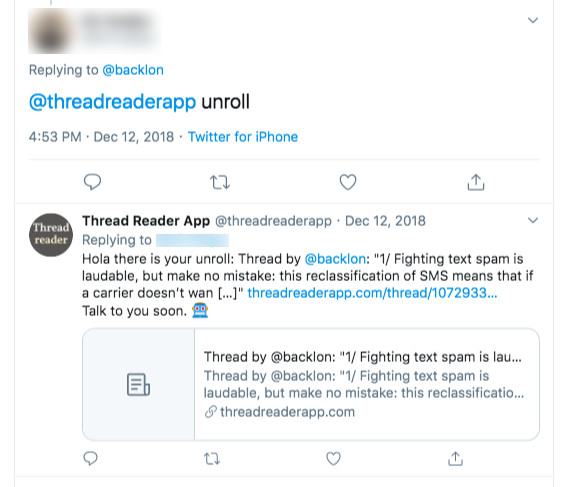 You don’t have to summon the bot on any particular tweet in the thread — just simply reply to one and the bot will sync up all the tweets that are linked to the very first one in the thread. Here’s a sample with Dieter Bohn’s thread about his nerdtastically eventful Christmas with Verizon.

If you don’t want to clog up a thread’s replies with an unroll request, you can also retweet it onto your own timeline. Click the retweet icon, choose “Retweet with comment,” and add the same “@threadreaderapp unroll” command to get the bot going. 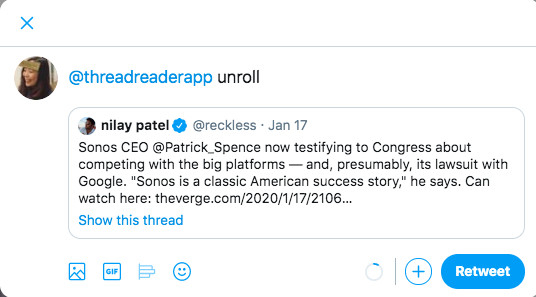 The bot will reply directly to you and only you after the unrolling is complete. This way you won’t accidentally respond to the original tweeter in the middle of an ongoing thread or disrupt any conversation people might be having. This is also particularly helpful if someone has already asked to unroll the thread but you didn’t see it.

If you find that the thread gets updated after you’ve already asked to unroll the tweet, head to the bottom of the unrolled thread post and click “Force a refresh.” The bot will recompile the thread and bring in any new tweet that may have been posted after the unroll was requested.

The bot is a free service, so naturally there are some limits as to what it can and cannot do. If a person has blocked @threadreaderapp, is a private user, or suddenly gets their account locked, the bot may not be able to access tweets to unroll into a single post.

The bot can also only access the last 3,200 tweets per user, so if the original tweeter is really on a roll, you might not be able to get all of their tweets compiled.