Netrunner “Twenty” is a birthday release offering that makes what was good even better.

Developers released Netrunner 20.01 on Feb. 23 with the latest stable Debian 10.3 “Buster” base and the KDE Plasma desktop. This release marks the distro’s 20th birthday in a way.

Code-named “Twenty,” the 20.01 release is the 20th upgrade of the Netrunner project over its 10-year history. It is packed with the latest KDE desktop packages, new theme tweaks, and a collection of GTK and Qt/KDE programs.

It has a unique default look and feel that is very user-flexible in terms of personal customizations. You will not find significant changes from earlier Netrunner versions, but the Netrunner 20’s approach to KDE Plasma will not disappoint.

Even if the KDE desktop is not your preferred computing environment, you will find it simple to use and very flexible to set up your way. The modifications enhance the user-friendliness of the desktop environment and preserve the freedom to tweak, which is a staple of this distro. 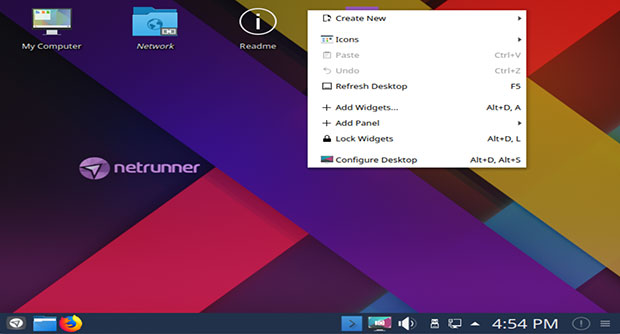 Netrunner ‘Twenty’ has an uncluttered look out of the box with unique features neatly tucked away that provide lots of functionality.

Long Road to Get Here

The Netrunner distro comes with a bit of a troubled history. Its developer team, heavily sponsored by the Germany-based Blue Systems IT company, released a separate “Rolling” edition based on Manjaro/Arch Linux in 2014. It was discontinued, relaunched in 2017 and discontinued again in 2019.

Last year’s decision to drop the Netrunner Rolling edition was an attempt to eliminate a redundant development cycle. Netrunner’s popular Manjaro Linux-based offering was on a rolling update schedule. That is typical for Arch-based distros like Manjaro. However, Netrunner’s Debian-based distro instead relies on two major releases per year in addition to necessary security updates.

After Netrunner’s developers announced a collaboration with the Manjaro community in October, it made sense not to continue with Netrunner Rolling. However, the team will offer continued support for existing Rolling users through its forums, based directly on Manjaro.

Netrunner Debian, Core and ARM versions are unaffected by the loss of the Netrunner Manjaro edition. The Debian version ships with a full set of preinstalled software for everyday use. The Core edition is a slimmed down version that lets you build your own system or run it on low-spec hardware.

For a while, Netrunner nearly morphed into a Hawaiian delight. In 2016 the Netrunner website announced that Netrunner Kubuntu was discontinued and directed visitors to its replacement distro, Maui Linux.

Maui was based on KDE Neon and featured KDE’s Plasma desktop. The previous versions, up to Netrunner 17, were based on Kubuntu/Ubuntu.

In October 2016, I wrote a review of Maui Linux for LinuxInsider. Maui was an attempt to continue the Kubuntu-based heritage while adopting some of the latest technologies impacting other Linux distros in varying stages.

That effort was short-lived. The Maui Linux website is still accessible, but the last release was the Maui 17.06 edition on July 9, 2017. That timeline coincides with the resurrection of Netrunner that year.

The Maui website has no information about the current status of Maui Linux. The download link is still active. However, distro tracking website DistroWatch.com lists the Maui Linux distro as “dormant.”

This release switches to the Breeze Window decoration with its darker color, which increases the display contrast and makes it easier to distinguish between active and inactive windows.

I like the red colored cursor (RED-Theme). It is a handy way to quickly locate the cursor on the screen. Very retro looking.

Netrunner Twenty has a uniquely drafted wallpaper. It sets a visual marker for the milestone of 10 years of Netrunner and the 20th version release. That, of course, is based on the standard two updates per year and overlooks some of the discontinued activity.

It comes with a nice application mix and a wide variety of tools for doing day-to-day computing tasks. For instance, applications include the LibreOffice suite, and Gimp (GNU Image Manipulation Program) for tweaking, editing and manipulating images. The mix is a nice exception, as other KDE distros typically are too limited to the KDE family of applications.

Krita lets you draw with your mouse or pen. Also bundled is the Inkscape vector-based scalable graphics editor and the Kdenlive video editor.

GMusicbrowser and Yarock are included to manage music data and listen to songs, along with the SMplayer for watching videos. A nice collection of games and puzzles supplement the largest Linux gaming platform Steam — and there is much more.

Netrunner’s main menu display is unique. The bottom panel displays the applications menu at the left end along with launcher icons for the Dolphin file manager and the default Firefox Web browser.

The right side of the bottom panel displays the system notification tray and a launcher for a special screen display configuration bar. Pressing the “Windows” key avoids having to click on the menu button on the bottom panel.

The middle portion of the bottom panel serves as a dock for thumbnails of running applications. Right-clicking anywhere on the desktop pops open a menu to do system-related actions such as configuring the desktop, and adding widgets and panels. So far, that is fairly standard.

You’ll see what’s unique about it when you launch the menu. It fills the entire screen, dividing the view into sections not bordered by columns and divider lines. Two buttons centered at the top of the screen switch between Apps & Docs and Widgets. Depending on your view choice, the content of the display changes. 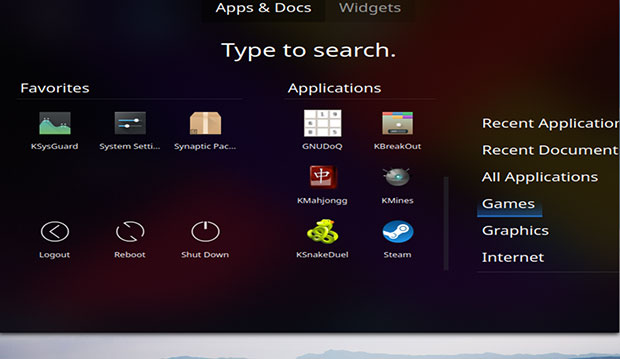 Part of Netrunner’s uniqueness lies in how it displays the main menu.

The layout itself is unique to Netrunner. A search area sits just under the top two buttons for quickly locating and launching an application. No need to click the search window to position the cursor in order to type an entry. Just start typing. Your entry appears as you type.

Categories hug the right edge of the screen. A vertical listing down the center of the screen lets you scroll through a category’s contents. A Favorites row and buttons for shutdown options are located in the left section of the menu display.

Right-click on a menu item to add it to the Favorites row or place its launcher on the desktop. You also can pin the icon to the bottom panel.

Other Linux distros try similar approaches with the KDE interface, but Netrunner’s developers execute their design better. It can be a bit daunting to work through all the myriad options and configuration settings of the KDE desktop, but this is not the case with the KDE integration built into Netrunner.

One of the first things you should do is go to the Plasma Tweaks tool in the main menu. All user interface-related K desktop modules are located there. Overall, the menu layouts for the system settings and other areas of personalizing the look and feel are well designed and uncluttered.

One of the really nice features of KDE in any distro integration is the Activities desktops. No other Linux desktop environment has an Activities-style feature. Netrunner’s inclusion of screen edge and corner hotspots provides quick access to this functionality, as well as scale and expo views of Activities and Virtual Desktops.

Activity screens are similar to virtual workspaces, only with more options. While virtual workspaces is a common feature in several desktop options, only KDE adds the additional functionality that Activities desktops provide.

KDE offers the best of both functional worlds when it comes to widgets or applets. You can place specialized displays and tools on the bottom panel and the desktop.

You can be very flexible with this functionality. You can designate widgets to be available on some or all Activity screens. You can place them on a default screen that makes widgets visible on all of your virtual workspaces.

It is easy to place widgets where you want them. It is a two-step process after you right-click on the desktop or the panel. Scroll through the list of available widgets in the pop-up panel. Then drag the item to where you want it.

The Netrunner distro used to be a bleeding-edge choice among KDE options. With little that’s new and must-have, this release takes the edge off the bleeding.

I wasn’t nudged away from my preferred competing KDE distro — the new Feren OS Plasma edition.

While Netrunner 20.01 provides a fairly solid integration of classic KDE desktop performance, this release is a departure, in that it is not a step or two ahead of most other KDE-integrated Linux OSes. I

Hardware requirements include a minimum CPU of 1.6 GHz Intel Atom N270 or greater and at least 1 GB of RAM with at least 10 GB hard drive space. Also, the computer should have Intel GMA 945 graphics card support with 128+ MB of video memory.

Netrunner is a unique distro with its own spin on the K Plasma desktop environment. Seasoned Linux users who like to fiddle and tweak an OS into their own platform will love how this distro integrates the KDE Plasma desktop. Newcomers can be quite content using the out-of-the-box settings.

MrBeast ends Finger on the App competition by telling players to stop after 70...