Saturday night, Google laid out everything it’s doing in response to the coronavirus outbreak in its own words — after days of confusion over exactly how the search giant is collaborating with the White House in the face of a growing public health crisis.

As Google’s official PR described it in a string of tweets, there are at least three distinct projects at work. First, Google’s medical subsidiary Verily is building a system for triaging individuals for testing, as reported on Friday. But the project is in the early stages of development, and current plans are limited to a pilot in the Bay Area, far from the national testing system described by Trump.

At the same time, Google is partnering with the government to build “a nationwide website that includes information about COVID-19 symptoms, risk and testing information,” something slightly closer to what Trump described at the press conference. Alongside those two projects, Google is also pushing verified information (usually from the CDC or WHO) through Search, YouTube and its various other web outlets.

As Google framed it, those projects were all President Trump was talking about in his confusing announcement on Friday. “We are fully aligned and continue to work with the US Government to contain the spread of COVID-19, inform citizens, and protect the health of our communities,” the company said.

But while the Google efforts are ambitious, they still fall far short of the comprehensive testing system described by President Trump on Friday, much less the 1700 Google engineers that were supposedly working on that system. And it’s still far from clear what the president was referring to when he described a Google-built website that would “determine whether a test is warranted and to facilitate testing at a nearby convenient location.”

New reporting suggests the idea of such a site was part of a muddled line of communication between White House advisor Jared Kushner and his various contacts in the tech world. The New York Times has reported that Kushner was in close contact with Verily CEO Andy Conrad, who described the triage project to Kushner in advance of the meeting. The idea of 1700 Google engineers number seems to have come from a volunteer sheet that circulated at a Google all-hands meeting. But while those 1700 Googlers were volunteering to help, that work would have been in addition to their everyday duties. It’s unclear whether any volunteers actually contributed to the project.

The resulting announcement caught the company entirely off guard. A senior White House official told The Washington Post that much of the confusion was the result of plans being rushed out too early, as the administration rushed to present news that would calm financial markets.

“Neither one of the announcements were ready for prime time,” the official told the Post. “People wanted news to announce.” 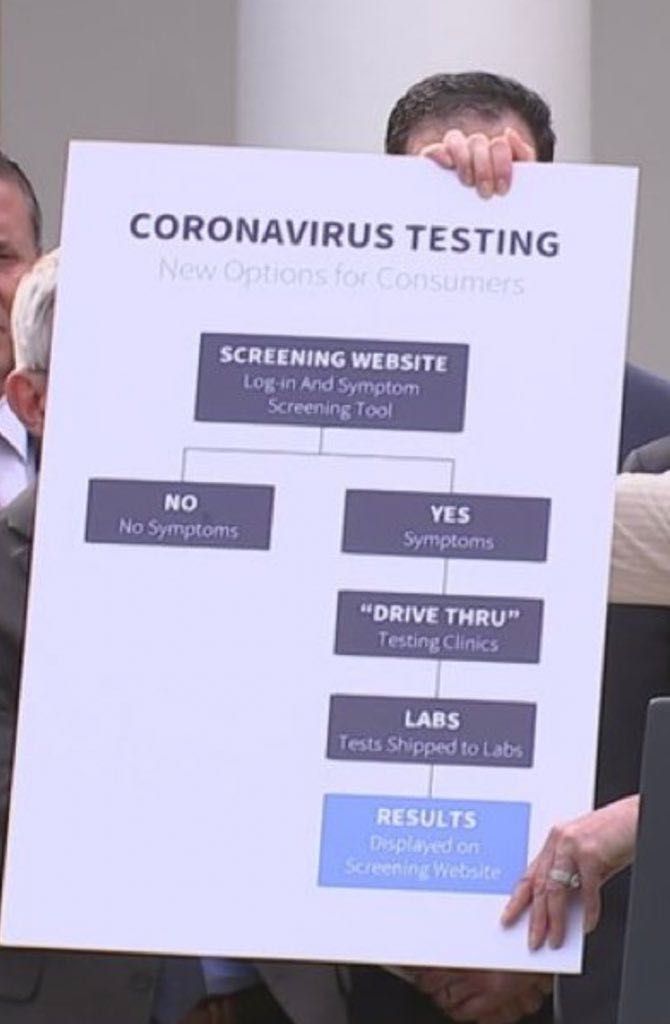 The diagram unveiled at Friday’s press conference — which promised a website that could screen patients, recommend clinics, coordinate with labs, and display test results — also seems to have been Kushner’s work. It’s not reflective of Verily’s project, but raised expectations for the broad role Google might play in testing potentially infected patients.

But process is eerily similar to a website unveiled by another Kushner-linked firm that same day. Earlier on Friday, Oscar Health announced a new testing-center locator feature, which would link to the platform’s telemedicine services. The steps described in the press release bear a marked similarity to the flowchart, both referring to the test subjects as “consumers” rather than “patients.”

Joshua Kushner (brother to Jared) is a major investor in Oscar Health, and the Times reported that Jared was in close communication with Joshua’s father-in-law in the day’s leading up to the announcement.

Still, Oscar Health denied any involvement with the announcement, or any connection between its new locator service and the broader White House effort. “We did not connect with the White House to provide input on their flow chart or tool idea before the press conference on Friday,” a representative told The Verge. “We take the pandemic seriously and want to do all we can to ensure our members and Americans, in general, are safe and healthy.”

US testing for the coronavirus continues to lag significantly behind other countries, presenting a major challenge for any attempt to contain the virus. According to CDC data, the agency has processed fewer than 20,000 specimens since the outbreak began. South Korea, a far smaller country, has tested more than 248,000 people.

Amnesia: Rebirth is a Full The Dark Descent Sequel Coming from Frictional This Fall