EndeavourOS is a rolling release Arch Linux-based distribution with some handy new features that improve the user experience.

Rolling releases are the norm for Arch-based Linux distributions. So is a high hassle rating for installing and adding software. It is in neutralizing this later point that EndeavourOS excels.

Most Arch Linux distributions are old school in terms of installation and setup options. Typically they let you burn the downloaded ISO file to DVD or USB to use as an installation medium, and that’s all.

Arch-based distros usually do not boot your computer into a standalone demo or live session mode. Arch Linux family members are not likely to have a user-friendly GUI-based installer to reduce the pain of manually partitioning and setting up installation commands.

EndeavourOS provides both, sort of. Installing Arch Linux systems is usually a daunting process for new users. You will not find a powerful automated installation tool with a fully functional graphical user interface (GUI). After all, this is still Arch world.

However, you will find lots of installation tips with the Calamares installer. By the way, the installer has a new look and feel. It has been somewhat remodeled since the last release in December. It now looks more like it belongs in EndeavourOS. 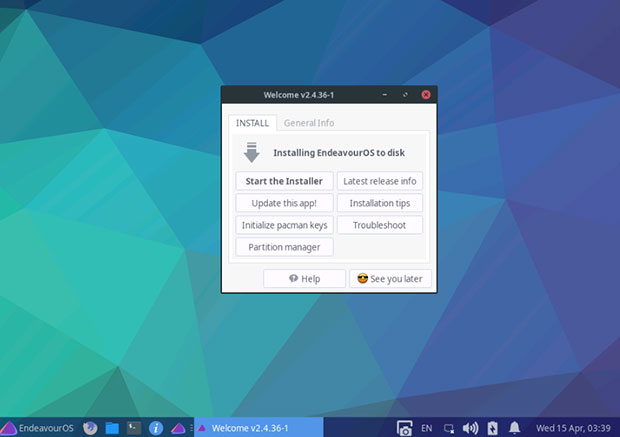 EndeavourOS 2020 has an improved Calamares installer.

Calamares now launches with a terminal window in the background. This lets you know the installation’s progress so you do not prematurely quit when the progress bar does not show movement at certain points during the install.

My big gripe with the Calamares installer has been its fail rate for auto partitioning. That seems to be resolved now. As a backup, it is good to know that the live session ships with Gparted to mitigate any problems.

Encryption anyone? Another bonus is the ability to run LUKS encryption from within the Calamares installer.

Plus, there is a very helpful wiki to handle all your questions and solve most of the installation glitches that can occur along the way.

What is particularly appealing with EndeavourOS is its clean look and simplified desktop environment. Not much has changed in this latest release.

Still, the differences make using this distro a more solid and pleasant experience. That says a lot when discussing an Arch-based system.

EndeavourOS is one of a few really reliable Arch systems that makes getting started a whole lot easier. Much of that credit goes to EndeavourOS’ roots.

EndeavourOS is terminal-centric. Hey, welcome to Arch world — but one of the big attractions with Arch-based systems is giving users full control from the get-go to create a computing system that does what you want.

You see that play out right from the start in the desktop selection. This distro gives you a choice of numerous popular desktop environments and one window manager. That includes installing a modest selection of apps and packages specific to the chosen desktop.

You simply click the box in the list of options. The Calamares installer does the rest for you.

The choices are impressive: Xfce4, MATE, Cinnamon, KDE Plasma, GNOME, Budgie, Deepin and LXQT. Also available as a choice is the i3 window manager.

The i3 option is a modified version, which makes it rather interesting. It is not based on a desktop environment. Instead it uses LXappearance, the standard theme switcher of LXDE. 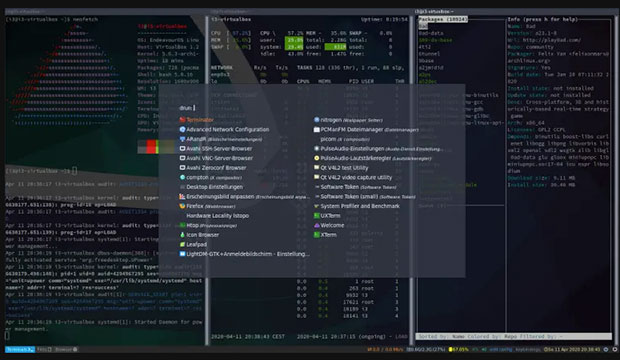 The i3- window manager is an option for desktop replacement, but it operates only with the keyboard.

This lets the window manager handle GTK stuff easier — a nice workaround as it normally doesn’t play nice with mouse and touch pads. i3 is keyboard-centric by design. Light and simple, it is a perfect fit for what EndeavourOS is all about.

The downloaded ISO lets you run a live session running the Xfce desktop. There is no list of individual desktop options. This reflects its “make it simple” mantra.

Just start the installer from within the live session. You will see an opening panel for the desktop choice.

Wait, there’s more! I am not a fan of multiple theme options in any flavor of Linux. I find themes to be a waste of both resources and my energy in setting them up.

This distro picks up where Antergos Linux left off in terms of seeking an easy-to-use online installer and modern user-friendlier Arch environment. Antergos, once a popular distro among Arch enthusiasts, shut down last May when its developer team members declared they no longer had time for it.

Bryan Poerwoatmodjo (Bryanpwo), project leader and founder of EndeavourOS, was the Antergos community forum moderator. One of his goals for the young distro was to make the terminal an integral part of the operating system while also providing a GUI for software installation as a small layer of convenience. He does both very well.

EndeavourOS is not an Antergos clone, but it is a very close replacement for other Arch-based options. One of this distro’s founding principles is to offer something not often available within Arch Linux communities. It promises to provide a nontoxic community environment where users actually can get friendly technical help.

Another essential feature is how closely it adheres to the Arch Linux goal of simplicity. With most other Linux families, users have several methods to get various computing processes done.

With Arch Linux systems, users apply one preferred way. It is the Arch way: through organized and well-documented configuration files. Arch Linux is a distribution independent of Debian or any other Linux distribution.

Some of the included software depends on your desktop choice as noted above. You get the Firefox Web browser, Vivaldi or Brave. You also get the Nano text editor and Yay, a terminal-based wrapper for the Arch User Repository (AUR) to search and install popular apps. Many more apps and packages are included.

As part of the simplification process, EndeavourOS ships with the Nvidia-installer. This tool automatically installs the correct Nvidia driver for your hardware.

While I’m on 5the topic of Nvidia drivers, I was very pleased to find special hardware help in this release. Previous EndeaavourOS ISOs refused to boot on systems with a newer dedicated Nvidia graphics card.

I ran into that problem on a new test computer. This release remedies that issue. It has an option to boot the ISO with the open source drivers or the Nvidia proprietary driver.

You get one more hugely helpful tool. The developer’s reflector-auto app helps you search for the fastest download mirror near to you.

You also get Pahis, a tool that shows the package history in the terminal. Eos-log-tool is a GUI app to create a log file needed when reporting a bug on the forum or the bug report area.

I said at the start of this review that several factors make EndeavourOS a better choice for using Arch-based Linux distros. One final example is solving the infamous multi-boot snafu in Arch-based distros.

This is an upstream issue. The developer put a downstream fix into play. Using the EndeavourOS grub in all Arch distros should result in no more multi-boot failures.

EndeavourOS might well be the perfect solution to getting the best that Arch Linux offers. It is an ideal starting point to begin exploring what makes Arch-based distros different from the rest of Linux Land.

Depending on your choice of desktop environment, you can run EndeavourOS 2020 on computers with a minimum of either 2 GB or 4 GB of RAM.

Samsung Galaxy Chromebook: Is the Ultimate Chrome OS Platform Worth the Price?

Wi-Fi 6 Is Ready for Prime Time