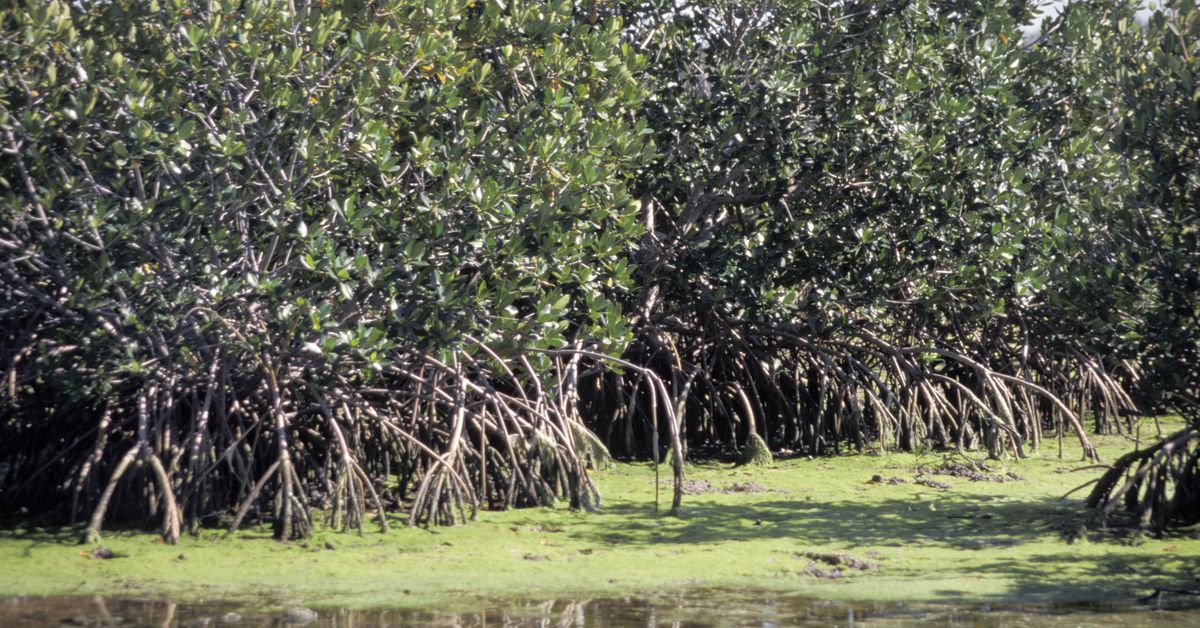 Mangrove forests aren’t moving fast enough to escape rising sea levels and could disappear by 2050, according to new research. That’s because these forests won’t be able to keep up with rising sea levels if greenhouse gas emissions continue unabated. The trees play a vital role in storing planet-heating carbon dioxide and protecting communities from storms and coastal erosion.

Mangrove forests will be in danger of dying out when sea levels rise by more than 6 millimeters per year, the study published in the journal Science found. That threshold could be reached in as little as 30 years, scientists say, if people don’t cut their greenhouse gas emissions. Sea levels are already rising globally at a rate of more than 3 millimeters a year — although some places are already seeing even more drastic change.

Mangrove trees do a lot of good for people and the planet. Restoring mangrove forests is one way scientists in places like Florida have sought to defend coastal communities from the ravages of climate change. But if mangroves are going to save us, we’ll need to first save them.

If mangroves are going to save us, we’ll need to first save them

“We have an opportunity here to take action and to keep the rates of sea level rise below these critical thresholds, which is part of the reason that this is an important study,” says Erica Ashe, one of the authors of the study and a post-doctoral scientist at Rutgers University.

The trees create a barrier against destructive storm surges, stop encroaching seas from gobbling up more land, and give shelter to wildlife. On top of that, mangrove forests are even better at keeping carbon dioxide out of the atmosphere than rainforests of the same size.

Up close, a tangle of mangrove roots alone can resemble a forest rising above the water. Those roots can actually pull freshwater from salty seawater and serve as a nursery for fish, crustaceans, and shellfish. But if their roots are completely submerged for too long, the mangroves will drown.

One-fifth of the world’s mangroves already perished between 1980 and 2010. The trees can usually adapt to rising water by moving inland, but human development along coastlines now blocks their way. That conundrum, called “coastal squeeze,” is playing out in Florida, which has one of the most expansive mangrove systems on the planet. One of its biggest estuaries, Tampa Bay, has lost almost half of its mangroves in the past century.

One-fifth of the world’s mangroves perished

To figure out how much sea level rise is too much for mangroves to survive, Ashe and her colleagues studied sediment cores from 78 locations across the globe. That revealed data on mangrove growth over the past 10,000 years. There isn’t enough information on the recent effects human-induced sea-level rise (caused by melting ice and warmer water expanding) have had on mangroves. So the researchers looked for when ancient mangroves emerged. They found that mangrove ecosystems only developed when rates of sea-level rise dropped below about 7 millimeters a year.

Governments should find solutions to keep sea level rise below that threshold “to mitigate climate change and to protect millions of people who depend on mangroves for shelter, flood protection, food, and fiber,” writes University of Queensland professor Catherine Lovelock in an article commenting on the study published today. That means cutting back on fossil fuels and giving mangroves more time and space to adapt to the changing world.

Beyond Good and Evil 2 Development in Disarray, Michel Ancel Accused of Toxic Management

PlayStation 5 Pre-Orders Returning to GameStop and Other Retailers Tomorrow

The Drones Are Coming

Make Cleaning Effortless with Roborock S5 Max – Officially Released in the US with...

Apple, Google, and Amazon are teaming up to develop an open-source...