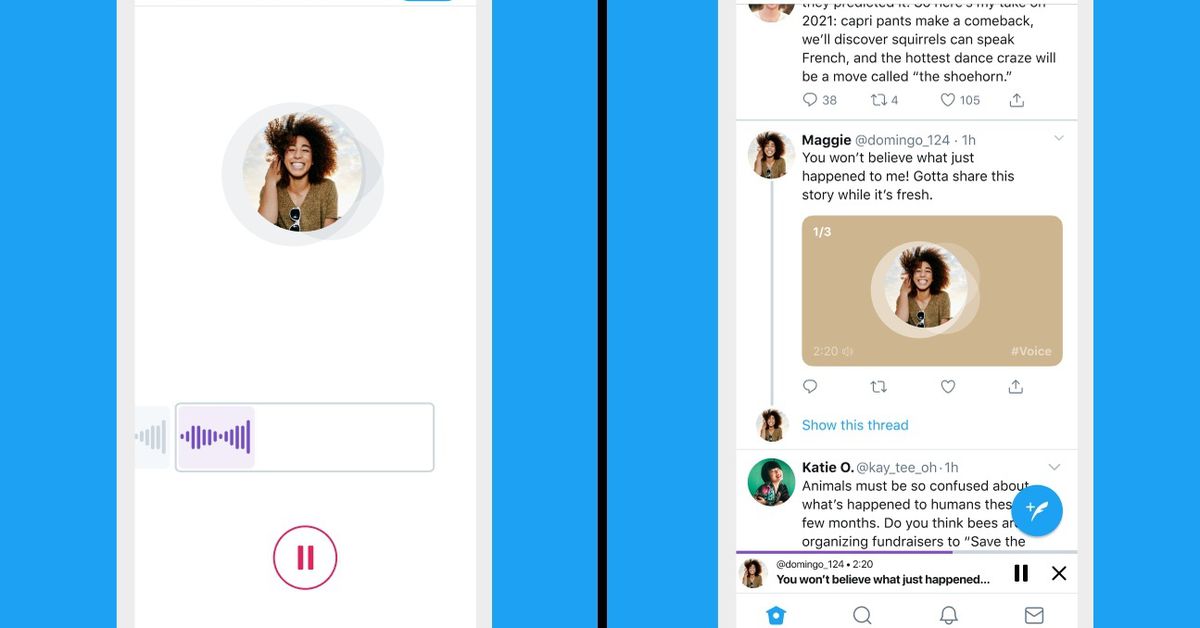 Twitter is rolling out the ability to record audio snippets and attach them to your tweets. The new feature is available first on iOS and launching today for “a limited group of people,” according to the company. “Sometimes 280 characters aren’t enough and some conversational nuances are lost in translation. So starting today, we’re testing a new feature that will add a more human touch to the way we use Twitter — your very own voice,” Twitter’s Maya Patterson and Rémy Bourgoin wrote in a blog post.

If you’ve got access to it, you’ll see a new waveform icon beside the camera icon when composing a tweet. Tap that, and a red record button appears at the bottom of the screen, which you can tap to start recording your message.

“Each voice tweet captures up to 140 seconds of audio. Have more to say? Keep talking. Once you reach the time limit for a tweet, a new voice tweet starts automatically to create a thread,” Twitter said.

Audio can only be added to original tweets, according to this help page, so you can’t include them in replies or retweets with a comment. Another minor thing to note is that whatever your profile picture is when you record an audio clip will always be attached to that audio tweet. “Your current profile photo will be added as a static image on your audio attachment and will not refresh if you update your profile photo,” Twitter says.

Audio tweets could pose new moderation challenges for Twitter, and it’s also important to remember the accessibility factor here. The Verge has asked Twitter for more details on how it will make it easier for people who are deaf or hard-of-hearing to access these audio tweets.

Silicon Power Has Announced the A62 Game Drive HDD

Watch How a YouTuber Makes a Custom M1 iMac Using His M1 Mac mini, a Third-Party Monitor, and Other Parts

Peloton is fighting a recall request on its treadmill after a child died last...