The platform’s Qualcomm QRB5165 processor, which is customized for robotics applications, offers a heterogeneous computing architecture coupled with the 5th-generation Qualcomm AI Engine — with its new Hexagon Tensor Accelerator — that delivers 15 Tera Trillion Operations Per Second (TOPS) of AI performance.

“The QRB5165 has an octa-core Qualcomm Kryo 858 matched with an Adreno 650 GPU and a digital signal processor,” Ray Wang, a principal analyst at Constellation Research, told TechNewsWorld.

This makes it “super fast,” Wang remarked. Its processing rate is 2 Gigapixels per second, it can perform 8K video recording at 30 fps, and handle 200-megapixel photos.

“When paired with the AI engine, it has the speed to improve industrial robots, military applications, and even retail and hospitality scenarios,” Wang added. “You get seven concurrent video cameras that can do things like object detection and classification, self-navigation, and path planning.”

Interest in the RB5

At least 20 companies, including LG, drone maker Skydio, security robot maker NXT Robotics, and China’s delivery robot and drone maker Meitun, had an early look at the technology and will likely use it, Qualcomm said.

More than 30 hardware and software companies are working on ancillary technology to enable various robotics applications. They include drone mapper AirMap; Canonical, which publishes Ubuntu; robot fleet manager InOrbit; and Intel with its RealSense technology for depth and tracking cameras.

Commercial products based on the RB5 platform are expected to be available in 2020, said Dev Singh, head of Qualcomm’s robotics, drones and intelligent machines business.

This is realistic because “they’ve been working with over 50 OEMs and partners well before the announcement,” Francis Sideco, a senior analyst with Tirias Research, told TechNewsWorld.

Qualcomm “is pretty reliable in their predictions,” Rob Enderle, principal analyst at The Enderle Group, told TechNewsWorld. “They’re used to a smartphone cadence and this timeframe would easily fit within the 6-month smartphone window.”

The RB5’s main selling point is that it “has low power consumption for an SoC with such high capability,” remarked Chris Taylor, a research director at Strategy Analytics.

“In terms of total cost of ownership, the RB5 probably hits a sweet spot for many of the applications Qualcomm talks about compared to existing solutions using more conventional chips,” Taylor told TechNewsWorld.

The platform is available with multiple options, and has an option for extended lifecycle until 2029, Singh stated.

“The battle for the autonomous enterprise starts with robotics platforms in hardware,” Constellation Research’s Wang remarked. “Qualcomm has done a good job assembling an ecosystem for the RB5.”

Robotics development platforms “will be key to accelerate edge computing, the Internet of Things, and automation,” he noted. “The post-pandemic playbook shows a huge interest in improving robotics, customer facing automation, and ambient experiences.”

The kit consists of a robotics-focused development board that complies with the 96Boards open hardware spec to support a range of mezzanine-board expansions for developing proof-of-concepts and rapid prototyping. 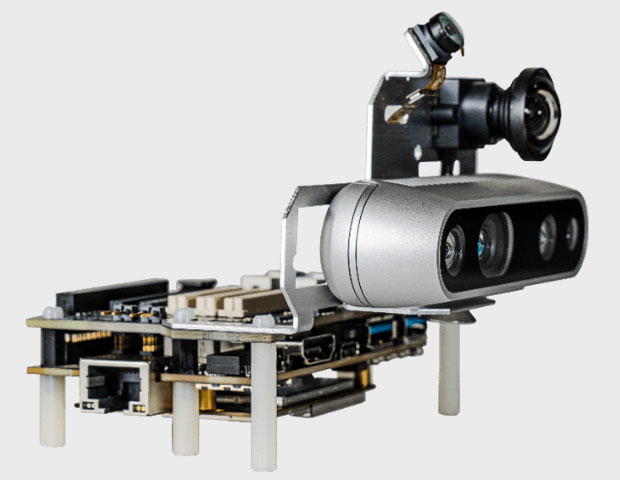 It supports Linux, Ubuntu and Robot Operating System (ROS) 2 and has pre-integrated drivers for various cameras, sensors and connectivity.

The board supports the 5th generation Qualcomm AI engine. It can operate between -340 degrees and +105 degrees Celsius. It communicates through industrial protocols such as EtherCAT and time-sensitive networking (TSN), and supports security at almost every layer.

The kit will be available in late July.

The main competitor to the RB5 is Nvidia’s ISAAC SDK.

“Nvidia’s is the best known,” Enderle said. “Their Jetson offerings are similar in concept.”

Intel “has the making of one used in their drone swarms, but they haven’t packaged it up as well yet,” Enderle remarked.

However, the mix of low-power AI and connectivity “is unique to Qualcomm,” Kevin Krewell, a principal analyst at Tirias Research, told TechNewsWorld.

That said, “The main problem is the lack of common standards for robotic automation at present,” Mueller told TechNewsWorld.

“There’s a lot of interest in 5G in robotics and drones,” Krewell said. 5G has lower latency and higher bandwidth, “which can reduce connectivity lag.”

There is some debate, however, about whether 5G will take off here in the United States.

The United States Federal Communications Commission has a plan to boost 5G, but there are conflicting reports about the market for the technology.

“One of the impacts of COVID-19 is the need for more remote interactions,” observed Tirias Research’s Sideco. “Robots and drones help with this demand and those with 5G and AI even more so.”

Some believe the pandemic will push the demand for 5G but others point out that building out 5G networks is not proceeding as rapidly as hoped.

“The pandemic slowed manufacturing and some wrongly concluded it spread COVID-19, which has delayed deployment and resulted in the destruction of some 5G towers,” Enderle said.

However, “We should have decent coverage of major cities and some rural areas in the U.S. by year end.”

Lack of coverage won’t be a problem because “5G robotics can use 4G, WiFi or no connectivity at all,” Strategy Analytics’ Taylor added.

Match Group – Including Tinder, Hinge, and Match.com Is Getting Sold Off

Halo Infinite No-Showing the VGAs, “High Level” Update to Restart the Hype In a Few Weeks