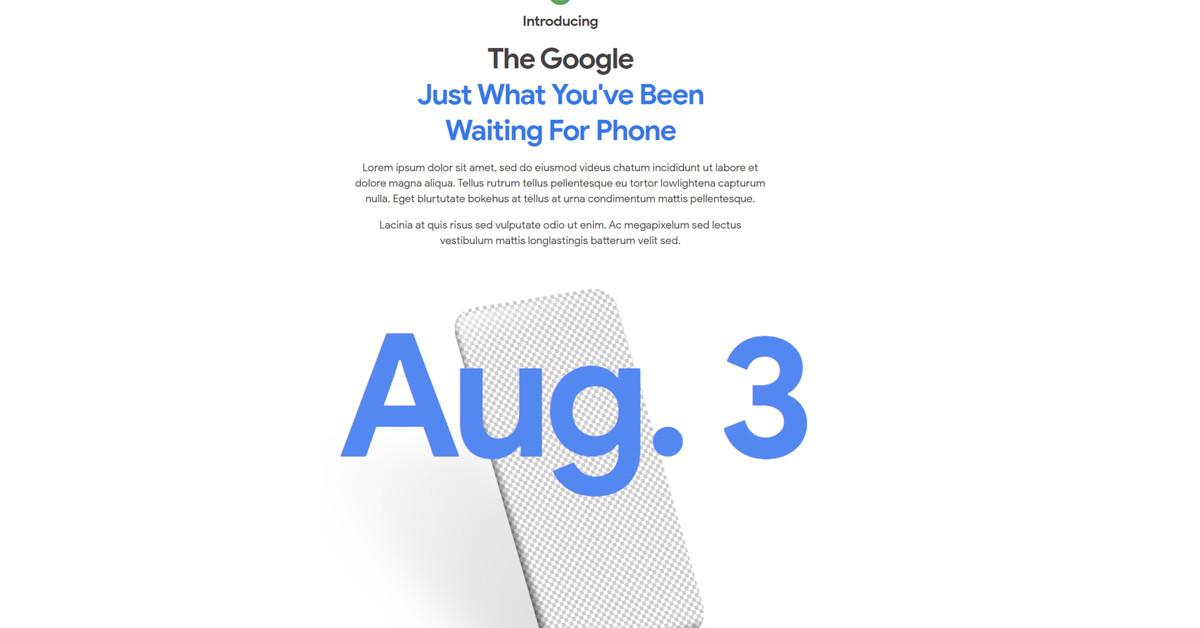 Google’s next budget phone, the Pixel 4A, is likely just days away from going on sale. The company has posted a teaser on its online store, saying that “the Google just what you’ve been waiting for phone” will be revealed on August 3rd. 9to5Google spotted the page. To unlock the full message, you need to tap the various boxes until the colors match Google’s logo: blue, red, yellow, blue, green, and red.

Google has also updated some of its social media images (like the header for the Made by Google Twitter account) with a small circle cutout, which seems like an obvious reference to the 4A’s display with a hole for the selfie shooter. You’ll notice some references to photography in all that “lorem ipsum” text on the Google Store page, like “lowlightena”, “bokehus”, and “megapixelum.” The camera is always a strong suit of Google’s phones, and the Pixel 4A should carry that forward at a price much lower than the standard Pixel 4.

The wait for the sequel to last year’s Pixel 3A has gone longer than expected. In May, Google canceled its I/O developer conference, expected to mark the Pixel 4A’s announcement, due to the COVID-19 pandemic. But earlier this month, the device turned up on Google’s website after the company mistakenly posted an image to its store. That was the first real hint that the 4A is really, actually coming soon — and now Google has confirmed that it’s less than a week away.

According to previous leaks, the phone will have a 5.8-inch OLED display and be powered by Qualcomm’s 730 chipset. Other expected specs are 6GB of RAM, 64GB of storage, and a 12-megapixel camera that should produce results very similar to the flagship Pixel 4.

Microsoft vets, Ciara, and Macklemore team up to own Seattle Sounders...