Last week had presentations from three of the significant processor companies, each planning to revolutionize the PC market. This revolution was an immense change from just a couple of years ago when everyone and their brother seemed to think that PCs were dead.

One of the few positive impacts from this pandemic is that PCs have nearly sold out everywhere, resulting in unprecedented demand for a class of products that had gone into decline as a result of insufficient marketing.

Let’s talk about improvements in how we appear on videoconferences this week, and we’ll close with my product of the week — the updated Ooler water-cooled mattress pad that’s been helping me sleep during this pandemic.

The Cause of the PC Decline

There is a common segment that I understand is in most college marketing programs and was undoubtedly in mine, which talks about the problem with marketing. That problem is that operational executives don’t understand it and will cut marketing costs to save money, not realizing that the lagging impact will be sharply reduced sales.

My lesson happened far earlier than in college, when I was a child speaking with my grandfather who was a CEO in the petrochemical industry. He told me the story of a train trip where William Wrigley Jr., the founder and CEO of the Wrigley Company (of chewing gum and candy fame), was riding with a young intern.

The Intern asked why Wrigley spent so much on marketing, given that his company was the segment leader, and sales were impressively high. Wrigley replied by asking “since the train was already traveling at 60 mph, why don’t they stop shoveling in coal because the train is going fast enough?” The answer is that the train will eventually run out of steam and stop, and that is exactly what happens in business.

Ironically, Wrigley, which was dominant when I was a child, is almost unknown today because the company stopped marketing. That’s what happened to the PC market.

In the 1990s, we had tech TV shows. The companies had commercials and were marketing heavily, ergo buyers were far more likely to prioritize buying a new PC. When the PC companies cut back on marketing to focus on price competition, the shows died, demand dwindled, and the result was a declining market which now has been revitalized by the pandemic.

However, without demand generation, this good news will turn bad because we’ve now saturated the market with new laptops — meaning it could be 5 to 8 years before the majority of folks want to replace them — unless the PC firms go back to creating and marketing compelling offers.

This problem isn’t an easy fix because, thanks to streaming, folks aren’t watching TV commercials as much as they used to, and Google and Facebook have made marketing and advertising far more difficult in terms of large-scale awareness. Although they have made it a ton easier to target, so done right this problem could be mitigated.

Last week, Qualcomm, Intel, and Nvidia may have showcased the way to do this by focusing much of their new offerings on making you look better; and looking better, because it’s connected to status, could be an excellent foundation for driving demand.

There is a song from the musical West Side Story called I Feel Pretty that’s running through my head right now. The fact is that people tend to judge us by our appearance, and for a lot of folks on calls, that appearance has degraded sharply this year. Wrinkled clothing, no makeup, partial beards, the hair on men down to their shoulders, and work locations that are sloppy, dingy, dark and unattractive are all everyday experiences in large Microsoft Teams and Zoom events (these two offerings are trending to become new standards).

Also, because of where the camera is situated on monitors and laptops, we never seem to be looking at the people to whom we are speaking. (In-screen cameras are on the way and will arrive on smartphones shortly, but haven’t been announced yet for PCs yet.)

These appearance degradations subtly or overtly devalue what colleagues think of us — from vendors, to co-workers, to managers and executives. This is undoubtedly changing our promotion and raise opportunities for the worse, and making us look unprofessional. While we don’t necessarily need to feel as pretty as Julie Andrews did in that linked song, our appearance does reflect on our confidence; and knowing we look our best should improve not only how others perceive our competence, but our own confidence as well.

All three vendors showcased technology that would improve how people see you. Nvidia seemed to go the farthest but has not yet focused all of their technology on the problem.

The 8cx platform from Qualcomm has a unique AI feature that adjusts your eyes in real time, so to the remote participant it appears that you are looking directly at them. It’s critically important to look people in the eye. I trained in negotiation, and one of the rules is that you want to look people in the eye to be taken as sincere; if you aren’t doing that, you appear untrustworthy. Our current camera placement makes it almost impossible to look someone in the eye, and athat subtly makes people mistrust you as a result.

Qualcomm also had sound improvements that should make it easier for the parties to understand each other. It’s interesting to note that Qualcomm’s approach is focused on helping you hear better, while the others are focused on helping others better hear you.

Intel, with its Tiger Lake and Evo platforms, is integrating artificial backgrounds into their solution, along with vastly improved noise cancellation which eliminates the annoying sounds that tend to drift into meetings from home offices. This combination should make you appear more professional during these meetings; and as the technology advances, may convince buyers to cycle their PCs faster and thus help prevent another sharp decline in future sales.

Nvidia had a similar approach to Intel with its powerful GeForce RTX 30 launch. The company packaged its solution under a Broadcast app designed to not only help with video calls, but to assist podcasts, and capabilities that allow your camera to track you better so that your head stays in the center of the frame — which should help manifest professionalism during video conference calls.

But where Nvidia potentially took it to the next level is Omniverse Machinima, where you can use game assets to create a movie and automatically animate digital avatars. If this technology were applied, which I expect it eventually will be, you could create 3D scans of yourself dressed for business, and then use your camera to sync them with your body. Then you’d never again have to dress, put on makeup, or even get out of bed for a meeting — while still appearing well dressed and groomed.

I do not doubt that Intel, Nvidia, and Qualcomm will not only continue to advance their technologies to make you look better on video calls, but they will emulate each other’s tech features to create parity.

For now, on paper, Nvidia is out in front. But this is anyone’s race, and since appearance is essential to all of us, this could be a race that returns faster churn to the PC market to create an arms race on virtual physical improvements. It also suggests that, once this matures, there will be a ton of folks who you’ll be unable to talk into coming back to the office because their actual appearance will have significantly drifted from what you’ve seen on the screen.

Lastly, a related aside: Video dating will increasingly lead to in-person disappointment. Though, I think it would be fun to create a 3D avatar of my 23-pound Maine Coon cat and have him virtually attend meetings with my voice. At my age, I’m more interested in having fun than getting that next promotion.

I’ve made the chiliPAD and its follow-on the Ooler (around US$699 for one person, $1,399 to 1,499 for two) my product of the week a few times now. But one of the problems has been the pad, which tends to stain and is hard to clean. It also didn’t breathe well, resulting in it being hot when the Ooler wasn’t on.

Well, the folks at Chili Technology just did a partial refresh and sent me the new pad. It is incredible in that while it still has one side similar to the old pad, if you flip it, the other side resists stains and breaths far better. So if you, like me, tend to be hot at night, it’s more effective at lowering how warm you feel. 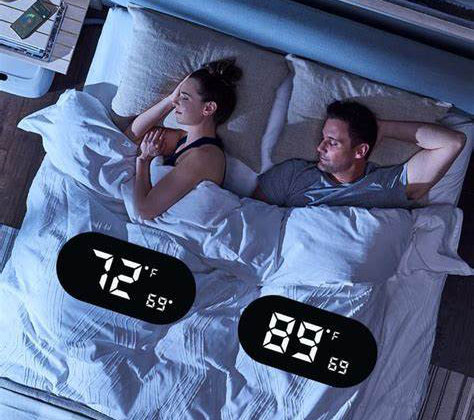 One of the things I like about the Ooler (costs about $200 more than the chiliPAD) over the chiliPAD is that you can set a script where it’s cool at night but toasty in the morning, so you wake up to being warm rather than an alarm.

I like to sleep with the window open at night, and, even on a warm night, the Ooler makes this possible. It uses water as the heat transfer mechanism, similar to how race drivers and astronauts cool their suits. I should point out that you need to use distilled water, or the minerals in the water will build up in the system and cause it to fail.

The new pad is an excellent improvement to the Ooler, so I thought I’d refresh it as my product of the week. Oh, and as a side note, it is kind of cool that my gaming systems and my bed are both water-cooled.

The 50th Anniversary of Apollo 11: There and Back Again

Congress vs. Big Tech: Breaking Up Is Hard (and Stupid) to Do