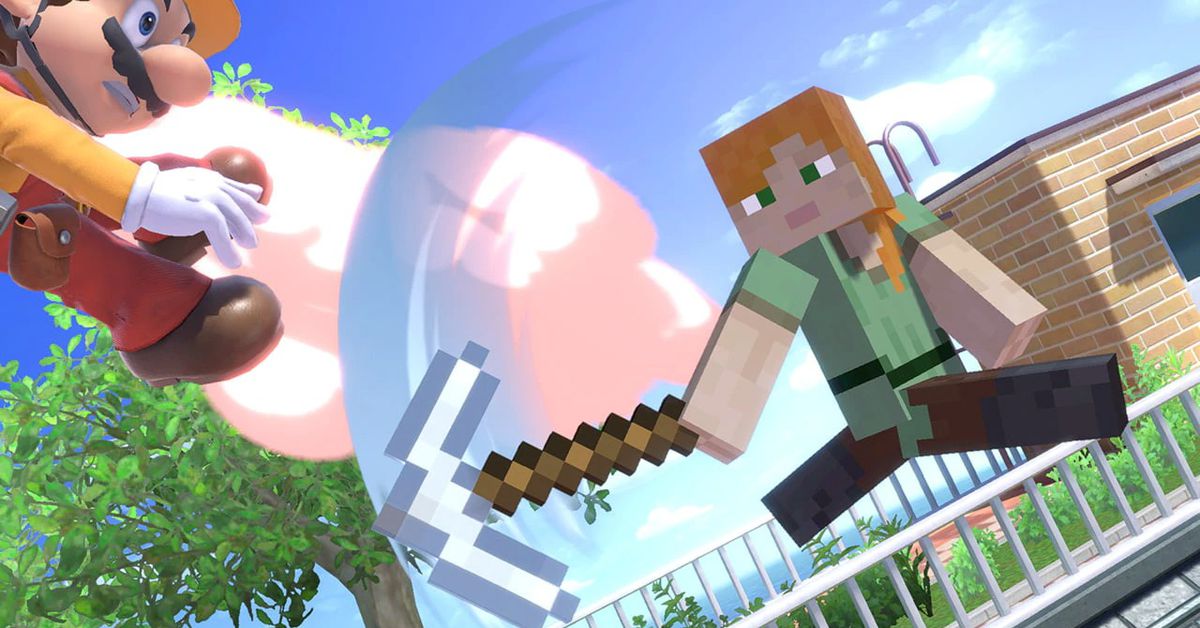 Talk to any of my friends that have played Super Smash Bros. with me, and they will tell you that I have a consistent (and probably predictable) fighting style. I love to rush at my opponents, get in their faces with a flurry of attacks, dodge out of the way, and then go back in for another barrage. I do this over and over. But when playing as Super Smash Bros. Ultimate’s new Minecraft character, I can’t fall back on that approach. Instead, I find myself doing a lot of mining.

The act of mining is simple: just hold the B button. Your Minecraft character of choice — you can play as the game’s default Minecraft characters Steve and Alex as well as a zombie and an enderman — will then start automatically mining materials from the ground, and you can see what you’ve collected above your character portrait at the bottom of the screen.

Collecting resources and crafting is critical to making your character competitive in a fight. With the right materials, you can upgrade your wooden tools to iron, gold, and eventually diamond to make them more powerful. But you can also use those materials to craft blocks on the ground and even in midair, making them useful defensive and recovery tools. (I also get great pleasure making a long line of blocks just above the stage to walk above my opponents.)

The resource management makes me feel like I’m playing two games at once. For much of the time, I’m actively avoiding fights, trying to dig unassumingly in a corner so I can fill up my resource meter and upgrade my weapons. Eventually, I’ll switch tactics, rushing back in with my usual in-your-face style. But when my weapons break or I run out of materials, I hunt for a quiet spot on the stage to dig up some more goodies again. It actually reminds me of the flow of a Fortnite match, where I’m constantly balancing the hunt for resources and weapons with skirmishes across the map.

While the characters have a lot of unique mechanics, there are also moves that will be familiar to Smash fans. I still find myself regularly winding up for big sword swings, and I often jump above another player to then smoosh them with an anvil, similarly to Kirby’s infamous stone drop.

Another thing my friends will also tell you about my Smash style: I love the weirder characters on the roster. I ferociously guard edges with Piranha Plant by spitting spiky balls at my enemies. I keep opponents at bay by tossing Pikmin as Olimar. I live for landing a level 9 hammer with Mr. Game and Watch.

And I think that’s part of why I love the inclusion of Minecraft in Super Smash Bros. Ultimate so much. In a series renowned for including weird characters and mechanics, the Minecraft character is possibly the strangest of them all. Somehow, though, Nintendo combined the opposite ideals of Smash Bros.’s frenetic action and Minecraft’s meditative mining into a character that represents both. My friends won’t know what to expect from me anymore.