In Star Wars, good and evil are usually pretty clear-cut. The heroic Rebel Alliance are the good guys, the Galactic Empire with its legion of Stormtroopers, are the bad guys. Likewise, for the Jedi and Sith. For most of the movies, none of this is really designed to be subtle. (Pro tip: anyone who builds a spaceship called “The Death Star” is probably not a good guy.)

In The Mandalorian, things are a little grayer. Part of that is because our hero — a bounty hunter who already lives and works in some morally questionable areas — is a little less clean-cut than the almost painfully earnest Luke Skywalker or Rey of films past.

But part of that is because the New Republic itself, as a governing body, is already a very different organization than the idealistic Rebel Alliance that worked to overthrow the Empire. Fighting a war against a clearly evil fascist organization is relatively straightforward; running a galaxy-wide government in the aftermath is much more difficult. And that means the Republic doesn’t always represent the good guys anymore. 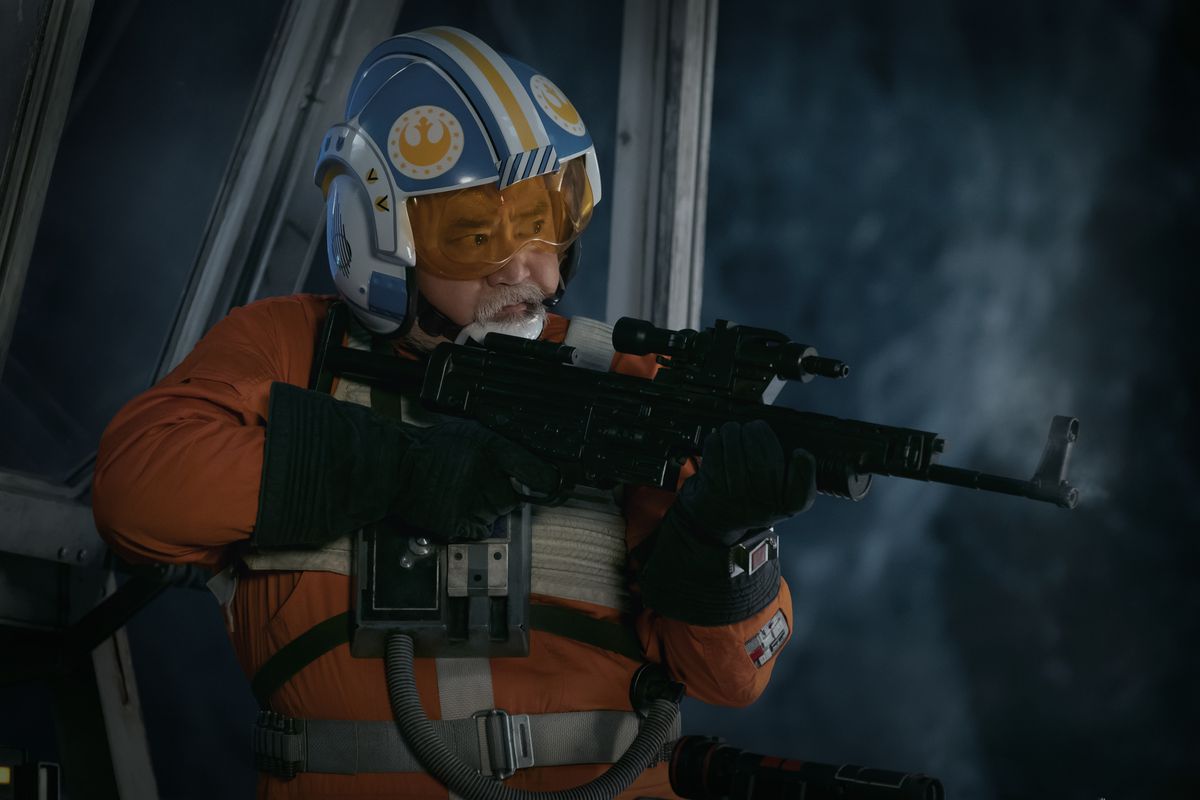 Nowhere is that more apparent than one of the most striking scenes in Mandalorian season 2, episode 2, “The Passenger,” when the Mandalorian’s ship, the Razor Crest, is pulled over by what is effectively a pair of New Republic traffic officers. We know that the Mandalorian isn’t actually doing anything wrong here. Transporting a struggling single mother to reunite her with her husband to save her family line surely isn’t a crime, even in the Outer Rim.

But after running the Star Wars equivalent of his plates, the duo (one of whom is played delightfully by Paul Sun-Hyung Lee, a longtime Star Wars fan and star of Canadian sitcom Kim’s Convenience) is concerned about the Mandalorian’s past escapades raiding a Republic prison transport last season. The comms go dark, and then, wordlessly, the two X-wings lock their S-foils in attack position.

It’s a moment that works so well because of all the history that the franchise has with the iconic starfighters. Time and again, Star Wars fans have come to associate the action as the prelude to epic space battles and daring dogfights. But here, the action becomes sinister. The Republic isn’t on the Mandalorian’s side, and those X-wings aren’t looking to save the galaxy; they’re preparing to gun down the bounty hunter, Baby Yoda, and the frog lady and her eggs that the Mandalorian is transporting.

Of course, this ends up largely being a misunderstanding: the X-wings return in a heroic blaze of glory later on to rescue the Mandalorian and his friends from the horrific krykna spiders (which I would truly, personally love to never have to see again), and they let the Mandalorian go due to his life-saving actions on the prison barge last season. But it’s the first time Star Wars has presented the New Republic in a way that isn’t entirely positive.

Things don’t end there, either. Given when The Mandalorian is set, we do know that the New Republic is ultimately doomed. Disney’s rebooted canon tracks the stagnation and decline of the revitalized government in the decades between Return of the Jedi and The Force Awakens. The New Republic fails to recognize the threat of the resurgent First Order, to the point that Leia is forced to abandon her governmental post and creates her own Resistance to fight back where the Republic will not. (And, as anyone who’s watched The Force Awakens knows, the fate of the New Republic is not a happy one.)

Whether the Mandalorian or Baby Yoda is around to see those events go down, however, is a question that will have to wait for future seasons.

Ubisoft Finds 25% of Staff Have Witnessed or Experienced Misconduct, Next Steps Outlined