A 23-year-old biomedical engineering student with dual residence in Tarragona, Spain and Irvine, Calif. is one of two first-place winners in the 2020 James Dyson Award announced on Thursday. Her invention aims to help women around the world afford the cost of early testing for breast cancer.

Benet’s experience with a dog at the University of Spain at Barcelona where she first started studying biology sparked her interest to find the biological code for detecting cancer. The dog could smell a patient’s breath and detect if the patient had lung cancer.

“That piqued my interest in studying how the dog’s biology could do this,” Benet told TechNewsWorld.

That experience led her to a program of biomedical study at the University of California at Irvine. There she met a professor and worked with a colleague who became her mentor on The Blue Box research and development.

“I believed this device is something that the world needed. I refused to stop until the world told me otherwise,” she said.

This year was record-breaking for the James Dyson Award, which has now financially supported 250 promising inventions from young engineers and scientists around the world. Despite the trials the pandemic has brought in 2020, the award received its highest number of entries. The quality was exceptional, highlighting the ingenuity of young inventors, according to James Dyson Award officials. 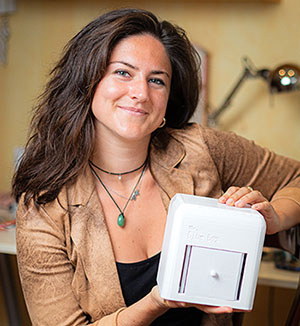 James Dyson, a British inventor, industrial designer, landowner and entrepreneur, founded Dyson Ltd. He is best known as the inventor of the Dual Cyclone bagless vacuum cleaner, which works on the principle of cyclonic separation.

“Unfortunately, I have witnessed first-hand the harrowing effects of cancer and as scientists and engineers, we should do anything we can to overcome this terrible disease. Judit is using hardware, software and AI together, in an impressive way, to create a well-designed product that could make cancer screening part of everyday life,” Dyson said in a prepared statement.

The data The Blue Box collects and stores in the cloud will provide insight that can enable more precise treatment and expand global knowledge of Cancer, he added.

“She deserves all the support she can get as she navigates the highly complex system of medical approvals,” said Dyson.

The other first-place award this year goes to 27-year-old Carvey Ehren Maigue from Mapua University in Manila, Philippines. He invented the AuREUS System technology, the first-ever sustainability winner of the James Dyson Award.

It is a new material, made from waste crop. The material converts UV light into renewable energy.

This year, over 300,000 women will be diagnosed with a form of breast cancer. Being able to test — and test regularly — for breast cancer is extremely important.

However, many women skip testing due to the high cost ($170 and up). The physical pain that a mammogram can bring is also a deterrent for women putting off testing.

Benet’s The Blue Box steps in to solve this problem. It is a biomedical device for pain-free, non-irradiating, non-invasive, low-cost ($60) and in-home breast cancer testing. The device itself works within 30 seconds, and results are achieved through a simple urine sample.

“The name comes from the notion of having the world see it as a box that is blue and nothing else to eliminate fear and worry about cancer,” she explained.

Once the algorithm has reached a diagnosis, the results are sent back to the user’s phone and displayed in The Blue Box app. The app pairs with The Blue Box and serves as a transmission system to the cloud-based analysis.

Not a one-time use device. The model Benet has in mind is when The Blue Box gets on the market, women can buy it online. It can be used by other family members as often as necessary for no additional costs.

The device will eliminate the current need for women seeking breast cancer screening to attend hospitals or medical facilities and undergo an invasive, sometimes painful, and often costly procedure.

According to The Center for Disease Control and Prevention, 40 percent of women skip their breast cancer screening mammogram. This results in one-in-three cases being detected late, which leads to a lower chance of survival.

The device is not marketed yet so there is no functioning cloud connection for public use, Benet noted. That will come in later stages. For now, Benet is using urine samples collected at the hospital’s research center in Spain.

She set up a company based in California called The Blue Box Biomedical Solution, to prepare for the marketing efforts once development is completed. 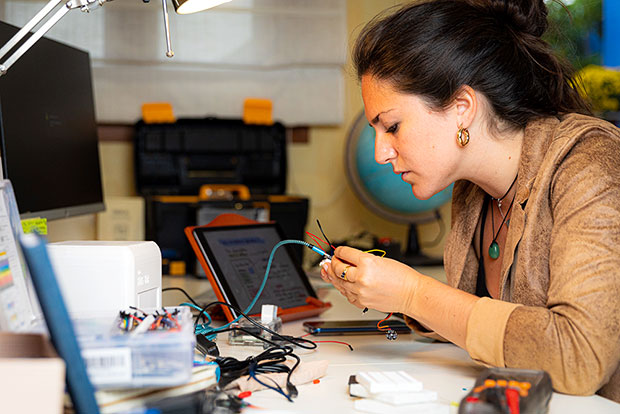 Benet was born in Spain and moved to California as a young design student. She continues to conduct research at both the California and Spain university facilities. Because of the coronavirus restrictions, she is temporarily forced to stay in Spain.

She said both locations have strong biomedical research centers so each location will contribute to the development and marketing of The Blue Box.

The next step is the trial studies collecting samples in the hospital and verifying its accuracy. Benet must make sure that the device meets both European and U.S. FDA standards for approval before she can market it.

The next few years are crucial as Benet and her team work toward the final stages of prototyping and data analytics software at the University of California Irvine. They are ready for human studies and clinical trials alongside vital patent filings

“The Blue Box has the potential to make cancer screening a part of daily life. It can help to change the way society fights breast cancer to ensure that more women can avoid an advanced diagnosis,” Benet said about winning the top prize this year.

The day that James Dyson told me that I had won the International prize was a real turning point, as the prize money will allow me to patent more extensively and expedite research and software development I am doing at the University of California Irvine, she added.

“But, most of all, hearing that he believes in my idea has given me the confidence I need at this vital point,” she said.

Jack M. Germain has been an ECT News Network reporter since 2003. His main areas of focus are enterprise IT, Linux and open-source technologies. He is an esteemed reviewer of Linux distros and other open-source software. In addition, Jack extensively covers business technology and privacy issues, as well as developments in e-commerce and consumer electronics. Email Jack.

A Vision of the Future From Dell World

Threat From Above: How to Stop Hostile Drones