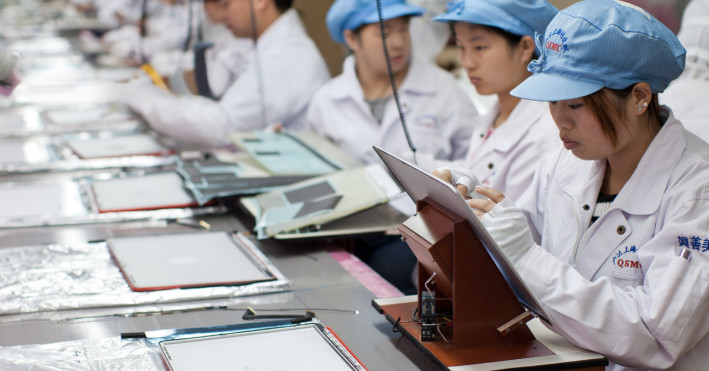 Apple has been complicit in its suppliers’ violations of Chinese labor laws, according to a report from The Information. Suppliers have periodically filled their factories with temporary workers or “dispatch labor,” violating a Chinese labor law requiring no more than 10 percent of a factory’s workers be temporary employees.

Much like in the US, temporary employees in China receive lower pay and fewer benefits, and they’ve become increasingly common as interest in factory jobs has shrunk according to The Information’s sources. The law limiting the use of dispatch labor came into effect in 2014, and that year Apple conducted a survey of its suppliers in China to determine how many already complied. The company found that among 362 factories, “nearly half were over the quota for temporary workers,” according to a presentation The Information reviewed.

Despite that figure, not much had changed by 2016 and the end of a grace period for complying. Three former members of Apple’s “supplier responsibility team” said that the company “took no major action against its suppliers for violating the temp-worker labor law out of concerns it would create costs, drain resources and delay product launches.” If the claims are true, it’s notable because Apple says it applies its supplier code of conduct policies equally across its supply chain, which should prevent these kinds of violations from happening.

New data Apple collected in 2018 shows the problem continued. The Information says that a Quanta factory manufacturing Apple Watches hired 5,000 temporary workers to bring its workforce to 18,000. That’s around 27 percent temporary workers, above the 10 percent limit set by the law.

This isn’t the first time labor laws have been violated on Apple’s watch. In 2019, Apple actually admitted to at least a portion of this dispatch labor problem in its dealings with Foxconn. Foxconn had exceeded the 10 percent limit, despite previously agreeing multiple times to stop. And just last month another supplier, Pegatron, violated student labor laws and falsified its records to cover it up. Apple’s reported response was to put the company on “probation,” preventing it from conducting any new business with Apple until the problem was resolved.

Despite the Pegatron example, punishments have still not been broadly applied. Limits on temporary labor are an issue that all large tech companies manufacturing in China have likely been dealing with, but it’s Apple’s desire to “surprise and delight,” along with maintaining aggressive production quotas, that have potentially worsened the problem. In a quote from the report, an unnamed Apple executive admits as much: “We are making it difficult for our suppliers to comply with this law as 10% dispatch is simply not enough to cope with the spikes in labor demand.”

Apple is aware this is an issue, but until it’s willing to step in and take bolder action, suppliers will take shortcuts to keep Apple’s business.

Tech Job Market Hot for the Near Future