This story was originally published on July 27, 2020. It is presented today as part of our Best of ECT News series.

Much of my time these last few weeks has been spent looking at schools and companies that tried and often failed to pivot to remote work and education.

One of the biggest problems has been connectivity. Our infrastructure just wasn’t set up to suddenly shift massive amounts of traffic from companies to homes. Exacerbating this has been cable networks where you have shared capacity because they were built out with the idea that most folks wouldn’t be using them at the same time.

VPNs, which remain common (I’m not a fan), don’t help because they tend to take up an excessive amount of dedicated bandwidth.

5G, which has been wrongfully highlighted as a problem during the pandemic (there are way too many folks wearing tin foil hats at the moment), might be the only realistic way to deal with these issues on a sustained basis.

Let’s talk about 5G this week, and I’ll close with the current best smartphone in the market, the One Plus Pro — and I’ll explain why it stands alone.

We Weren’t Ready for Remote

Loading issues, network failures, and even one huge outage that knocked me out of a critical Zoom meeting showed me that I wasn’t in as great shape as I thought. Now, since I travel — or did before the pandemic — I have a 4G WiFi access point, but I quickly discovered that the 4G coverage where I live not only wasn’t great, the device could only handle one PC well. If my wife suddenly wanted to stream a video or use her PC, the result was ugly.

Now, typically, if this were to happen to most of us, it would happen at night where we might miss some streamed TV. But now that we are at home, the outage adversely affected not only our work product but our image; because if you can’t connect, for some weird reason it seems to reflect on your competence.

I watched this happen to a CTO from a significant company, and the other folks on the call started making fun of the guy even though we all knew it wasn’t his fault. But especially when you are the main speaker, the failure can reflect poorly on you in front of your peers.

Adding to this problem is the fact we’re dealing with aging infrastructure. A lot of the old telephone and cable lines were buried years ago, and those running overhead are vulnerable to weather and catastrophic failures.

The Pandemic Makes This Problem Scary

Now, this is undoubtedly problematic for work and school. However, with the pandemic, you now have a lot of folks who are being cared for at home by telemedicine to both protect their health and the health of health care providers. The telehealth hardware they have needs a network connection; and while it may have a 4G backup, the lack of 4G bandwidth and the likelihood that several homes during an outage could overwhelm the available bandwidth is uncomfortably high.

Oh, and while newer hardware may have a 4G connection, older hardware may not. So, given the enormous ramp-up in demand of people needing this equipment, and the limitations on manufacturing new hardware, spot shortages of even old equipment are likely to increase.

Furthermore, we have another new issue with telemedicine, and that is security. Not only is the data protected by pretty stiff government regulations, should the hardware become compromised, but it could also result in a tragic outcome.

In short, it may no longer be that your video streaming, children’s education, and job (notice my priorities) depend on the network, but your life may depend on it as well.

5G to the Rescue

We talk about 5G in terms of increased bandwidth, but its value is far higher.

5G resulted from a colossal effort to address the problems we discovered in the decades that preceded. For instance, it doesn’t just have more bandwidth — it handles the bandwidth differently so that it performs well even at the network’s edge — something that prior versions did not do well. Given how we are likely going to be depending on 5G across broad geographic areas, that network performance is critical.

Added to that is a little-known technology called “millimeter wave.” This technology provides a better way for signals to move within buildings and around obstacles. Places where a 4G device would struggle, 5G devices with millimeter wave should work far better. This capability is critical for things like connected security cameras that might be used to monitor children or patients at home to ensure they are safe and either doing their schoolwork or not doing things that could put their health at higher risk.

But really, the big thing is that once 5G is up in an area, it is very simple, relatively inexpensive, and fast to provide someone with a 5G modem to give them reliable high-speed Internet coverage. No pulling cable or fiber, no rolling a truck to wire their house; just plug in the 5G access point (which should also have WiFi 6) and voilà: You have a reliable, fast, secure connection to the Internet.

Pulling cable and fiber, particularly during a pandemic, is problematic; and up until now 5G wide area technology wasn’t as fast or secure as we needed it to be. Had 5G been just a few months faster on the rollout, it would have been perfectly timed to be ready for the pandemic. But it is rolling out now in many areas; and with that, soon our jobs, kids’ schooling, and our very lives may depend on this technology.

I didn’t have a 5G phone yet, and since no one sent me one, and it was my money, I figured I’d see if I could find and buy the best 5G phone out there. I knew it wasn’t going to be a cheap date. My last phone from Motorola cost around US$450, and it has been a champ, but it wasn’t 5G.

Now, if you are in the US, you don’t just want 5G — you want millimeter wave (mmWave) — and there are only three phones in the market that have that (that I could find). They are the Samsung Galaxy S20+ 5G, the LG V60 ThinQ 5G UW, and the One Plus 8 Pro. But the only phone that had the full suite of technologies was the One Plus 8 Pro, so I ordered it from Amazon and three days later I got the phone.

This phone is the first phone I’ve gotten that has the fingerprint sensor under the screen, which makes it a ton easier to hit than the sensors on the back of the phone. By the way, the Apple face recognition stuff, as many are now discovering, doesn’t work that well when you are wearing a face mask, which makes the fingerprint sensor far more reliable and important.

My One Plus 8 Pro is a deep metallic blue. It also comes in green and black, but the blue I got looks the best to me — and it is one of the prettiest phones I’ve ever seen. It is both narrower and slightly taller than the Motorola I’m retiring, but that makes it fit better in my hand.

It’s waterproof and lacks a headphone jack, which is fairly standard in waterproof phones, and it uses wireless charging, which I’ve become a fan of because I often plug my phone into the charger at night in a darkened room (because my wife often goes to bed before I do) and finding that damned USB-C socket has become rather annoying.

The display is to die for because it has an insanely fast refresh rate of 120Hz and it samples at 240Hz, which is what you see on a gaming PC, not a phone. It also uses Pixelworks high-end technology, which provides both a better image and lower power requirements over phones that don’t have this component. 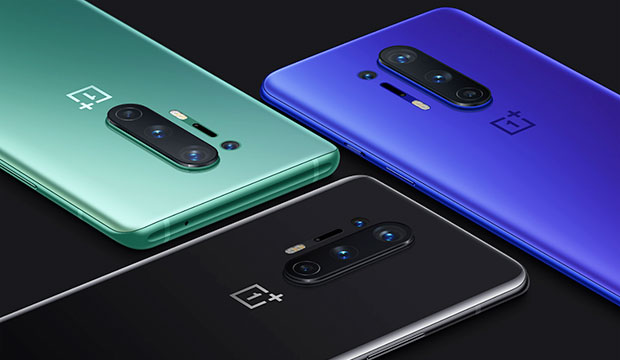 The One Plus 8 Pro has four cameras on its back. An 8MP hybrid with 30x digital zoom camera, a 48MP wide-angle camera, a 48MP main camera, and a 5MP color filter camera. While this is likely more than most of us need, the pictures it takes are stunning, even in the dark.

Oh, and this is one of the few phones that has Qualcomm’s amazing 865 processor making it around 25 percent faster than earlier smartphones, like the current generation iPhone. It also has fast charging, which gets you to a 50 percent charge from dead in 23 minutes.

Another area where this phone stands out is sound, which is impressive. It is hard to believe this kind of sound comes out of such a small device. Although I usually use wireless earbuds so I don’t drive my wife nuts, the ability to stream music while I’m working on my car and have that music sound amazing is a real plus. Also, it’s one of the Dolby Atmos phones which means it is good with movie soundtracks.

At around $900, it isn’t cheap, but prices under many of the other top phones in the market, making it kind of value — but not the value the earlier One Plus phones were. Keep in mind that most of the performance benefits from this phone will happen when you are in the range of a 5G cell tower and a mmWave transceiver.

High-Tech Workouts With Activ5: No Gym, No Problem

The OM System OM-1 is a post-Olympus flagship camera