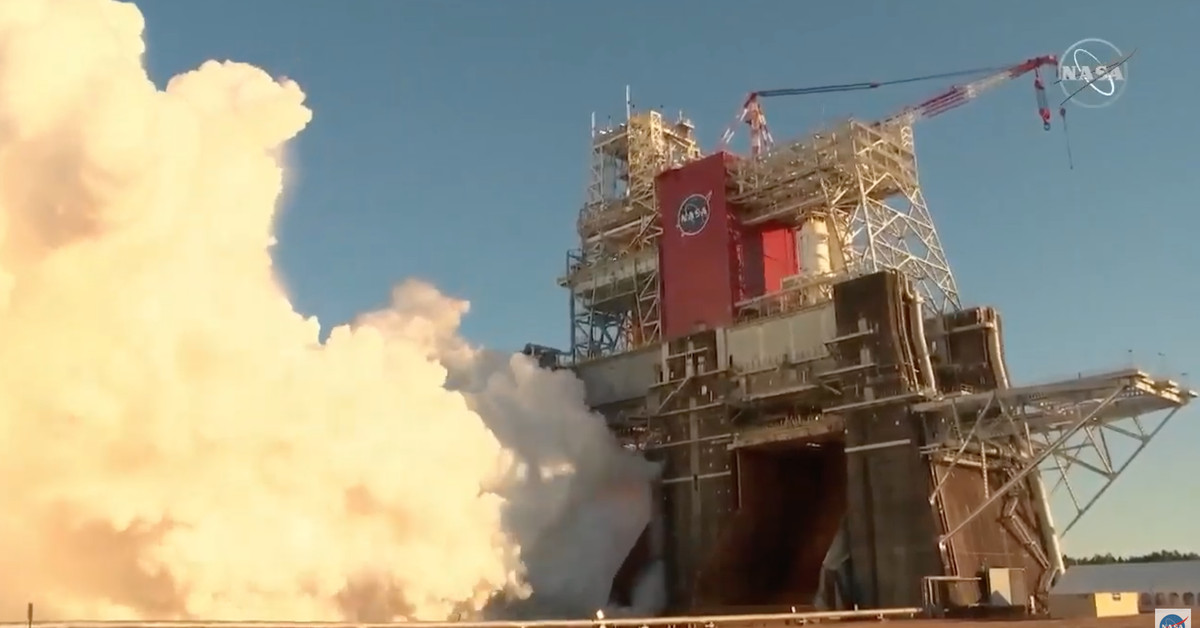 A critical NASA rocket test ended with a shutdown on Saturday, a little over a minute into what was planned to be an eight-minute test. This trial run was a vital checkpoint for NASA’s much-delayed Space Launch System. The SLS is set to play a key role in the agency’s Artemis program which aims to return astronauts to the Moon.

During today’s Green Run test, the four rocket engines in the SLS core fired for a little over a minute while anchored in NASA’s rocket test stand. The team had planned to have the engines fire for approximately eight minutes, or about the same amount of time it will take to launch future missions to the Moon.

Instead, around a minute into the NASA broadcast of the test, a voice is heard saying “we did get a MCF [major component failure] on engine 4.” At around the same time, engineers spotted a flash near engine four, said John Honeycutt, NASA’s SLS program manager in a press conference. They think that the flash occurred somewhere near a thermal protection blanket around that engine. The exact cause of the shutdown is still unknown.

A blog post from NASA said that the flight software ended the test. “At this point, the test was fully automated. During the firing, the onboard software acted appropriately and initiated a safe shutdown of the engines,” the statement from NASA says.

The engineering team had hoped to get at least 250 seconds of the hot fire test, John Shannon the SLS program manager at Boeing, said a press conference earlier this week. “[If] we had an early shutdown, for whatever reason, we get all of the engineering data we need to have high confidence in the vehicle at about 250 seconds” said Shannon. During that time they planned to have the engines move through a series of maneuvers designed to test the responsiveness of the engines while they were lit.

It appears that they got far less than the 250 seconds of data that they hoped for. The data that they did manage to get was gathered by about 1,400 sensors during the test. Among other things, the sensors monitored the core for vibration, temperature, acoustics, and stress. Even though the test was cut short, those sensors did gather a lot of data that may eventually help NASA determine the path forward.

“Not everything went according to script today, but we got a lot of great data,” NASA Administrator Jim Bridenstine said at a press conference after the event. “I have absolutely total confidence in the team to figure out what what the anomaly was figure out how to fix it, and then get after it again.”

The SLS has been in development for years, and was originally scheduled to make its flight debut in 2017. Instead, it has been plagued by delays and is massively over budget. NASA had previously pushed back the rocket’s debut to November 2021, and was still hoping to make that launch date, even after a December 2020 delay in their testing schedule.

The rocket being tested today was slated to be part of that first launch out of Cape Canaveral — an uncrewed mission called Artemis I that would send NASA’s Orion spacecraft around the moon. It’s still unclear what exactly triggered the shutdown, and how the results of today’s test might affect the timeline for Artemis I.

“It depends what the anomaly was and how challenging it’s going to be to fix it. And we’ve got a lot to learn to figure that out.” Bridenstine said. ”I think it very well could be that it’s something that’s easily fixable and we can feel confident going down to the Cape and staying on schedule. It’s also true that we could find a challenge that’s going to take more time.”

Update 9:00PM ET: This story has been updated with information from a NASA press conference.

Tenet will be released internationally first because the US is a...