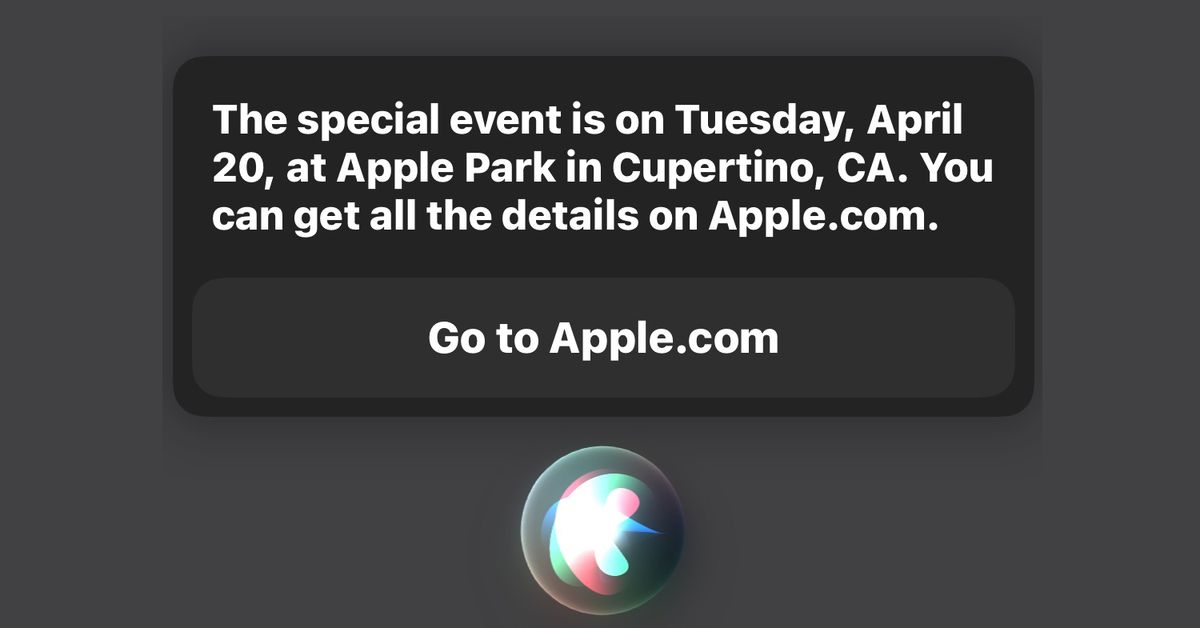 Siri appears to have spilled the beans on the next Apple launch event. MacRumors was first to report that asking the voice assistant “When is the next Apple Event” prompts it to say April 20th. We’ve managed to get the same response, though only on a device that’s associated with a US Apple ID. Apple typically announces its events with invites sent out a week in advance, meaning the news should become official later today.

“The special event is on Tuesday, April 20th, at Apple Park in Cupertino, CA. You can get all the details on Apple.com” says Siri. Tapping the link takes you to the standard Apple Event landing page, where the launch isn’t listed. It seems odd that the response claims the event is happening in Cupertino, since this will almost certainly be another of Apple’s pre-recorded online-only events.

“The special event is on Tuesday, April 20th, at Apple Park in Cupertino, CA.”

The message itself doesn’t give any hints about what Apple might be planning to announce at the event. However, recent rumors point towards new iPad Pro models, at least. Bloomberg recently reported new iPad Pros will debut in April. The 12.9-inch iPad Pro will reportedly be Apple’s first device with a Mini LED screen, allowing it to offer a high contrast ratio without the risk of burn-in associated with OLED displays. Reports indicate that the new iPad Pros could be in short supply due to production issues Apple is facing with the Mini LED displays. Other rumored iPad Pro upgrades include new processors with a similar amount of power to the M1 chip found in Apple’s recent MacBooks, better cameras, and USB-C ports with faster transfer speeds.

There are rumors that Apple is also close to launching its long-rumored AirTags. The location tracking devices, which should allow users to keep track of items using Apple’s Find My software, were expected to launch last year but ultimately never appeared. With Apple recently opening up its Find My network to track items from third-party companies, the stage is now set for the launch of its own physical trackers.

Unless Siri is lying, the invitations should arrive imminently.

In case you’ve ever wanted a cybernetic lynx skull Bluetooth speaker, there’s a Kickstarter for that

How to watch The Simpsons in its original aspect ratio on...