Apple’s strategy, which has worked well financially up until now, is called “vendor lock-in.”

This approach, pioneered by IBM until it almost put the company out of business in the 1990s, is incredibly profitable, but it treats customers like a resource to be mined. It restricts customer movement away from the platform to provide lower quality goods at higher prices because the customer can’t easily switch to something else.

In addition, with lock-in, the dominant vendor can easily replace third-party apps and products with their high-cost alternatives by crippling or just creating FUD (fear, uncertainty, and doubt) around a third-party offering like, in this case, Tile.

U.S. senators heading antitrust issues have flagged this AirTags effort as potentially anticompetitive after Tile CEO CJ Prober started complaining because Apple could put his company out of business — much like they did MusicMatch nearly two decades ago.

Granted, Apple has been blessed with stupid competitors, but it still presents, in my opinion, as one of the evilest companies I’ve ever followed.

Let’s talk Apple, lock-in, and antitrust this week, and we’ll close with my product of the week, my new favorite laptop, the new AMD-powered Surface Laptop in beautiful black.

If the vendor can maintain a customer focus and place trust as the top priority, then lock-in can be a viable and attractive strategy for both the vendor and the customer. This strategy did propel IBM to own what became the IT market into the 1980s effectively. You may recall that the phrase “nobody ever got fired for buying IBM” was almost a law during those times.

The founders, most notably Thomas J. Watson Jr., had a tight focus on customer loyalty and trust. But after they retired, over the decades that followed, the mechanism that assured that trust focus collapsed, and by the time I joined IBM in the early 80s, the focus on trust had shifted to a focus on revenue.

I recall a meeting with the then head of marketing for my unit where I pointed out that it seemed unfair that we were charging customers to fix problems we’d created. I argued that customers weren’t stupid and would figure this out to our eventual detriment. He argued back that, at the time, IBM effectively was “selling air,” and if the customers wanted to breathe, they had to pay IBM’s charges.

I’d been an auditor, had worked for IBM legal for a time, and this sounded way too much like extortion to me. As I thought, this practice didn’t end well. When customers figured this out, they left in droves, paying the high cost to migrate off of IBM’s platforms, resulting in the first premature termination of an IBM CEO, the first outside CEO hire, and the collapse of most IBM employee programs, including pensions.

In what seemed like a few weeks, IBM’s valuation collapsed, and the company went from unbeatable to terminal so fast that those of us in the firm almost got whiplash. Mass layoffs followed voluntary separation programs, and entire IBM lines became non-viable overnight.

Apple and Oracle are the only two companies I cover that still use lock-in, and those of us that have been on the wrong side of that strategy are unlikely ever to recommend either company as a result.

With a lock-in strategy, the customer has to take what you give them. You control the ecosystem. Suppose you see a third-party product with an exciting revenue and profit profile. In that case, you can copy it, disparage or cripple the existing product on your platform, and take that revenue and profit for yourself.

Tile is right to complain because Apple’s move could cripple Tile on Apple’s platform and cost the company, I’m estimating, around 30 percent of its revenue and profit.

It doesn’t matter if Apple cripples Tile on iOS and macOS or not; customers will believe that there is less risk with the Apple offering on Apple’s platform. Given these devices are placed on pets and gadgets you don’t want to lose, taking a risk your Tile won’t work isn’t worth it. Even someone like me who is everything but an Apple fan would suggest AirTags over Tiles on Apple.

I’m amazed that given how many companies Apple has taken out or betrayed over the years, firms still work with them.

Apple did something very similar to MusicMatch in the 1990s and has been somewhat infamous for eliminating competing apps from its App Store. Now, I’d argue that these anticompetitive practices are bad for Apple customers and are strategically bad for Apple as well.

Both Apple and Microsoft owe their early strategies to IBM, which was still vastly dominant when both companies were born. Microsoft demonstrated similar bad practices against Netscape in the late 1990s, ironically, most of which were massively ineffective given Netscape took itself out due to horrid management.

But this led to a European challenge on competitiveness that forced Microsoft to open up its APIs. After some heavy fines, Microsoft complied and flipped its strategy from focusing on lock-in to focusing on customer satisfaction and loyalty. Then, instead of fighting Linux and open source, Microsoft embraced both, which helped result in its renaissance with a new, more positive image, and improved competitiveness.

Microsoft is now viewed as a much more positive vendor, a much more positive partner, and the allegations of product theft, customer abuse, and antitrust have largely evaporated. The company is not only performing better consistently, but it is again one of the more-preferred vendors by those who chose vendors as a profession — and that was becoming increasingly not true before Microsoft made this pivot.

One of the extensive initial tests is whether the vendor’s profits and revenues are out of line with its industry when looking at anticompetitive behavior. Customers will buy on price, and while they may pay a little more for better service, it is more an incremental difference than a massive one.

Apple’s financial performance is so far beyond what any other company in this segment is doing that it puts a red flag on it regardless of whether they are doing anything wrong. The lock-in strategy it favors is another red flag, and this move with AirTags is yet another.

With the U.S. and EU looking at Apple with anticompetitive glasses, the company is likely to get stepped on hard by more than one government. As we saw with Microsoft, these events tend to create a me-too race of local and national governments wanting their piece of Apple’s financial pie. The cumulative impact of this could eventually devastate Apple’s financials if it doesn’t change the alleged behavior.

Apple has dodged several bullets like this. But eventually, just like what happened to Microsoft, one will hit if the company doesn’t stop making itself a target.

It isn’t often I get a laptop in that feels like a piece of art. The Microsoft Surface line was created to address the perceived threat of the Apple iPad that never really materialized. Now you could argue it didn’t materialize because of Surface. Still, much of that lack of success had to do with Apple not being able to sell into enterprise accounts and its excessive consumer focus.

I’ve always wondered if the first Surface was a mistake because, back then, the Intel platform wasn’t good in a tablet form factor, having a fraction of the battery life and more weight. I would have argued that doing something like Surface Laptop , which has long been my overall favorite Surface product, is a better hedge because it showcases more of the benefits of the x86 platform.

A 15″ screen is too big for a tablet, but just about the right size for a laptop you will use as your primary PC. Like Apple products, the Surface Line tends to be formed over function; in other words, the design focuses on building something that looks beautiful.

This laptop in black reminds me of the artistically designed Dell Adamo line of years ago. It is very sleek, with a matt black finish and a glossy Microsoft logo that, I think, shows better than the iconic Apple logo does on its products. I don’t think photographs do the product justice. The finish does show dust but seems to resist fingerprints. So you’ll want a cloth to wipe it down if you plan to show it off. 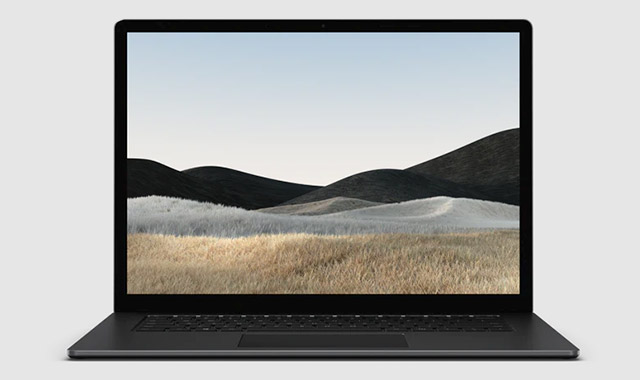 At 3.4 lbs., this is one of the lightest 15″ laptops in the market, and it has a decent 17+ hour max battery life — suggesting most should get above 10 hours in everyday use. That’s more than plenty in our current work from home standard, but it should also do well in our coming hybrid working world. Granted, 15″ is generally too big to work in coach on an airplane, but you can use it to watch movies.

Surface Laptops use the Windows optimized 3:2 aspect ratio, which is still, surprisingly, pretty unique given it is Windows optimized. (Makes me think the other Windows OEMs missed a meeting.) It is touch- and pen-enabled, though using a pen on a non-tablet probably isn’t a high priority for most. Solid-state drive (SSD) options range from an adequate 256 GB to 1 TB for those that don’t get how the cloud works.

Ironically, Surface uses a unique magnetic charge port that was exclusive to Apple until it abandoned a similar technology. It is also ironic that the only laptop I’ve ever broken by tripping over a power cord was a pre-magnetic Apple notebook. That magnetic power cord could be a lifesaver if you work at home with kids or pets, and you have, like I do, tile floors rather than carpets.

Thin products like this often sacrifice ports. You don’t get an HDMI port in this laptop, but you do get a full-sized USB-A, USB-C, and a headphone jack in addition to the magnetic charging port. The front-firing HD IR camera is OK for Zoom and Microsoft Teams meetings; and works with Windows Hello nicely as you would expect.

In the end, why I love this laptop is that it is damned good-looking, and given this is a status product, that is a requirement that turns the AMD Ryzen Microsoft Surface Edition into my product of the week.