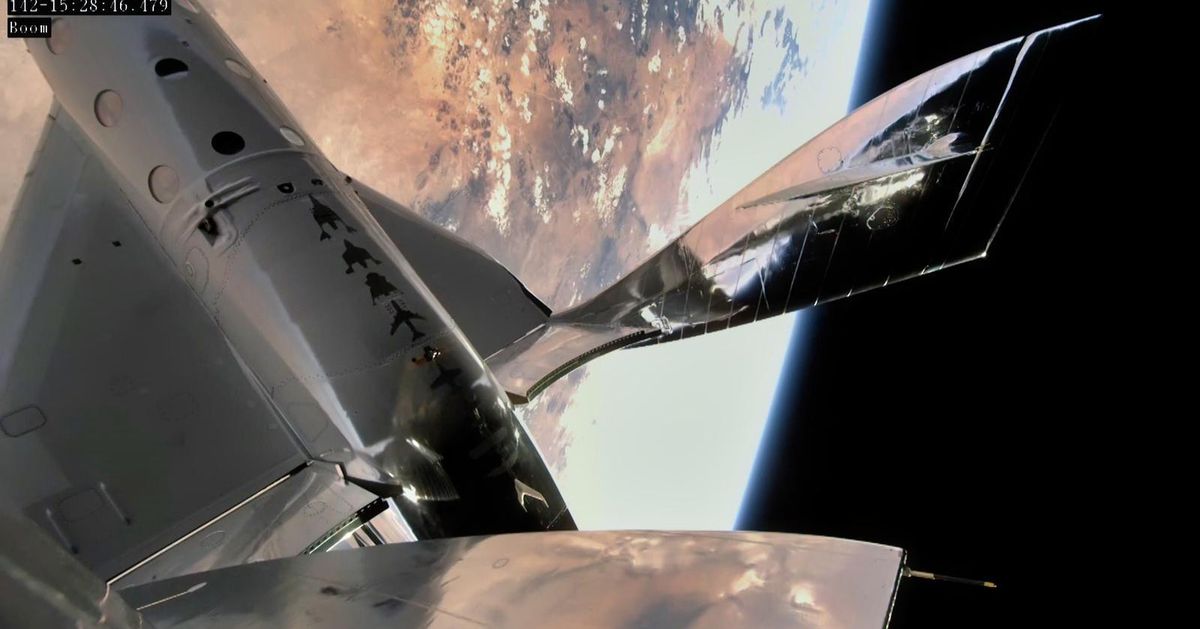 Richard Branson’s Virgin Galactic completed its first successful space flight in more than two years on Saturday, with its crewed VSS Unity spacecraft carried to an altitude of more than 44,000 feet before gliding safely back to Earth. It marked the first spaceflight from New Mexico, making it the third US state to launch humans into space. The Zia sun symbol of New Mexico’s state flag was displayed on the outside of the ship.

Virgin’s VMS Eve carrier aircraft took off from Spaceport America in New Mexico at about 10:35AM ET with Unity aboard. About 10 minutes before its release, Unity switched to its own battery power, and conducted flight control and electrical checks. Once released by Eve, Unity’s pilots C.J. Sturckow and Dave Mackay ignited the rocket motor, then shut it down a few minutes later, with the spacecraft’s momentum keeping it traveling toward its apogee, or highest point.

Unity reached a speed of Mach 3 after it was released from Eve, and reached space at an altitude of 55.45 miles. It reached apogee at about 11:30AM ET, did a slow turn, then glided back into Earth’s atmosphere, landing at about 11:43 AM ET on the same Spaceport America runway where its flight began.

“It was picture perfect,” Virgin Galactic CEO Michael Colglazier told The Verge in a phone interview Saturday after Unity and Eve were back on the ground. “We’re gonna go through the data deeply and thoroughly as we always do.” In a statement, Colglazier called the flight a “major step forward for both Virgin Galactic and human spaceflight in New Mexico,” which had never hosted a crewed test mission to space until today.

“You’ve never seen a mix of more proud parent engineers,” Colglazier said of Virgin Galactic’s engineering team. Dozens of company employees gathered to watch the test flight under clear blue skies at Spaceport America, the company’s HQ for future commercial missions. Champagne was popped to celebrate the craft’s landing and Branson, the company’s billionaire founder, was “electrified” to see it all play out, Colglazier said.

Saturday’s flight, which also carried research payloads for NASA’s Flight Opportunities program, is the latest step toward Virgin Galactic’s goal of a space tourism program. The company has some 600 reservations for tickets on future space flights, which go for around $250,000 each. Unity is able to carry up to six passengers and two pilots.

It was Virgin Galactic’s first space flight since 2019, and the third one it’s completed. Unity’s first two flights, in late 2018 and early 2019, were conducted at the company’s test facility at the Mojave Air and Spaceport out of California. Virgin Galactic later moved its operations to Spaceport America, where it plans to conduct all of its commercial tourist flights. The company had to abort its first flight attempt at the new facility in December, after Unity’s engine cut out early ahead of its glide back to Earth due to what the company later said was electromagnetic interference.

VSS Unity’s flight on Saturday featured some hardware upgrades installed since the December abort scenario, including a new digital controller that the pilots used for tighter handling. “This was our first run with it under full power, and it was flawless. Spot on,” Colglazier said. That controller will be used on SpaceShipThree, the company’s upgraded spacecraft tailored for routine production.

Virgin Galactic said in February, and confirmed during its May 10th earnings call, that it has a total of four spaceflights planned this year. The next one is slated to have two pilots and four Virgin Galactic employees as passengers, and a third flight is scheduled to have Virgin founder Richard Branson on board. Flight four is intended to be a commercial flight for the Italian Air Force, which should generate $2 million in revenue.

Saturday’s flight was the 400th commercial space launch licensed by the FAA. The dates for the future Unity flights are still to be announced.

Update May 22nd 2:17PM ET: Adds details from Virgin Galactic about the flight

Alfred Hitchcock – Vertigo Review – Tell us a Tale of Murder

Verge readers can save $60 on the Nest Learning Thermostat